Skip to content
Home News Eileen Gu: Navigating two cultures, judged by both of them 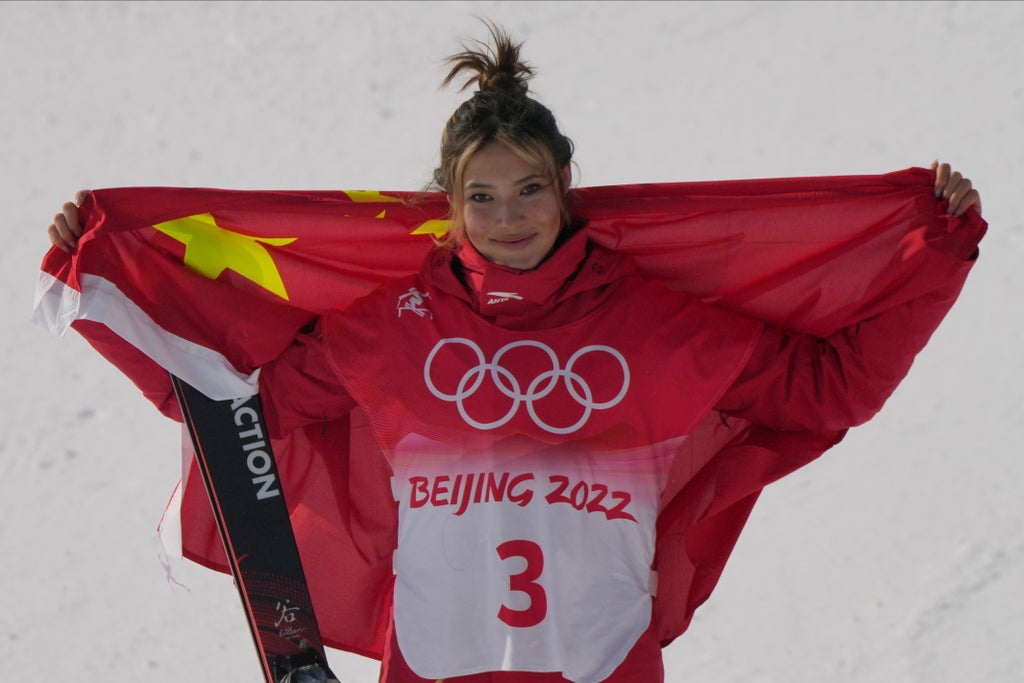 She is an exceptional athlete who has already won medals in the Beijing Olympics. But the fascination — some might say obsession — with Eileen Gu’s origin story has threatened to overshadow anything she does on the slopes.

As the freestyle skier chases gold in the mountains northwest of Beijing, some competing narratives about her have taken hold, from California to China.

Some have the San Francisco native skiing for the Chinese team to secure more lucrative endorsements. In others, she has betrayed the United States, where she was born and grew up, to ski for China, her mother’s home country.

And a third: She was way too young to have made the decision to “abandon” the United States for China, where a single misstep could lead a repressive government to restrict her movement or her speech.

The frenzy to “explain” Gu’s choice reflects biases and misunderstandings in the United States about Asian American identity. The stories about Eileen Gu are as much about the people telling them as they are about the athlete herself.

For her part, the 18-year-old athlete has said repeatedly that she was raised by two strong women—her mother and maternal grandmother—and she wanted to inspire girls in China, where there are few female role models in sports.

She has genuinely strong connections to China, just like many others in the Chinese diaspora who are taking advantage of opportunities and resources both in the Western countries where they grew up and in an increasingly wealthy mainland China.

“What she represents is a new trend,” says Yinan He, an associate professor of international relations at Lehigh University in Bethlehem, Pennsylvania, “simply because China has become so wealthy and powerful and attractive and generating opportunities not available to immigrants here.”

Gu is particularly well placed to take advantage of these opportunities.

As engineers retired from Chinese government ministries, their grandparents were part of the professional elite. Ella’s mother, Yan Gu, 58, left China in the 1980s to pursue graduate studies in the US and now works as a private investor with a focus on China, according to LinkedIn. Her father of her has never been publicly identified.

Gu had an upper middle-class upbringing and private school education in the United States, and she says she’s equally comfortable in both countries.

In 2019, according to the IOC, she became a Chinese national, but her full citizenship picture remains unclear. Gu has sidestepped questions about whether she gave up her US passport, and China does not recognize dual citizenship.

Gu has consistently refused to choose one country or the other. As she has written on Instagram, dichotomy is her favorite word of her. And she told the Olympic Channel in 2020: “When I’m in China, I’m Chinese. When I’m in the US, I’m American.”

Many immigrants and their children feel this duality. Few are allowed to live it.

Nonwhite immigrants and their descendants, in particular, face the double bind of being required to completely assimilate in order to be considered American, but also butting up against racist notions that prevent them from being accepted as truly American.

“Part of the Eileen Gu perplexity is that the West is seen as superior and the East is seen as inferior. So why would she want to represent China?” says Russell Jeung, an Asian American Studies professor at San Francisco State University, who has tracked the rise of hate incidents against Asian Americans and Pacific Islanders in the US during the pandemic.

“It’s sort of ironic because in half our cases, people use anti-Chinese rhetoric and are telling us to go back home. They’re telling us, ‘You don’t belong here. We don’t accept you.’ And then this is sort of the opposite: ‘Why aren’t you representing your home?'” he says. “And so we lose either way.”

It turns out that, in a world where elite athletes increasingly cross borders to compete, Gu is not that unusual.

No one thinks twice about a Senegalese winger in the English Premier League or a Japanese pitcher in Major League Baseball. At the Olympics, nation-shopping is fairly common: China’s men’s hockey team in Beijing is primarily made up of North Americans, many of whom had no connection to the country until they were recruited to ensure the home team didn’t get blown out.

Asian American representation at the Olympics has also come a long way.

In 1998, cable news network MSNBC used the headline “American beats out Kwan” to describe Tara Lipinski’s win over Michelle Kwan. Both figure skaters were born in the United States.

Today, Gu is also just one of many Asian Americans whose family immigration tales are on display at the Beijing Olympics.

Nathan Chen, who won a gold for the US in figure skating, was born in Utah to immigrants from China. Snowboarder Chloe Kim, who won her second gold for the US in the women’s halfpipe, was born in California to Korean immigrants. US figure skater Alysa Liu is the daughter of a man who left China in his 20s as a political refugee because he had protested the Communist government.

So what makes Gu the subject of such intense fascination? She is perhaps a perfect storm of elements.

Unlike many athletes who change countries to compete, Gu could have easily skied for the US team — and that perhaps heightens the feeling of betrayal. Her modeling work with global brands from Louis Vuitton to Victoria’s Secret makes her more visible than other athletes.

“She gets a lot of attention because of that, because there is always that focus on femininity and appearance for female athletes,” says Robert Hayashi, a professor at Amherst College who specializes in Asian American history and sports studies.

That fascination is evident from the gross tonnage of social media commentary she attracts in both countries.

A recent Instagram post showing her on the medal stand following her gold medal-winning performance in the Big Air competition garnered 402,000 likes and 51,000 comments. And China’s Twitter-like Sina Weibo said its servers were briefly overloaded with adoration for the champion following her win from her.

But there can be a dark side. Critics in China have chided Gu for failing to use her platform to advocate for internet freedom in a country that tightly restricts access for its citizens. On Tuesday, she largely dodged a reporter’s question about whether she compromised by choosing China, saying she uses her voice as much as she can.

And of course pundits in the US have attacked her for competing for China, often in terms that further the persistent, racist othering of Asian Americans.

“Right now Eileen is a hot commodity in China, and just treated as ‘Chinese’ by the media and many of her fans,” says Rui Ma, founder of the San Francisco-based investment consulting firm Tech Buzz, who immigrated from China to the US as a child in 1989.

“We’ll see if her stance … will be fully accepted there over the long run,” she says. “It certainly doesn’t seem to be accepted by many Americans at the moment.”

Gu also represents how dramatically migration from China to America has changed.

“The profile of the Chinese population here is qualitatively different from many other immigrant groups,” says Jeanne Batalova, senior policy analyst at the Migration Policy Institute in Washington, DC “They’re highly educated, they work in in-demand jobs and many come with substantial amounts of finances that they invest here.”

While many continue to move to the US for low-wage jobs, they’re increasingly being outpaced by migrants with flexibility and the money to spend summers in China and maintain regular contact with family at home.

They are more likely to be bicultural, openly embracing their heritage unlike earlier generations who were told — and believed — that integration was their ticket to acceptance.

“There are benefits to being Chinese and engaging with China, the country and the culture,” Ma says.

Scott Kennedy, senior adviser and expert on China at the Center for Strategic & International Studies in Washington, DC, says Gu’s story shows that the complexities of the globalized world don’t always line up neatly with geopolitical lenses.

“Her story speaks to the benefits, the value, the opportunities that come from an interconnected world,” he says. “Her gold medal may be placed in China’s column. But her success is a global success.