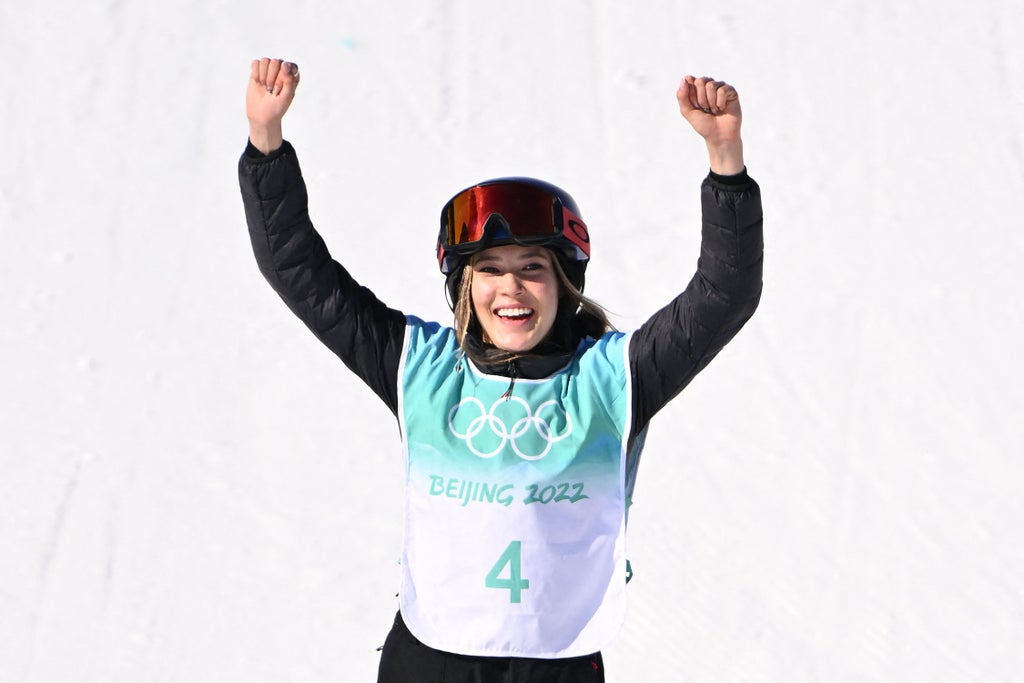 Eileen Gu is already the face of Vogue, Victoria’s Secret, Louis Vuitton and Tiffany but now she’s the face of these Olympics too – with medal bling to rival those luxury brands.

But the luster of gold can be quickly tarnished and within seconds of her victory in the women’s freestyle Big Air, Gu was being labeled a traitor and human rights abuse enabler. She is just 18.

Dubbed the snowprincess, it’s hard to escape Gu, even in the hermetically sealed bubble of the Games. If you could walk down the streets here, you’d see her face splashed across billboards and magazine covers. She was the lead, second and third item on Chinese state television this morning.

Gu insists her decision to compete for China, rather than the United States, where she was born and raised and spends most of her time, was taken to ‘honor her heritage’.

But she’s found herself, just a teenager, pitched into the middle of seeing things geopolitical tensions well beyond her own valiant, if naive, attempts at ‘snow diplomacy’.

“Sport is way we can unite people, it doesn’t need to be about nationality, we are all out here together, pushing the human limits,” she said.

“I grew up spending 25 percent of my time in China, I’m fluent in Mandarin and English and culturally fluent in both countries. My mum grew up in Beijing and there is a real sense of coming home.

“I’m just as American as I am Chinese, both countries have made me the person that I am. Both countries have been so supportive of me, I’ve not taken advantage of one or the other. I’m about using sport as a force for unity and not using it as a decisive force. If you disagree with that, that’s your problem and I can’t help you.”

There are plenty of foreign imports in the China team here, former NHL players Jake Chelios and Jeremy Smith or figure skater Zhu Yi, who was widely criticized on Chinese social media website Weibo for her stuttering performance and even more stuttering Mandarin.

Gu – fiercely intelligent and mature beyond her years – rarely makes herself available for interviews, which made her 45-minute press conference absorbing, as she switched effortlessly between languages ​​and fixed that bright white million dollar/6.3m yuan smile at every inquisitor.

Indeed, as much as she produced a masterclass on the snow, winning gold with a trick never previously completed, her showdown with the press was arguably more impressive.

Awkward questions were dodged and word perfect soundbites were delivered while she used the moderator’s strict refusal to allow follow-up to deftly side-footed hot topics, all with the evasive skill of a ten-term politician.

It was a flawless performance, thanks to perhaps the most intense media training any athlete has ever gone through. You could almost hear the advice – ‘answer of your own terms’, ‘don’t accept the premise of a difficult question’ – coming through every sentence.

“I’m not trying to keep everyone happy, I’m an 18-year-old girl living my best life and having a great time,” she added.

“It doesn’t matter if other people are happy or not. I know that I’ve got a good heart, I know the reasons for making the decisions I do are for a greater common interest.

“If people don’t believe me, if they don’t share the same morals as me and I’m not going to waste my time placating them.

“If people don’t like me that’s their loss, they’ll never win the Olympics.”

Athletes competing under flags far from home is nothing new at the Games, look how Team GB lauded California-based Sky Brown, the skateboarding bronze medalist in Tokyo.

On Wednesday Charlotte Bankes, who has competed in the last two Games for France, goes in the snowboard cross as Britain’s hottest medal chance.

But this is China and it’s different.

And while you admired her skiing and marveled at her media skills, it was hard to listen to Gu talking about ‘inspiring young girls’ and only working with brands who believe in ‘positive social change’, while giving this answer on Peng Shuai, who was watching in the stands as a guest of International Olympic Committee president Thomas Bach.

“I’m grateful she is happy and healthy and out here doing her thing again,” she said, without knowing whether she was doing any of those three things.

“I’m happy to know she was here and it’s a big honor when more widely followed sports pay attention to free skiing and it gives us an amazing platform.”

From flying high, after landing a dizzying left double cork 1620 she’d never previously executed, to coming down to earth with a thud.

But Gu is relentless, she just bounces back up – and delivers another zinger, her answers too perfect to be anything but carefully scripted and rehearsed to the nearest syllable.

“That was the best moment of my life. The happiest moment, day, whatever — of my life. I just cannot believe what just happened,” she said.

“I challenged myself and tried something I’ve never done to get that gold. This is the Olympics, people from all around the world are watching, I’m not here to beat my opponents, I just want to become better than my previous self.

“I want to do things that I’ve ever done before, I want the world to see my spirit and want to inspire girls around the world to break their boundaries.”

Inspiring girls to ‘break boundaries’ and ‘show their spirit’ is a fine and noble sentiment but this is China. Peng Shuai, watching in the stands, can surely appreciate the irony, if only we could ask her.