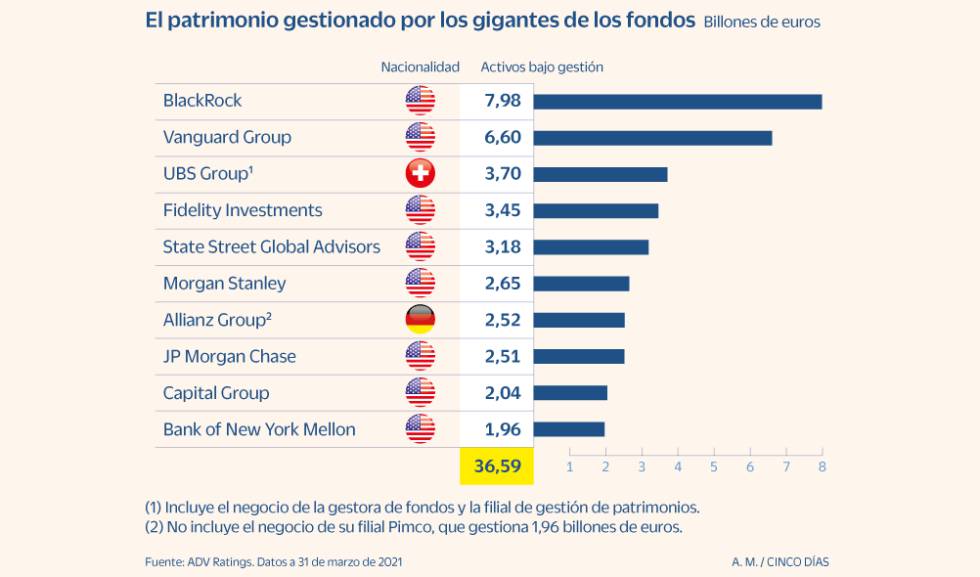 The United States dominates the asset management sector with an iron fist. Of the 10 largest firms in the sector, eight are from the United States. BlackRock, Vanguard, Fidelity … they are some of the greats in the industry. Only two European names slip into this select club, the German insurer Allianz and the Swiss bank UBS. Among the 10 largest companies, they manage assets worth 40.6 trillion dollars (36 trillion euros).

The largest fund manager on the planet is BlackRock (not to be confused with BlackStone, the venture capital fund). BlackRock was founded by Larry Fink in New York in 1988. The entity offers its services through its 85 offices, located in 35 countries, and manages investments worth nine billion dollars (7.98 billion euros).

The group is publicly traded and is valued at $ 914 billion and had attributable profit of $ 5.286 billion last year.

The business with which BlacRock has grown the most in recent years is the sale of investment funds that replicate the evolution of indices (index funds), under the brand iShares. This type of product allows you to invest with very cheap commissions. It is the world’s largest provider of exchange-traded funds (ETFs) with more than 400 products and more than two trillion dollars of assets under management.

The second largest group in the asset management sector is Vanguard, which specializes exclusively in index funds (both conventional funds and exchange-traded funds). The firm manages 7.5 billion dollars (6.6 billion euros). Its corporate structure is completely different from BlackRock’s.

Vanguard is not publicly traded. Its founder, John Bogle, wanted from the beginning to create a management company that would reduce the investment cost as much as possible (hence his commitment to index funds) to make these services as universal as possible. The owners of the company are their own funds so, indirectly, they are the participants of the funds the owners of Vanguard.

The firm believes that in this way conflicts of interest are avoided between owners who would like to grow even at the cost of harming small investors. The entity barely has advertising expenses and its management structure is much lighter than that of other firms.

The asset management podium is occupied by the great global giant of private banking, the Swiss bank UBS, with 3.7 trillion euros of assets under management. In this case, the figure includes both its mutual fund business and the money it manages from its clients’ portfolios through discretionary management contracts. It also has an important corporate banking business (advising large companies on debt issues, mergers and acquisitions …) and a retail banking business in Switzerland.

The other European company that appears among the big ones is the German insurer Allianz, with 2.52 trillion euros of assets under management (7th position). The Washington-based entity owns the fund manager Pimco (based in California, United States, and specialized in fixed income). If the business of its subsidiary is added, Allianz would occupy the third position, with 6.2 billion euros, very close to Vanguard.

The rest of the staff is made up entirely of other fund managers in the United States. What Fidelity Investments, a publicly traded company owned by the Johnson family. If the US company is added to the business from other countries (Fidelity International, an independent firm), the group would be close to four billion euros.

Parents are most proud of their child’s ability to be compassionate, display kindness, and go above and beyond to help and support a friend