Skip to content
Home News Eight communities will celebrate without restrictions: this will be the second COVID New Year’s Eve | Society 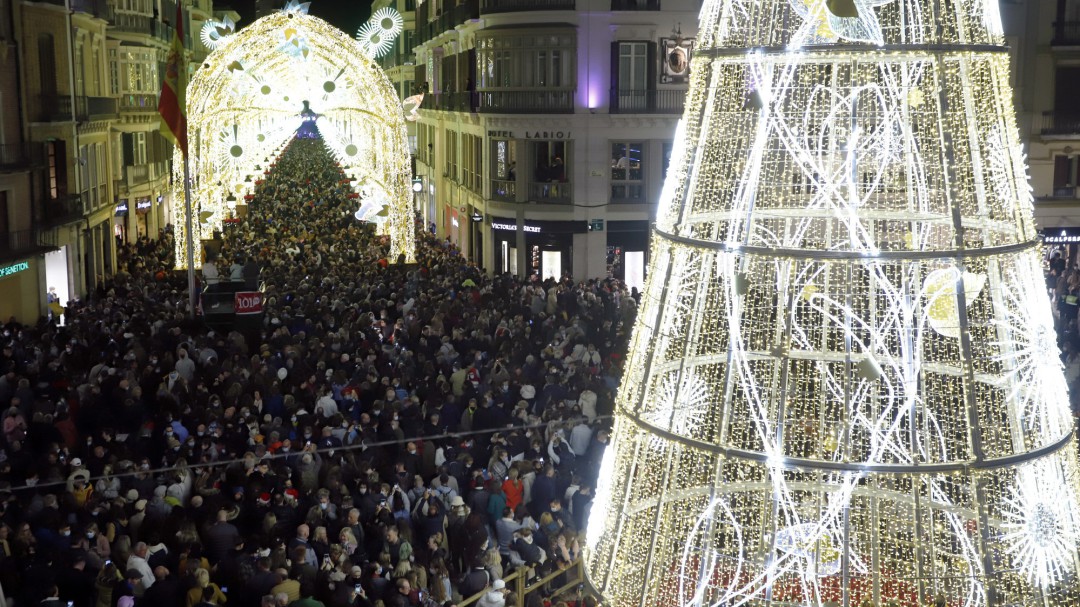 Eight communities will celebrate the second COVID New Year’s Eve without restrictions, while the rest will do so with limited hours and capacity, mobility and nightlife, in an attempt to curb the tsunami of infections of the omicron variant in the middle of the sixth wave of the coronavirus.

Spain, where the obligation to wear the mask outdoors has been reestablished, added this Thursday, for the tenth consecutive day, a new record of infections with a total of 161,688.

This has raised the cumulative incidence to 1,775 cases per 100,000 inhabitants in 14 days, although there are already 7 autonomies that far exceed it, with more than 2,000.

Despite this, each community faces this New Year’s Eve unevenly, except for the 6 in the north of Spain that agreed on their own restrictions on schedules, capacity and nightlife until the end of the Christmas festivities. The only common denominator is the mandatory use of the mask outdoors.

Nightlife closures, curfews to avoid mobility between 1 and 6 in the morning, time limitations and reduced capacity in the hotel business or the obligation to present the covid passport to access the establishments are some of the measures adopted to prevent the spread of the virus.

You will not be able to celebrate New Year’s Eve in Asturias, where nightlife is closed, nor in Cantabria, which has limited it until midnight, but neither in other autonomous regions such as Catalonia, Murcia, La Rioja, Navarra or the Basque Country, in which only night activity is allowed until 1 in the morning.

Galicia opens nightlife until 2 in the morning, except this night that is allowed until 3, but the Galician Executive has asked that it close until January 3, in exchange for financial aid and with the purpose of putting an end to the transmission of the virus. Tonight meetings of non-cohabitants are prohibited from 3 to 6 in the morning. Also Aragon, as an exceptional measure, will allow it tonight until 2 in the morning.

The Canary Islands have no limitations for the remainder of the Christmas holidays after the justice rejected the night curfew that the regional government had requested, understanding that it represented “an important restriction of personal freedom.”

On the contrary, the governments of Madrid, Andalusia, the Balearic Islands, Extremadura, Castilla León, Castilla-La Mancha and the Valencian Community have chosen to maintain normality and not implement limitations for this New Year’s Eve, at least for now, until they end the Christmas holidays, that yes appealing to the responsibility of the citizens.

Proof of this normality is that the public returns to the Puerta del Sol in Madrid to follow the chimes, after it was empty last year, although with less capacity than usual. Specifically, 7,000 people will be able to access the square as long as they wear a mask and maintain a safe distance.

What will not be celebrated are the five macro-parties that were planned in Madrid, since they have been prohibited for not having a contingency plan against the coronavirus. Festivities have also been suspended in other cities and the itineraries of the parades have been reduced or modified, as in Granada.

Despite the confusion caused by the end of 2021 with the imposition of bans in most communities, Spaniards do not lose hope that the pandemic will end next year, as some experts predict, after complying with not very good grade all these measurements.

This is the map of restrictions by autonomous communities for this New Year’s Eve:

In Andalusia, the committee of experts that evaluates the epidemiological situation will meet on January 4, so no new restrictions are planned until then.

However, the Granada City Council has suspended the New Year’s Eve party in the Plaza del Carmen and will modify the route of the Three Kings Parade to avoid concentrations.

A maximum of 10 people per table is allowed, and they must be one and a half meters apart, and bar consumption is eliminated.

In Asturias the interior of the cocktail bars, discos, dance halls and nightlife venues will remain closed until January 28.

In the Balearic Islands, it has not imposed restrictions but it does require the covid certificate in all restaurants and in all cultural spaces in order to guarantee that the spaces are safe.

In Menorca, the most representative restaurants on the island have been closed.

The Canary Islands do not have limitations for the remainder of the Christmas holidays after the justice did not authorize the night curfew that the regional government had requested, understanding that it implied “an important restriction of personal freedom.”

Cantabria has limited the hours in hospitality and nightlife from 00.00 am due to the explosion of infections registered in the region.

Fifty of the 102 municipalities are at a high level (3) of risk for contagion of covid-19, including all those with more than 5,000 inhabitants, and therefore it is not allowed to open nightlife and the hotel industry will have a capacity of 75 per percent of its capacity.

The Government of Castilla La Mancha does not consider implementing new restrictions if there is not a radical change in the coronavirus data in the coming days.

The Government of Castilla y León has not imposed additional restrictions, such as reducing capacity or closing nightlife, to stop the sixth wave of covid-19, although it has recommended self-control and limit family and social gatherings.

In Catalonia the curfew is maintained between 1 and 6 in the morning, the closure of nightclubs and the limitation of capacity inside restaurants that must not exceed 50 percent, measures that have the endorsement of justice.

Meetings must have a maximum of ten people, both in the public and private spheres.

The Valencian Government trusts in the self-protection of the population, so it has not imposed restrictions for tonight. Two extraordinary parties are authorized in València and Castelló and there is a request for another 27 cotillions and parties that do not require authorization because they do not require stages or exceed the allowed capacity.

Extremadura is at level 2 of health alert, so its Government does not consider approving new restrictions, since it understands that the situation in hospitals is under control.

In Galicia there is what they have called a ‘touch of no curfew’ on the street between 2 and 6 in the morning. The hotel business closes at 12 and nightlife, generally at 2 in the morning, except this night when it opens until 3.

Nightlife venues can benefit from financial aid articulated by the Xunta if they close until January 3, but a police device will monitor that they really have no activity.

The Superior Court of Xustiza de Galicia (TSXG) has also authorized that meetings between non-cohabitants, in public and private spaces, between three and six in the morning are prohibited.

The Community of Madrid has not imposed restrictions, neither of hours nor of capacity in the hotel industry, despite the increase in infections. However, he has not authorized any of the macro parties that had requested permission for this New Year’s Eve in the capital. Nightlife venues that have a valid activity license – that is, they do not need a special permit – will be able to function normally.

In the capital, the street terraces have been extended until January 31, in order to help bars and restaurants recover after the closures that were decreed at the beginning due to the pandemic.

Murcia maintains until January 14 the closure of non-essential activity at one in the morning, such as nightlife, the limitation of the number of diners per table.

It has also reduced the capacity of nightlife to 30% and the requirement of the covid certificate in these places. Dance floors cannot be used.

Navarra has imposed the closure of bars and nightclubs at 1 a.m., as well as the extension of the COVID certificate to residences, hotels or gyms, measures that will be in force until January 14.

Consumption in the hospitality industry should be done at tables of a maximum of ten people.

In La Rioja all hospitality establishments, nightclubs, discotheques, gastronomic societies and private premises are closed as lowers from 1 to 6, a measure will be in force until January 24.

The requirement of the covid passport has also been extended to more public places, such as game rooms, multifunctional spaces, hotels, gyms and closed sports facilities.

In the Basque Country, the hotel industry and commercial, cultural and leisure activities may be open until 1 a.m. until January 28, which is why the end of the year festivities have been suspended.

In addition to establishing the closing hours, a general capacity of 60% is set in the premises, with groups of 10 people maximum, and the prohibition of consumption in bars is recovered.

In Ceuta, it has not introduced restrictions for New Year’s Eve or Three Kings, but the COVID certificate is necessary to access health centers, residences and hospitality and nightlife establishments.

In this city, one of the main New Year’s Eve parties has been suspended due to the increase in infections, which already exceed 1,000 cases per 100,000 inhabitants.

In Melilla, the covid passport is mandatory to access closed spaces, including hotel establishments and to visit hospitals and prisons, and residences for the elderly, a measure that will be in force until January 15.