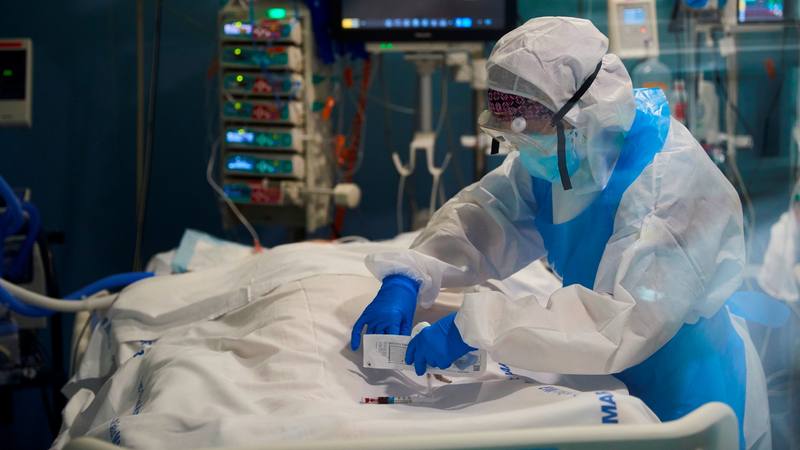 The rapid rise in infections so far in December has made the health situation due to COVID-19 worrying again, and it is also a week before Christmas Eve. With 80% of the Spanish population vaccinated with a complete schedule and an increasing administration of booster doses, the main indicator of the level of risk in this phase of the pandemic is the pressure on care in hospitals.

And this one is already worrying: Eight autonomous communities, in addition to Ceuta, are at a high risk level, with an occupation that exceeds 15% of COVID patients in intensive care units (ICU). And one of them, CAtalonia is at the highest risk level, with an occupancy that already exceeds 25% of the available beds, before the Christmas celebrations contribute to increase the transmission of infections and the presence of serious pictures.

At the national level, ICU occupancy stands at 13.9%, compared to 13.4% the day before. There are 1,292 seriously ill patients, 47 more than the day before. On the same day last year, the number of ICU patients was considerably higher, a total of 1,964. There are nine provinces with an ICU occupancy above 25%, three of them Catalan (Girona, Lleida and Tarragona) and three in Castilla y León (Palencia, León and Ávila), in addition to Gipuzkoa, Huesca and Castellón.

The worst situation is in Catalonia, at very high risk. Another eight territories are at a high risk level (over 15% occupancy of ICU beds by patients with coronavirus), and two of them the Basque Country (22.5%) and Navarra (20.3%), exceed 20% of patients with coronavirus in intensive units. The other regions at high risk are Castilla y León, Comunidad Valenciana, Aragón, Baleares, Cantabria and La Rioja.

Another five territories are at a medium risk level (more than 10% of patients with coronavirus in intensive care). To date, the best situation is in Extremadura, which with eight patients in the ICU (4.2% occupancy) is in a situation of controlled circulation, while Andalusia (5.9%), Galicia (6.3%) and Murcia (9.3%) are at low risk level.

Regarding the general level of hospital occupancy, counting common income in the plant, Extremadura is also the only risk-free region. Six territories (Andalusia, Castilla-La Mancha, Galicia, Madrid, La Rioja and Ceuta) are at a low risk level and the remaining 12 are at a medium risk level for this indicator. There are 5,390 patients in the plant throughout the country, which represents 5.3% occupancy. On the same day last year, the occupancy was double: 11,346 people (9.41%).

But occupancy, as seen in the charts, is rising rapidly. A month ago, ICU occupancy was nine points lower (4.68% on November 16, according to Health reports). And the difference from last year is that healthcare pressure grows with 80% of the vaccinated population. Despite the expansion of the omicron variant, which is proving to be more contagious than the delta, Health data shows that most of the admissions, both from ICUs and those in the ward, correspond to unvaccinated people.

Four communities are already worse than in the fifth wave

But there is communities that today exceed occupancy levels in ICU from last summer’s wave, as is the case of Basque Country, the Valencian Community, Asturias and Murcia. La Rioja, which a few days ago was the community with the greatest care pressure in intensive care, has also gone through a worse situation than in the summer, although now it is improving.

Others such as Castilla y León, Castilla-La Mancha and Galicia are approaching the maximum of the summer wave, like the previous regions, they are all still far from the general occupancy rate of a year ago, when it had not yet started. vaccination.

And also, outbreaks and quarantines among health personnel

In addition to contagions in the population, the care pressure in hospitals increases due to the large outbreaks that are taking place in groups of health workers this month, which are beginning to be common in different work environments, but which have a greater resonance in the case of health groups.

On Thursday, the hospitals of Santiago de Compostela, Soria and Alcorcón (Madrid) They have joined this Thursday the list of health centers that have detected outbreaks among their professionals, in most cases as a result of social contacts or meetings outside of work. Likewise, at the Nurse Isabel Zendal hospital in Madrid, dedicated to caring for coronavirus patients, 17 health workers are infected after celebrating a Christmas meal.

See also  Subirats will replace Castells as Minister of Universities

Days ago, other outbreaks were reported in Leganes, also in the Community of Madrid (32 positives and 80 professionals in quarantine at the Severo Ochoa Hospital), and in Málaga, in whose Regional Hospital cases were known among patients from the Neurosurgery plant, in the same center where the first major outbreak in this wave was registered at the beginning of the month, which affected 96 professionals after a Christmas meal. There have also been outbreaks in Basurto hospitals (Bilbao) and San Eloy (Barakaldo).

Catalonia is once again the community in the worst hospital situation at this point in the sixth wave of the pandemic. In this community, the rapid worsening of the situation raises fears that in the coming holidays there will be as many admitted to the ICU as in last Christmas, although with a much lower mortality thanks to vaccination. All the epidemic data have worsened considerably again in the last 24 hours, with more than 4,100 new infections every day, a speed of spread that is increasing and a risk of regrowth (EPG) that has already exceeded the third wave, is close to that of the second and is following the rhythm of the fifth.

Although mortality is also growing, with 70 deaths in the last 7 days, they are much less than the 281 that were counted in the week of December 17, 2020, at the beginning of the third wave.

But if on December 16, 2020 there were 343 hospitalized with coronavirus in the ICUs of Catalan hospitals, according to data from the Ministry of Health there are 320 today. By provinces, Girona is the one in the worst situation in the whole country, with 37 people in the ICU, according to Health data, almost 54% occupancy. In Lleida occupancy is 35% (it is the third worst in all of Spain, after Huesca), in Tarragona it is 27% and in Barcelona it is 22%.

Epidemiologists and doctors have warned that, if they do not take restrictive measures now, in January they will again have to stop carrying out scheduled operations because the admissions of critically ill patients will occupy the beds of critics.

At previous levels of care, the situation has also worsened very quickly. Primary care centers treated 28,749 COVID patients on Thursday, almost 3,000 more than on Thursday last week, a pressure on outpatient clinics that continues to increase and that was not registered since the end of July, while in the days before Christmas last year there were about 23,000 daily visits.

For this reason, the Department of Health of the Generalitat is rushing to adopt new measures and the minister, Josep Maria Argimon, has announced that since Monday the close contacts of people who are diagnosed with covid will have to be confined for 10 days even if they are vaccinated. All to prevent the expansion of the omicron variant from causing further havoc. Ómicron already accounts for 20% of the cases in the community and 25% in the Barcelona area, and the authorities believe that in three weeks it will be the dominant one in Catalonia, displacing the delta variant.

Protests from the nurses’ collective

At a time when the increase in infections, booster vaccinations and children from 5 to 11 years old and, in addition, the flu campaign coincide in the primary care centers, the unions are sounding the alarm. Specifically, the Nursing Union (Satse) denounces that the “lousy” organization of public health by the Community of Madrid and the “lack of nurses” in health centers has caused “a new healthcare crisis”, due to that nurses should prioritize performing PCR while the rest of the patients “will have to wait, at least, until January”, unless it is a “vital emergency”, according to a statement.

On the other hand, the State Platform for School Nurses has also indicated that vaccination against COVID-19 for minors between 5 and 11 years old would be “more agile, efficient and would entail fewer inconveniences for mothers and fathers” if there were already a school nurse in all Spanish educational centers, and they regret that the administration of the vaccine has not been generalized in educational centers, which they consider to have many advantages both for minors and for their families.