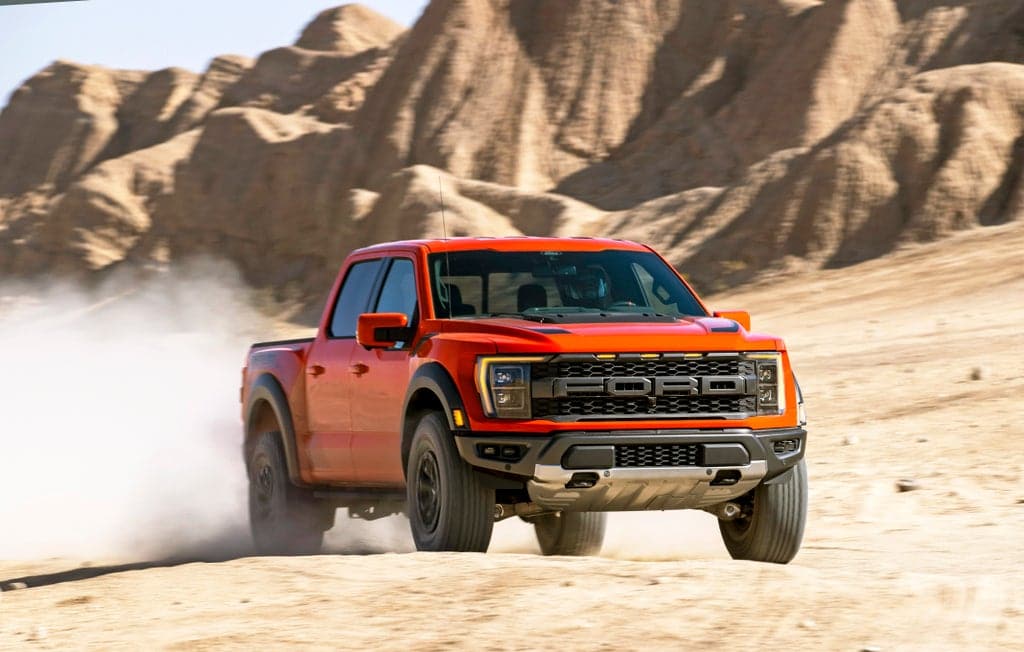 We’re living in a golden age of off-road pickup trucks that you can buy straight from the factory, and the Ford F-150 Raptor and Ram 1500 TRX are the most high-profile examples. They’re similar in many respects and offer full-size truck utility combined with exceptional high-speed desert-running performance. But there are some differences that make each performance pickup unique. Which truck is the best buy? Edmunds’ experts break down the pros and cons of each to find out.

The F-150 Raptor comes with a turbocharged V6 that generates an imminently respectable 450 horsepower and 510 lb-ft of torque. But those numbers look almost quaint compared to what the Ram 1500 TRX is capable of. Its supercharged 6.2-liter V8 cranks out an incomparable 702 horsepower and 650 lb-ft of torque. By normal performance truck standards, the Raptor’s engine produces a healthy amount of power, but it simply cannot touch the TRX’s output.

To get a sense of just how much more potent the TRX is, you need only look at the two trucks’ acceleration numbers. In Edmunds’ testing, the Raptor sprinted from 0 to 60 mph in a quick 5.8 seconds, but the TRX reached 60 mph more than a second quicker at 4.2 seconds. The TRX also sounds a lot cooler when you hammer the gas.

Both the TRX and Raptor are wide and have relatively long wheelbases, and that can make them feel claustrophobic on narrow, boulder-strewn paths. These trucks are best suited for wide expanses of desert where they can stretch out their legs and put their massive power and specialized hardware to use.

See also  Scotland's obesity crisis won't be solved by forcing restaurants to display calories on menus. Here's what to do instead – Stephen Jardine

There are slight differences in how each truck feels when you’re driving them off-road, but ultimately not enough to make a difference either way. They’re both exceptional.

The combination of large tires with thick sidewalls and a softly sprung off-road suspension results in a smooth ride for both the Raptor and TRX. One downside, however, is those cushy all-terrain tires tend to be noisy and droning on the highway. The Ram is spacious, though its seats could use a bit more cushioning for off-road use. The Raptor manages to feel roomy despite being slightly smaller than the TRX.

Both interiors will impress with their luxurious appointments and sporty accents, but the Raptor has a slight edge over the TRX when it comes to tech. The TRX comes standard with Ram’s vertically oriented 12-inch touchscreen. It looks great, and the interface is responsive and easy to use. But the Raptor’s 12-inch touchscreen, which is laid out horizontally, is just a little bit better. The graphics are crisp and clear, and its Apple CarPlay and Android Auto smartphone integration schemes connect to your phone wirelessly. The Raptor also has a fully digital 12-inch instrument cluster, which looks sharp and complements the center touchscreen nicely.

The TRX is easily the most powerful production off-road truck ever made, but if you want those bragging rights, it’s going to cost you. Starting at more than $78,000, the 2022 Ram TRX is roughly $8,300 more than a 2022 F-150 Raptor. Is the Ram’s extra 252 horsepower worth it? For some, it might be, but the Raptor’s turbo V6 should be more than enough for everyday driving while providing high-speed thrills on the occasional off-road adventure.

With such a big gap in power, it should come as no surprise that the Raptor gets better fuel economy than the TRX. At an EPA-estimated 15 mpg in combined city/highway driving, the Ford is no fuel miser, but it’ll save you more at the pump than the Ram with its 12 mpg combined thirst.

EDMUNDS SAYS: Both trucks are a ton and a half of fun. But with the Raptor, you get a similar capability for significantly less money. And if you need a ridiculously powerful truck in your life, wait until Ford’s V8-powered Raptor R arrives for the 2023 model year.