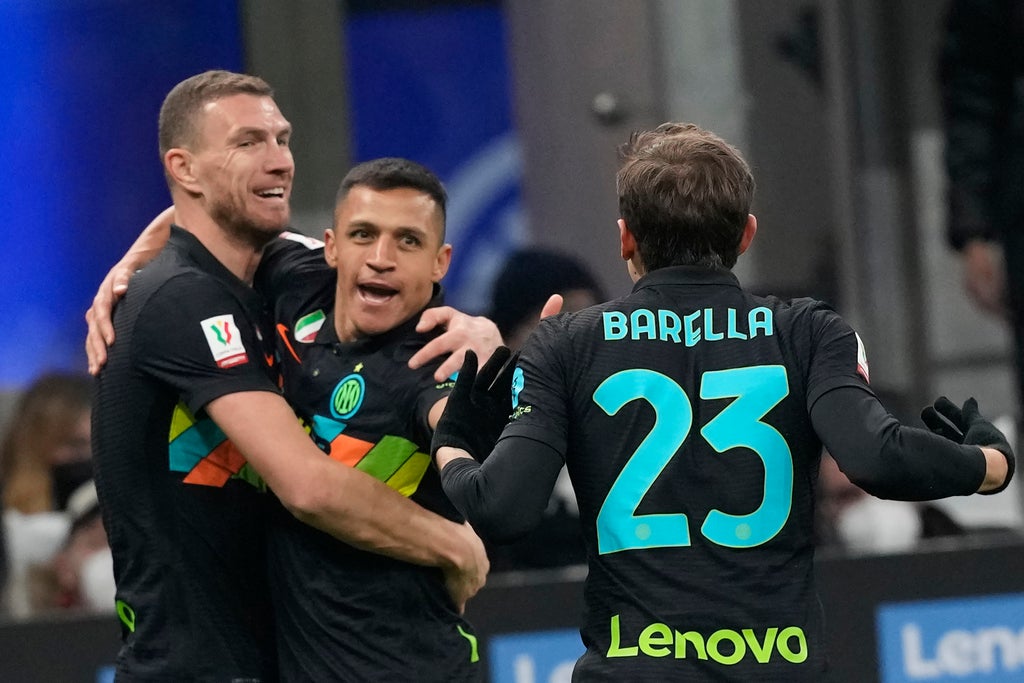 Edin Dzeko equalized as Inter Milan came from behind to snatch a 1-1 draw at title rivals Napoli and retain top spot in Serie A.

On an intriguing day in which the German and Spanish leaders also dropped points, second-placed Napoli had threatened to hit the Italian summit when Lorenzo Insigne netted an early penalty at the Diego Armando Maradona Stadium.

Piotr Zielinski also hit the post for the hosts but champions Inter, who went into the game with a one-point lead, ensured their advantage would be maintained as Dzeko leveled after 47 minutes.

There could be a further twist to come, however, with the result meaning third-placed AC Milan can now go top if they beat Sampdoria on Sunday.

Venezia moved out of the relegation zone by holding on for a 2-1 win at Torino despite the late sending off of David Okereke. Ridgeciano Haps and Domen Crnigoj scored their goals as they came from behind after Josip Brekalo’s early opener.

In Germany, Bundesliga pace-setters Bayern Munich shipped four goals in the first half as they slumped to a shock 4-2 defeat at mid-table Bochum.

The champions looked on course to open up a 12-point lead at the top when Robert Lewandowski fired them ahead after just nine minutes at the Vonovia Ruhrstadion.

But Christopher Antwi-Adjei leveled soon after and the game swung dramatically in the hosts’ favor as they added three more in the seven minutes before the break.

Jurgen Locadia got the first of them from the penalty spot before Cristian Gamboa and Gerrit Holtmann also struck in a blistering spell. The prolific Lewandowski pulled one back after 75 minutes and later hit the woodwork but Bochum held on.

Second-placed Borussia Dortmund will have the chance to cut the gap to six points when they travel to Union Berlin on Sunday. Bayer Leverkusen, in third, were convincing 4-2 winners over Stuttgart.

At the opposite end of the table, bottom side Greuther Fuerth claimed just their third win of the season as they beat Hertha Berlin 2-1 with a double from Branimir Hrgota.

There was also an interesting result at the top of LaLiga as leaders Real Madrid were held to a goalless draw at Villarreal.

The Spanish giants were hoping to restore a six-point advantage over Sevilla – who beat Elche on Friday – but found the Yellow Submarine tough to break down.

Gareth Bale, making his first appearance for the club since August, had one of their better chances when he hit the bar in the second half but Arnaut Danjuma also struck the woodwork for the hosts.

Mario Hermoso scored a last-minute winner as 10-man champions Atletico Madrid claimed a dramatic 4-3 win over Getafe. Atleti had led 2-0 but trailed 3-2 before the break after two Enes Unal penalties and an effort from Borja Mayoral for Getafe.

But Angel Correa’s second of the game leveled matters and Atleti went on to win despite Felipe’s dismissal.

Cadiz and Celta Vigo played out a goalless draw while Osasuna won 3-0 at Rayo Vallecano.

French champions Lille won 1-0 at Montpellier to climb above their hosts in Ligue 1 and boost their European hopes. Xeka claimed their winner 13 minutes from time while Lyon beat Nice 2-0.