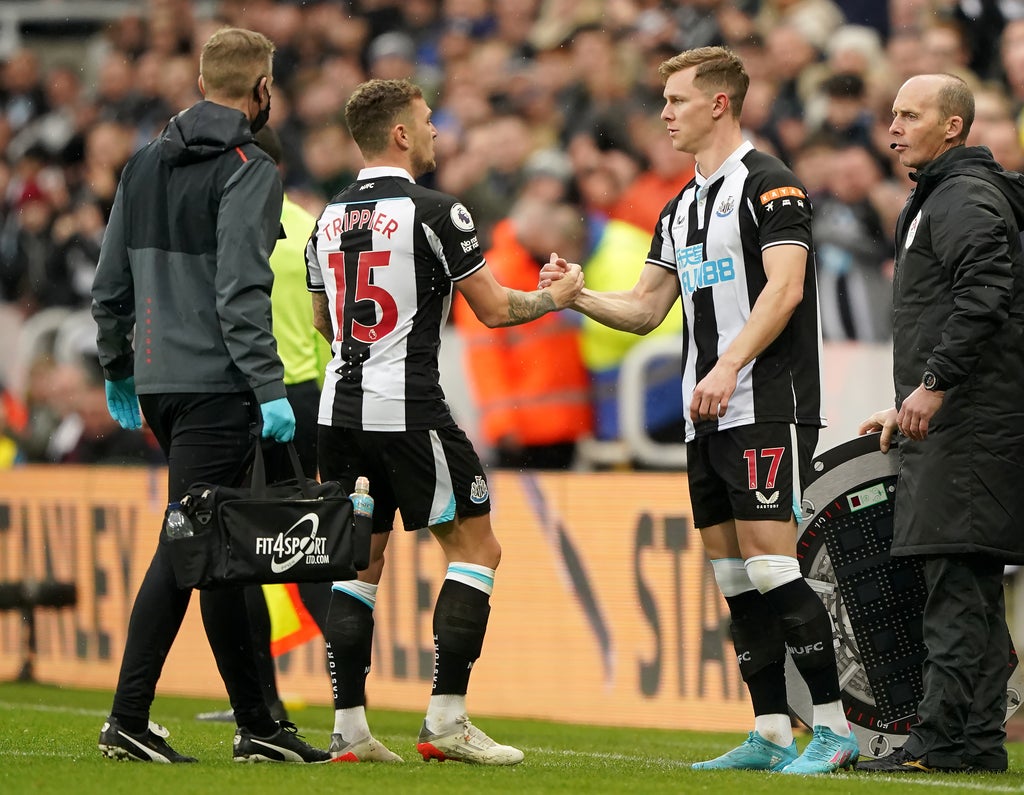 The £12million January signing scored the decisive goal in a 1-0 victory at St James’ Park 10 minutes before half-time, but left the pitch in some discomfort within three minutes of the restart.

Head coach Howe said: “Trippier got stamped on and he couldn’t continue with a problem on the top of his foot, so he’s gone for an X-ray at the hospital.

“We’re keeping everything crossed hoping that there’s no broken bone.”

Trippier’s goal was his second in six days for his new club having been handed the captain’s armband in the absence of Jamaal Lascelles – who was unwell – and Howe, the club’s supporters and England boss Gareth Southgate will be hoping for good news.

While his premature departure was cause for concern on Tyneside, Trippier’s strike handed the Magpies – who saw £13million man Dan Burn make an impressive debut – a third successive league win for the first time since November 2018 and took their points tally from their last five outings to 11, one more than they managed from their first 18 matches of the campaign.

Howe, whose side are now four points clear of the the relegation zone, said: “It shows we’re in a good place at the moment.

“We’ve worked incredibly hard. In the last three games, I don’t think there’s been any secret to how we’ve won the games.

“I don’t think they’ve been fluent footballing performances where we’ve played from back to front and all the things that we potentially want to do in the future but it’s been very disciplined, hard-working, a lot of energy, a lot of team-work, team spirit, togetherness that have made the difference for us.

“So big compliments for everyone for that because that’s sometimes the hardest thing to deliver consistently.

“For the last three games, we’ve certainly had that.”

Trippier blasted a free-kick through the defensive wall after referee Craig Pawson had been advised by VAR to change his decision to award a penalty for Calum Chambers’ challenge on Joe Willock, which took place inches outside the box.

However the Magpies, who also lost Trippier’s fellow starting full-back Javier Manquillo to injury, were grateful for the technology 16 minutes into the second half when Ollie Watkins saw what would have been an equalizer ruled out for offside as Villa staged a determined fightback.

“Sometimes you perform to a level where you make your own luck, but our level was nowhere near today, so we got what we deserved from this game.

“I’ve got no complaints with the outcome. I might have been different if that would have gone in our favour, but we’d be clutching at straws if we were pointing fingers towards VAR.

“I don’t think Newcastle have had to play ever so well to beat us – that’s a big frustration as well.”