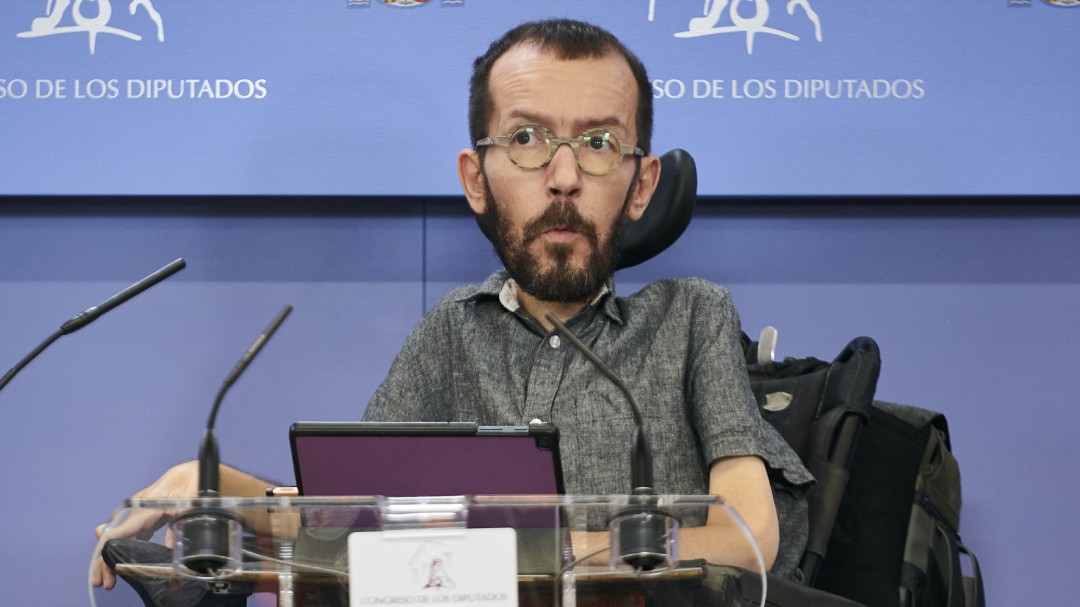 The Table of Congress has rejected this Tuesday the request of United We Can that two Vox deputies be sanctioned, whom it accuses of boycotting last week an act organized by the confederal group, in which they played the anthems of the Police and the civil Guard. The refusal to take action in the face of this sabotage has led the United We Can spokesperson, Pablo Echenique, to accuse the president of Congress, Meritxell Batet, of “protecting the extreme right.”

The act boycotted by Vox was a round table to support the young people of Zaragoza convicted of an attack on authority, in the incidents that occurred in 2019 after a demonstration against a rally of the training directed by Santiago Abascal.

Specifically, United We can propose that sanctions be imposed on the deputies of Vox Manuel Mariscal and Luis Gestoso, but their socialist partners have not supported the request. The spokesman for the Socialist Group, Héctor Gómez, has refused to comment on the deliberations of the Table on this matter.

But, at a press conference, Echenique pointed directly to Batet. As he explained, after speaking with Gómez on Tuesday he was left with the feeling that the PSOE was “receptive” to his sanction proposal and it was the president who had “led” the decision not to take any action.

A message of “impunity” is sent to the extreme right

“It is hard to say, but it has sided with Vox, it has protected the extreme right and has not fulfilled what should be its main function: to protect the dignity of the Chamber,” Echenique denounced, for those who feel this way a “very dangerous precedent”. “A message of impunity is sent to the extreme right and surely we will see how they will go further,” he warned, warning that perhaps the next sabotage will be suffered by the PSOE.

According to parliamentary sources have informed Europa Press, Batet has taken the floor at the meeting of the Table to expressly censure attitudes like that of Vox and demand a commitment from the members of the Table that they will not be repeated.

The president has stressed that it is “inadmissible” to interrupt events organized by groups in the parliamentary area and that actions that involve “interference” in events taking place in the Chamber cannot be allowed. In this context, he has asked the members of the Bureau to ensure mutual respect and also towards institutional decisions, and all of them have pledged to act accordingly.

Specifically, according to United We Can, the Vox deputies should have been sanctioned in application of Article 106 of the Congress Regulations for having violated the “dignity” of the institution in an “unprecedented” act. This article provides that the deputies who promote serious disorders can be suspended for one month by the Presidency.

Vox warned of a possible crime of prevarication

During the meeting of the Board of Congress on Tuesday, the fourth vice president and deputy of Vox, Ignacio Gil Lázaro, has dismissed as “idle” the request for sanction of United We can since, in his opinion, his action has no place in the Regulation of the House.

Furthermore, he has come to warn that approving any type of measure along the lines that United We can demand would be to adopt an “unfair decision knowingly”, that is, that his colleagues at the table would commit prevarication if they came to estimate the ” chusca unfounded claim “of the confederal group.