Paige Smith and her housemate Zack were stuck in Majorca after easyJet canceled their flight back to Manchester Airport and the replacement was hit with a series of delays, meaning they missed their graduation party

Paige Smith and her housemate Zack were stranded for two days (

Two British pals were left stranded abroad for days and missed a graduation party after their easyJet flight was cancelled.

Paige Smith and her housemate Zack jetted off from Manchester Airport for a short break in Palma, Majorca, on March 28.

Staffing shortages and a surge in international travelers have put UK airports in disarray this month, and the pair were surprised when they breezed through without any hitches for their outgoing flight.

But their return home was a little more challenging, reports the Manchester Evening News.

Paige awoke last Friday morning to begin packing her bags ready for the flight home – only to receive an email from the budget airline advising her the flight was cancelled.

Stuck 1,300 miles from home, she and Zack frantically tried to find out what had happened.

Uncollected bags strewn around the reclaim hall in Terminal 3
(

They were told they would be given a hotel room for the night and they could catch the next available flight.

But it meant them missing their long-awaited graduation party with friends and Paige had to let down work clients.

The 21-year-old said easyJet had sent her the cancellation email at 4am, hours before they were due to fly.

She explained: “We had rushed around that morning and were about to leave to go to the airport when, luckily, I checked my emails.

“Off the bat, we didn’t know what to do, and I was meant to be at the work on Saturday too.”

The airport has put the chaos down to staffing issues
(

Paige and Zack were told the next flight was at 9.15pm the following day.

But Paige said the airline’s mobile app showed the flight “kept being pushed back” due to various delays.

The flight eventually took off in the early hours of Sunday.

The airline has been forced to cancel multiple flights from Manchester this week, which it put down to “ongoing high levels of crew sickness”.

On the weekend Paige and Zack were stranded, the airline had axed more than 200 flights across the UK. 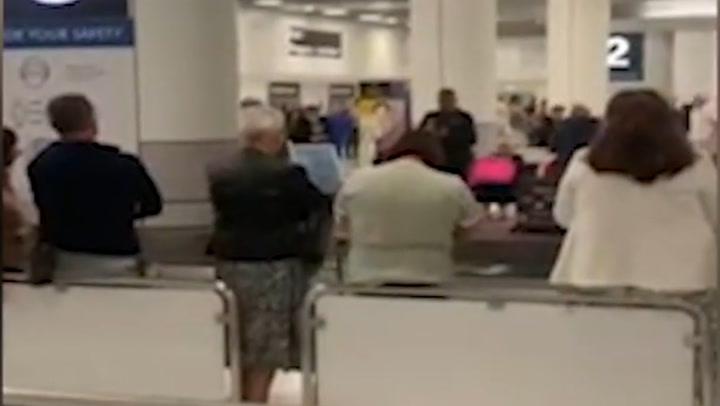 The friends only had hand luggage so weren’t met with any further waiting around once back in Manchester, with Paige describing the airport as a “ghost town”.

“There were people sleeping everywhere, it was so strange,” she added.

“We couldn’t believe how many suitcases had just been abandoned, there were hundreds of them.”

An easyJet spokesperson confirmed high levels of staff absences due to sickness resulted in the initial cancellation and the further delays were due to air traffic control restrictions.

They apologized to Paige and said the company did “all possible to minimize the impact of the disruption” for customers, while providing the option of a free transfer on an alternative flight, or a voucher or refund, as well as hotel accommodation and meals.

Referring to the delay, which meant the flight arrived in Manchester several hours late, they added: “While this was outside of our control we’re very sorry for the inconvenience caused by the subsequent delay.”

See also  Boy, 11, is first boxer with cystic fibrosis to fight in a licensed match