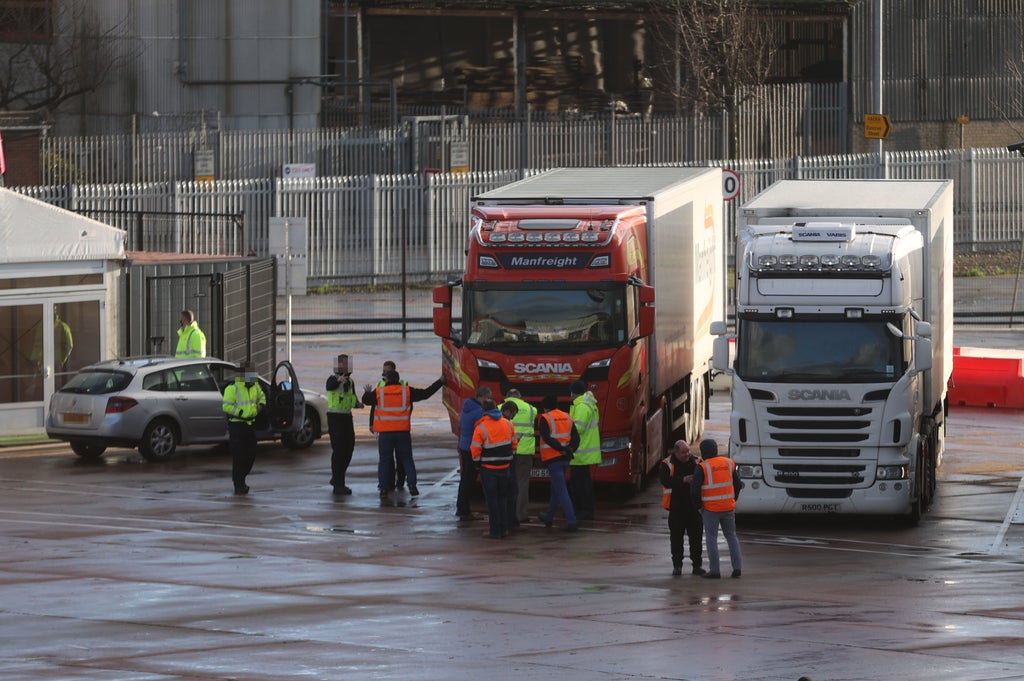 A DUP Stormont minister will act unilaterally to stop Brexit checks at Northern Ireland ports, the Stormont premier has said.

Paul Givan said his party colleague Edwin Poots will order a halt to the controversial checks after a failed attempt to secure broader approval from the Stormont Executive to continue with them.

The anticipated move by the agriculture minister has been branded a stunt by other parts of the executive, who insist Poots does not have the authority to avoid the checks required under the terms of the Brexit Withdrawal Agreement, an international treaty.

Sinn Fein Deputy Prime Minister Michelle O’Neill, who claimed the proposal would expose the DUP to “public ridicule”, said public officials would be obliged to defy any order from Mr Poots as such a direction would be illegal.

However, Mr. Givan offered a very different interpretation, arguing that Mr. Poots no longer has the legal cover to continue the agri-food controls, which are currently being carried out by staff from his department.

He said that public officials will be legally bound to follow an instruction from the minister.

The dispute centers on whether Poots requires the authority of the Stormont Executive at large to carry out the checks and inspections of goods arriving from Britain that are required by the Northern Ireland Protocol to Brexit.

Stating that recent court rulings have made it clear that such authority is required, Mr Poots sought to secure Executive approval by requesting that it be voted on at Thursday’s meeting.

He did so knowing that if the matter was raised to the Executive, his party could then exercise a veto to block the approval of the checks.

Realizing this, Sinn Fein used its own veto to prevent the issue from being put on the agenda in the first place.

Mr. Poots now maintains that, in the absence of broader executive support, he does not have the legal authority to continue the controls.

It is unclear when he will formally announce that he has ordered them to be detained.

Givan told reporters in Stormont that his colleague will act.

“I think it is a mistake on the part of Sinn Fein not to have allowed the Executive because for these controls to continue, the Executive must agree, so we believe that continuing with the controls would be illegal,” he said.

“That requires Edwin Poots as a minister to act in a way that solves that problem, and Edwin Poots is going to act.

“The fact that it is not on the agenda does not change the legal parameters by which Edwin Poots as a minister has to fulfill his duties and will be taking action.

Givan said that civil servants would be obliged to follow any instructions from the minister.

“I think not doing that would have profound implications in terms of how the civil service operates.”

Sinn Fein has argued that the Executive already made a decision in 2020 that Mr Poots’ Department of Agriculture, Environment and Rural Affairs (Daera) would take legal responsibility for carrying out the checks.

The party has now pointed to a response Mr Poots gave to an SDLP MLA in late 2020 which it claims confirms that position.

In September 2020, before the checks came into force, SDLP MLA Patsy McGlone asked Mr Poots what legal advice he had sought in the event that he did not make the preparations required by the Brexit Withdrawal Agreement to carry out the checks.

In his response, Mr Poots said that his department had a responsibility to carry out food safety checks and that it was required by UK domestic law to fulfill that duty.

Responding to the apparent contrast between his position in 2020 and his position now, Poots said Thursday: “Several recent rulings that were previously unavailable have provided considerable clarity on the legality of the issue.”

Ms O’Neill dismissed the DUP claims on Thursday. She characterized it as an electoral campaign before the Assembly vote scheduled for May.

“Edwin Poots himself has made it clear in the Assembly room that he has a legal responsibility to administer controls at ports. That is still the case today,” he said.

“There is also a very clear executive policy that it is the Daera department, his department, that should administer those controls, so he is the responsible minister.

“Instead of election campaigns and political stunts, you should keep doing your job.

“That is why I have made that point very clear. This is about the elections, folks, this is what the DUP is into, it’s more tricks in a long list of tricks in the last few months on this subject.”

Ms. O’Neill said that the Executive has very clear legal advice from the Attorney General on the subject.

She said public officials have to fulfill the department’s legal obligations under the withdrawal treaty, regardless of what Mr. Poots orders.

If the checks were stopped, the UK government would be at odds with its obligations under the terms of the Brexit Withdrawal Agreement.

In such circumstances, the Government could use its authority to order controls to resume.

However, that could put him in a politically awkward position, given that Foreign Secretary Liz Truss is currently engaged in intense negotiations with Brussels in a bid to significantly reduce the number of checks required by the protocol.