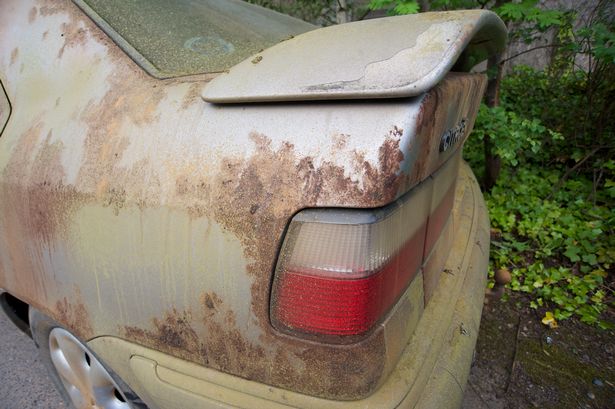 Abandoned cars are a problem in north Livingston with 23 abandoned over the course of three months recently.

Many are just being dumped rather than properly disposed of, showing a lack of awareness of the law.

The problem became clear at the recent local area committee.

Councillor Alison Adamson raised the issue, highlighting a burnt out car left in a public car park for weeks before being moved. Giving a quarterly report on the work of the NETs team which deals with cleaner streets, officer David Lees revealed that many drivers were not aware that they could not leave cars on public roads once Statutory Off Road Notices (SORN) had been issued.

The cleaner streets enforcement team had recorded 23 abandoned vehicles in the ward between October and December last year and 26 for the same period the year before.

He told Livingston North local area committee: “The abandoned vehicles are taking up quite a bit of time, as is fly-tipping. There are only four members of the enforcement team for the whole of West Lothian.”

People can go online, or call the council to report abandoned vehicles.

“We attend them all,” he told the meeting.

“We put stickers on the windows to attract the attention of the owners. We have some that come to us and say the car has been SORN’d, but they don’t realize that the vehicle has to be moved to private ground rather than left on council ground.”

He said in other cases where the vehicles were not insured or road taxed they would have official notices warning that the vehicle would be removed.

He added: “At lot of the time when we do that the vehicle gets moved and taken away. There are others where we have to get them uplifted.”

She highlighted the burnt out carcass of a car left in a car park behind a community center in Deans.

She said: “I had been chasing to find out why it was still there. It looked absolutely shocking. The council were aware and the police were aware but I was advised the owner was responsible for taking the vehicle away through his insurance from him. It sat there for two to three weeks. I assumed fixed penalties would work with that.”

In the Deans case all the council could do would be to speak to the owner.

He said: “It is their property. They would have to arrange it with their insurance.

“We would not be able to touch it but we could communicate with the owner. I would have expected it to be uplifted sooner than two to three weeks.”

Councilor Andrew Miller questioned the pressure on resources with only four enforcement officers covering the county. Part of their remit is also to educate against littering and fly-tipping.

Jim Jack, head of operational services, suggested it was about people changing their attitudes towards littering. He praised the efforts of the litter picker volunteers and highlighted the sense of frustration they must face at having to return to the same stretches every week to pick up after it had been re-littered.

I have added: “It is a real problem but resource is only part of the issue. If we get quicker at cleaning it up, does it stop the people dropping it?”

He said it was frustrating, having worked at this for 30 years adding that people need to take more social responsibility for their behaviour.