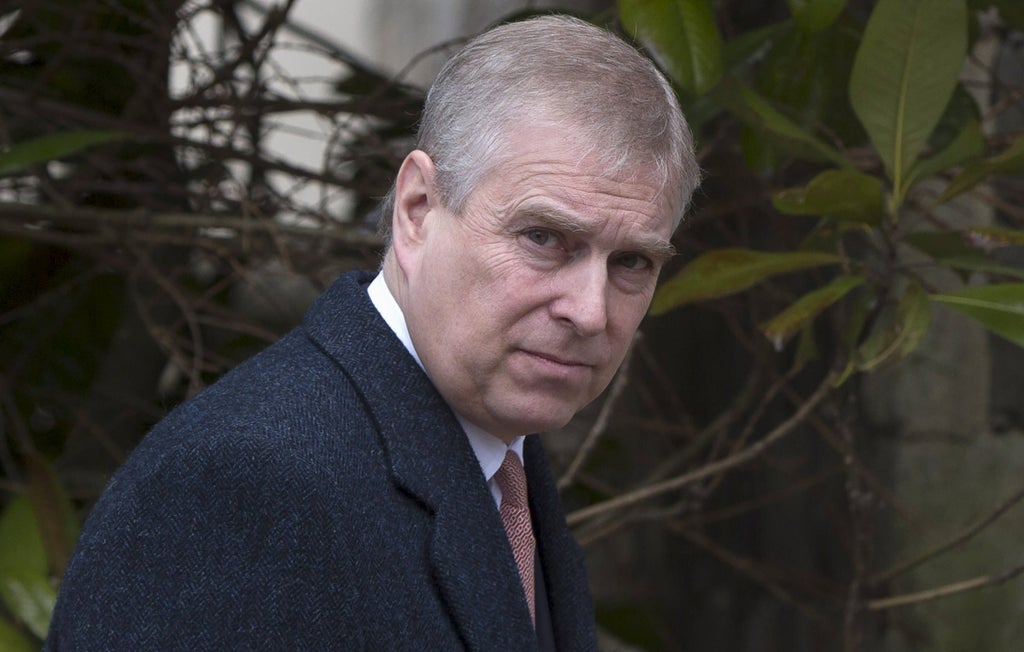 The Duke of York is facing calls to confirm he will fund the multimillion-pound cost of his civil sex case settlement and not the public or royal family.

Andrew will have to pay a legal bill of up to £12 million, according to speculation, following his out-of-court agreement with Virginia Giuffre who was suing the Queen’s son for sexual abuse after she claims she was trafficked by his friend and convicted sex offender Jeffery Epstein.

The scandal, which has left Andrew’s reputation in tatters, risks further damaging the monarchy if the perception remains that he has escaped any financial obligations, lawyer Mark Stephens has suggested.

The duke had said he wanted a jury trial to contest the allegations in court but – probably after pressure from the royal family – he opted to reach a settlement with Ms Giuffre and now “regrets his association” with disgraced financier Epstein, a letter submitted to the United States District Court stated.

Andrew agreed to make a “substantial donation” to his accuser’s charity after the pair came to the undisclosed out-of-court settlement.

Mr Stephens, an international reputation lawyer from the firm Howard Kennedy, said the duke will have to give details of where the settlement money is from or risk more “reputational damage” to the monarchy.

He said: “There’s absolute uproar on social media and mainstream media with people mistakenly thinking this money has come from taxpayers’ money or the civil list.

“And I think there’s equal concern that it comes from the royal family and what they want to see is that Andrew is paying out of his own pocket – that he’s personally being financially punished here.

“And I think he’s going to have to clarify within the next 24 to 48 hours from his team, that it’s come from his own private resources or will do.”

The lawyer’s words mirrored the thoughts of royal finances expert and author David McClure who said there is “enormous public interest” in the sum and the source of the funding being disclosed.

Mr McClure added: “I really think for once the royal family should come clean and say where the money came from.”

Although the parties have settled the case, the agreement is not an admission of guilt from the duke and he has always strenuously denied the allegations against him.

No detail has been disclosed with regard to the settlement and costs, but it has been reported the duke has agreed to pay around £10 million to Ms Giuffre and a further £2 million to her charity, with speculation the Queen might help with costs from her private funds.

Andrew is reportedly in the process of selling his Swiss ski chalet with the property expected to generate many millions in funds.

The public, and not a jury, will now decide “who they believe” after the settlement which ended the prospect of an autumn trial in the civil case, said Gloria Allred, a US lawyer who represented several of Epstein’s victims.

Speaking to BBC Radio 4’s Today programme, Ms Allred said: “This case will be dismissed, then each will go their own way and he will never end up testifying under oath, at least not this case, and the public will just have to decide who they believe.”

Ms Giuffre made a claim against Andrew for damages in her home country of the US, claiming she was trafficked by Epstein to have sex with the royal when she was 17, a minor under US law.

The settlement agreement states that Andrew will donate to Ms Giuffre’s charity in support of victims’ rights and that he has pledged to “demonstrate his regret for his association with Epstein” by supporting the “fight against the evils of sex trafficking, and by supporting its victims”.

Last month the Queen stripped Andrew of his remaining patronages and honorary military roles as the monarchy distanced itself from the duke ahead of potentially damaging developments in his lawsuit.

Labor Party leader Sir Keir Starmer said the settlement had ended “a sorry chapter” but it was important not to lose sight of sexual abuse victims.

He said: “Whatever the rights and wrongs of this settlement – ​​and it does seem to end a sorry chapter – I think it’s very important we don’t lose sight, don’t lose focus, on the victims of sexual abuse.”