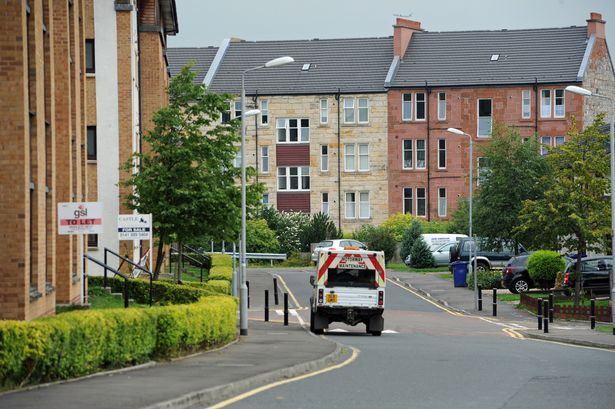 A drunk Paisley grandfather downed a bottle of whiskey before shouting “f**k the IRA” to police officers.

First-time offender John Docherty had drank to excess and turned into a foul-mouthed granddad when police turned up at his home.

Docherty, 53, who stood in the dock at Paisley Sheriff Court wearing a Saltire face mask attempted to headbutt a police officer – but was too drunk to make contact, and stated “English c***s.”

Sheriff Brian Mohan told Docherty he was too old to start a criminal career and slammed the comments he made to cops.

Procurator fiscal depute Amber Feeney told the court: “Around 10pm, police were actioned to attend the accused’s property in Saucel Crescent after receiving a report of a disturbance.

“Police were allowed entry by the accused’s partner and they entered the living room.

“Docherty immediately became verbally aggressive and shouted ‘F**k off’ and then stood up and shouted, ‘You, ya English b*****d’ to a police officer.

“The accused then lunged at PC Boyle in an attempt to headbutt him but due to his intoxicated state the officer avoided the blow and the accused was taken to the prone position.

“Docherty continued to shout and rant about football and the IRA.

See also  Emmett Till: The United States Permanently Closes the Case of the Brutal Murder of a Black Teen in 1955 | International

“He was taken to Greenock police station but due to his continued hostility and aggression he was not formally cautioned and charged.”

Defense agent Mr Sievewright told the court the behavior on March 8 last year was “out of character” for the father of “grown-up children” and that he was “pathologically not homophobic or sectarian.”

Mr Sievewright added: “This was caused by a state of intoxication. He had drank to excess on this day as he had bought a bottle of whiskey.

“He was so intoxicated that he was very little recollection.

“Mr Docherty has no previous convictions and is genuinely ashamed of his behavior to the police officers.

“He accepts this is a serious offense and at 53 years of age he now has a criminal conviction after making very unsavory remarks.”

Docherty, of Saucel Crescent, admitted he made remarks to police officers at his offensive home address on March 8 last year which where aggravated by sexual orientation and religious prejudice, and were racially aggravated.

He also admitted he attempted to headbutt PC Kieran Boyle by lunging at him.

On sentencing, Sheriff Brian Mohan said: “You are a bit old to be beginning a criminal career in your 50s.

“That itself tells me it was out of character.

“The behavior was completely out of control.

“Police officers in their duty do not deserve to be insulted or assaulted.”