Skip to content
Home News Dozens of deaths from the impact of several tornadoes in the United States. 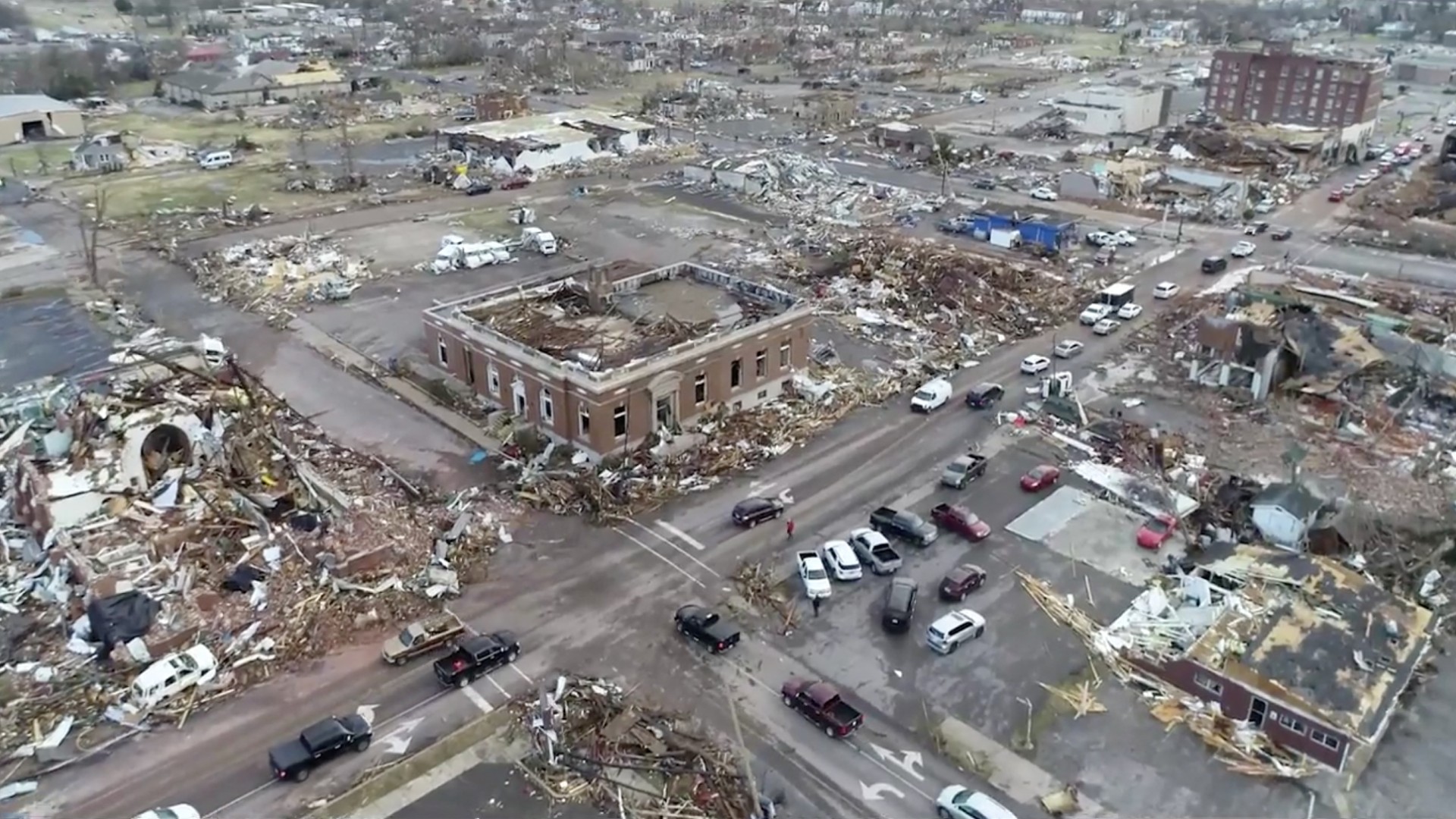 The most intense series of tornadoes in memory has hit this Saturday six states of the United States and has left dozens of deaths and a undetermined number of missings, as well as a trail of devastation that has washed away entire populations and caused countless damage.

The storm, which started on Friday night, has hit hard Arkansas, Illinois, Kentucky, Missouri, Mississippi Y Tennessee and, according to the National Weather Service (NWS), there have been reports of 37 tornadoes in different states.

The US network CNN has considered it likely that the fatalities are at least 84 throughout the country, according to different reports from the authorities.

Attention has focused on the Mayfield town (Kentucky).

The images that the media have shown show this town completely devastated, with the vast majority of its buildings destroyed.

Among the victims, six employees of an Amazon warehouse

Among Mayfield’s search operations is that of employees of a candle factory municipality, in which 110 people worked at the time of the tornado, and of which they have been rescued at least forty.

There is still a dance of figures on the number of figures, however, in statements collected by WPSD Local 6, Bob Ferguson, spokesman for Mayfield Consumer Products, has indicated that 8 people have died and that 93 of the 100 people who were working in the factory at the time of the collapse are located and safe, while Beshear had indicated that only 40 had survived.

These statements contrast with those of the state governor, Andy Beshear, who during a press conference this Sunday afternoon, reiterated that there are only 40 people located, so there were about 70 missing.

The search for survivors is also continuing in a warehouse of the e-commerce giant Amazon in Edwardsville, Illinois, where deaths have risen to six as a result of the damage caused by the storm. Authorities in Illinois have noted that 45 people They have managed to leave the building and that one more has been transferred by air to a hospital to be treated.

In addition, a person has lost his life in a nursing home in Monette, Arkansas. In that same state, in Jackson County, another fatality has been known.

In Tennessee, the deaths in Lake County have risen to at least four, one in Obion and one in Shelby.

Two other deaths have been confirmed in Missouri – a woman in St Charles County and a child in Pemiscot – while eleven more people have been taken to hospitals.

The scale of the tragedy, especially in Kentucky, has been exposed this Saturday.

The governor of the state, Andy Beshear, has said he is “fairly certain” that at least 70 people have lost their lives, although he has acknowledged that the death toll can exceed a hundred.

Beshear has described the storm as the more “devastating and deadly” in Kentucky history, which he has explained was ravaged by four different tornadoes.

Mayfield, which is home to about 10,000 people, has become the face of the devastation caused by tornadoes, with most of its buildings razed, as well as vehicles and debris scattered in different areas.

The mayor of Mayfield, Kathy Stewart O’Nan, has assured the CBS chain that the water supply in that town has been compromised and that there are areas that do not have electricity. Power outages have affected hundreds of thousands of people in various states.

On the other hand, near Hopkins County, Kentucky, a train derailed and their wagons reached a home, with no reported deaths or injuries.

US President Joe Biden approved this Saturday the declaration of emergency in Kentucky to accelerate the disbursement of aid through the Federal Emergency Management Agency (FEMA).

Biden, who has described what happened in principle as an “unimaginable tragedy”, has promised in a speech from his city, Willmington (Delaware), that your government will do “whatever it takes” to support the storm-stricken states and “will find a way to provide it.”

“It is a tragedy. And we still do not know how many lives were lost or the full extent of the damage,” he lamented.

The Democratic leader has talked to the governors of the most affected states to express their condolences for the lives lost and for the damage caused in their territories, according to a statement from the White House.

Friday’s storm may go down in history, since the most destructive tornado – it is being investigated if it was a series of tornadoes – traveled “more than 250 miles across multiple states (including Arkansas, Missouri, Tennessee and Kentucky), “according to the NWS.

If it is confirmed that it was a “four-state tornado”, it would mark the longer trajectory for such a phenomenon in American history.

In March 1925, a “tri-state” tornado tore through Missouri, southern Illinois, and southwestern Indiana, leaving some 695 dead and 2,027 injured after traveling 219 miles.

And as if that weren’t enough, the forecasts for the next few hours are not encouraging. The Storm Prediction Center has warned of the risk of severe thunderstorms in various areas of Ohio, Tennessee, and other areas of the Southeast.