Skip to content
Home News Don’t mess with the queen: What to do if you see a swarm of bees this spring

The worker bee might be the emblem for the city of Manchester, but many would panic if they came across one in the street. However, a swarm of bees poses little danger if you know what to do.

According to the Royal Society for the Protection of Birds (RSPB), you can see honey bees from spring until late autumn, which usually means from April to October.

You might come across a swarm of honey bees lodged in trees, in chimneys, on roofs, wall spaces, on the floor and even on cars.

She describes herself as a ‘gentle beekeeper’ because selling honey is not her only motivation for keeping bees – she has a genuine passion for looking after the winged insects. She has become a swarm remover for people in Oldham, Rochdale and surrounding areas.

Sue told the MEN: “W hen you see swarms of bees attacking people in a film, that will not happen in real life. Because a swarm of bees is sworn to defend the queen bee, who is in the middle of that swarm. All they’re interested in is protecting their queen. You could walk past the swarm, you could stand and watch them, or sit underneath them, and they would completely ignore you.

“Remember, worker bees are sworn to protect their queen. And if you disturb them with a stick and if the queen bee moves out, then the worker bees would be frenzied and they would sting you.”

Explaining the science behind why bees swarm, Sue continued: ” What happens sometimes is that the queen bee may be aging. She may be failing. “And the bees detect this- their number one drive is the protection of the colony. So some of the bees scout for a new possible place to live in, and as soon as the queen leaves, the bees surround her in this ball.

“And because she can’t fly very far, she may land on a wall, in a tree or on a car or wherever. And the bees will not harm you at all.

“So that’s when I come along in my suit and with my box. I scrape the bees into the box and as long as I have got the queen bee into the box, the other bees will follow in.

“Swarming is completely natural for a bee colony. Inside a beehive, you have a queen, and maybe 20 to 30 male bees, along with thousands of worker bees.

“The worker bee only lives for about six weeks. The worker bees do all the work and they literally burn themselves out. As they are dying, the queen is constantly laying eggs, which emerge 30 days later as new worker bees.

“So it’s a complete circle of life.”

When Sue was asked to remove a swarm of bees from a tree branch by a car wash business in Heywood, the customer posted a TikTok video of Sue arriving with her bee suit and carefully dealing with the swarm. 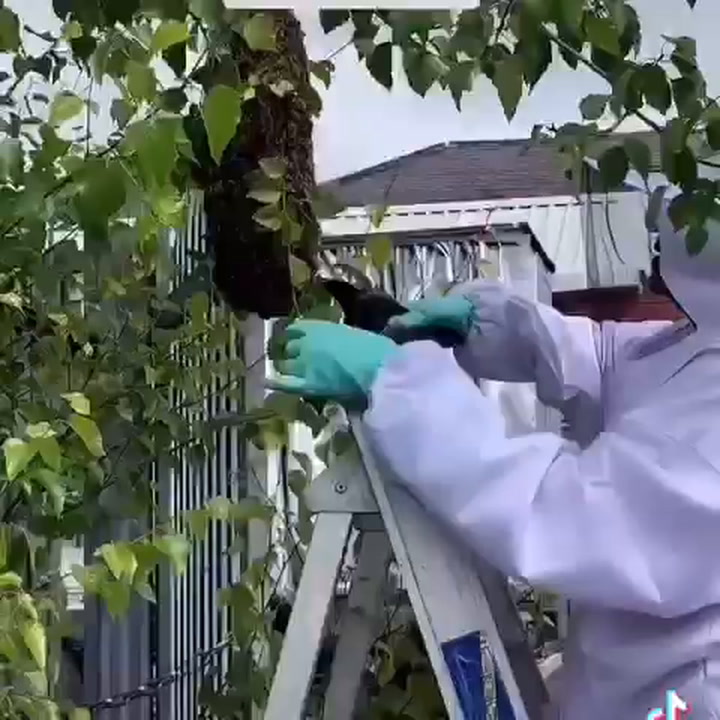 Greater Manchester was buzzing with swarms of bees last year. In May 2021, a swarm of bees settled on two cars in a street in Leigh, leaving residents stunned and some frightened.

The following month, a huge swarm of bees descended onto a BMW car parked outside an office block on St James Square near Deansgate. Later that week, another swarm of bees were spotted on a sign on Peter Street near St Peter’s Square.

The swarm was one of the biggest that Manchester City Council’s pest control team had ever collected.

Similarly, in Wigan, a massive swarm of bees took over a business park last summer, which was described by office workers as “a scene out of a horror film”.

Most honey bee swarms are not aggressive, but people are asked to stay away from them as a precaution.

What to do if you see a swarm of bees

READMORE:The bees are back in town… yet another swarm spotted at popular Manchester city center drinking spot