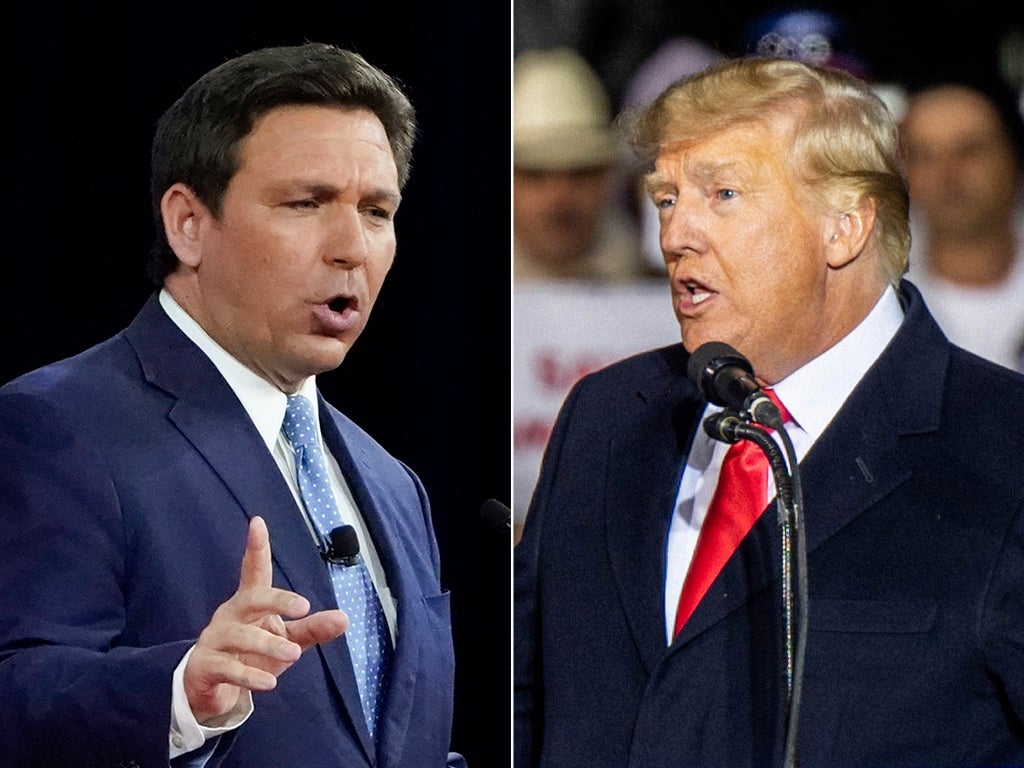 It should have been a coming-out party for Ron DeSantis.

The largest conservative activist gathering in the country is currently taking place in his home state of Florida, where he is governor. The Conservative Political Action Conference, a carnival of right-wing agitprop, has traditionally been used to test the strength of politicians among grassroots activists and to launch rising stars, and few have risen so fast as Mr DeSantis in the last few years.

And yet when Mr DeSantis took to the stage on Thursday in Orlando, he did so before all the participants had arrived, and before the main event had begun. Rows and rows of chairs lay empty on one side of the room.

How could it be that a man who is seen as a potential successor to Donald Trump as leader of the Republican Party ends up with such poor billing? The answer lies in the question.

The rivalry between Trump and DeSantis is simmering under the surface at CPAC this year. Even before the event had begun, there were rumors that Trump had a hand in DeSantis’ timeslot snub, perhaps by pressing the organizers.

There are reasons for Trump to pay close attention to what happens here. CPAC is a crucial event for conservatives to take the temperature on favored candidates. A straw poll of attendees taken each year can boost or sink a politician, and this year’s will be watched for signs that Trump’s lead over DeSantis (who polled second last year) is narrowing.

At stake in this feud between two Florida frenemies is the future of the Republican Party, and the country. The question that looms over it all: Is the party ready to contemplate a post-Trump order?

Wearing a sparkling DeSantis pin on her dress, Palm Beach resident Patricia DeBlasis was on her way to hear DeSantis speak when she stopped to sing his praises.

“He’s only 42-years-old but he’s got the mind and wisdom of someone much older,” she said. “I have kept us safe during the pandemic. He’s done all the right things. We didn’t have to wear masks, we didn’t have to get vaccinated.”

Ms DeBlasis said conservatives have been impressed by the way DeSantis has governed in Florida.

“I feel like our governments have gotten to be our nanny. We are bright people and we know what to do,” she added.

“I don’t think he’ll run for president this time. But it would be great to have him as vice president,” she said.

When he took to the stage on Thursday lunchtime, to loud cheers from the CPAC crowd, DeSantis ran through his greatest hits of Fox News appearances since last year.

Speaking at a speed that suggested a time slot much smaller than his ambition, he welcomed the crowd to “the freest state in these United States,” and painted a doom-laden picture of the country in 2022.

He spoke of masses of Americans “fleeing leftist governments” to Florida from across the country and declared that his state had “defeated Faucism,” a reference to a frequent target of his attacks, Dr Anthony Fauci.

“The woke is the new religion of the left,” he added.

DeSantis lacked the patter of Trump, but the speech was undoubtedly Trumpian, and filled with culture war references meant to delight the extremely-online attendees.

Curiously, he did not mention the former president once — a dramatic shift from the days when DeSantis described himself in campaign ads as a “pitbull Trump defender.”

Before Trump, DeSantis was a Yale and Harvard graduate, a former Navy lawyer and a run-of-the-mill right-wing congressman who was a member of the House Freedom Caucus. Following Trump’s victory in the 2016 presidential election he became one of his most vocal supporters of him.

While running for Florida governor in 2018 he drew attention for a fawning pitch to Trump supporters — in the video, he is seen reading Trump’s ‘Art of the Deal’ to his children and encouraging his children to “build the wall.”

As governor, DeSantis frequently touted policies that targeted the “radical left” and Black Lives Matter protesters, with whom he picked battles with every chance he got. He became a regular on Fox News, where he regurgitated conservative talking points on which ever culture war topic the channel decided to focus on that day.

DeSantis really shot to conservative stardom during the pandemic, when he used his position as governor of Florida to pitch himself as anti-lockdown and anti-vaccine mandate. He echoed Trump’s reluctance to impose restrictions to halt the course of the coronavirus, but went further by embracing vaccine hesitancy.

In public statements, DeSantis shied away from encouraging Florida residents to get the vaccine, and refused to answer whether he had received a booster shot. That prompted a veiled barb from Trump.

“I watched a couple politicians be interviewed and one of the questions was, ‘Did you get a booster?’ Because they had the vaccine and they’re answering like — in other words, the answer is ‘yes’ but they don’t want to say it, because they’re gutless,” Trump told OAN.

Trump has worked tirelessly to quash any hints of opposition to his status as head of the Republican Party since winning the presidency in 2016. And this strategy has largely worked: his grip on the GOP has been near absolute ever since.

But the numbers are shrinking ever so slowly, and his sideways attack against DeSantis was no doubt a reaction to the governor’s rising popularity.

The concern for Trump is that the wide gap he has enjoyed for years is narrowing. In January, at YouGov poll showed Trump polling at 46 per cent among Republicans compared to 21 per cent for DeSantis. Another polling firm, Echelon Insights, found that Trump’s lead over DeSantis in a two-way GOP primary match-up had shrunk from 40 points to 25 points in January this year.

And then there is CPAC. Every year, the CPAC straw poll is seen as an indication of the mood of right wing conservative activists in the US. Trump has held commanding leads for some years, but in the last two DeSantis has been firm second. The result of this year’s poll could give some indication of whether Trump’s grip is loosening.

Another question to watch on the ballot: How many people want Trump to run again, after his defeat in 2020. In February last year, 68 per cent answered in the affirmative, but a greater number, 95 per cent, said they wanted the Republican Party to advance his policies.

So does DeSantis, a Trump-clone for all intents and purposes, stand a chance of ushering out the former president?

Jacob Perry, a Florida-based Republican and former campaign consultant who has worked with Senator Marco Rubio, among others, is cautious on DeSantis’ chances on the national stage.

“The thing about DeSantis is he has everything people didn’t like about Trump but nothing that you did like,” he told The Independent. “Trump was brilliant on the stump. Not very smart, he constantly lied, but he is charismatic and he knew how to speak to crowds. DeSantis has none of that. He has less charisma than a rock, he’s a terrible public speaker, he’s a terrible retail politician. He just has the lies and the demagoguery.”

Playing a Trump-like character has served DeSantis well in Florida, he added, but it may not translate beyond his home state, he added.

“He’s gotten away with it in Florida because he hasn’t had a lot of opposition. On a national stage he’s gonna get exposed.”

Trump has only made small veiled attacks against DeSantis so far, but that would all change if he decided to run again in 202, Mr Perry said.

“Don’t ever get between Donald Trump and his ego. To him, he’s the greatest human being who has ever lived. He doesn’t understand why he’s not on Mount Rushmore. Donald Trump doesn’t do any of this for Republicans, or America, he does it all for Trump. The moment you get in the way, he’s gonna whack you.”