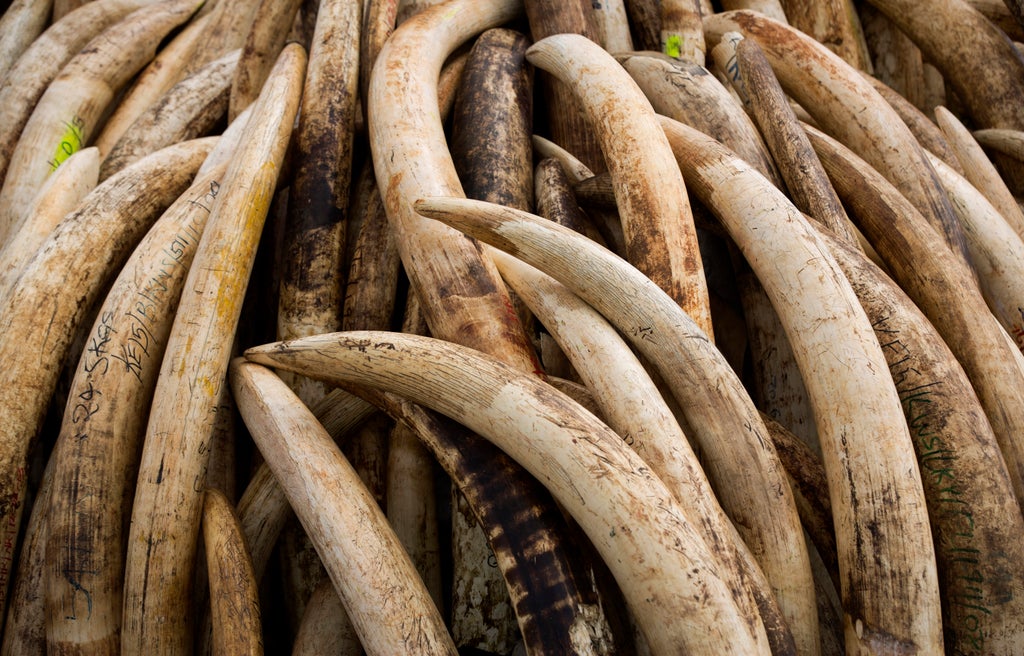 As few as three major criminal groups are responsible for smuggling the vast majority of elephant ivory tusks out of Africa, according to a new study.

Researchers used analysis of DNA from seized elephant tusks and evidence such as phone records, license plates, financial records and shipping documents to map trafficking operations across the continent and better understand who was behind the crimes. The study was published Monday in the journal Nature Human Behavior.

“When you have the genetic analysis and other data, you can finally begin to understand the illicit supply chain – that’s absolutely key to countering these networks,” said Louise Shelley, who researches illegal trade at George Mason University and was not involved in the research .

Conservation biologist Samuel Wasser, a study co-author, hopes the findings will help law enforcement officials target the leaders of these networks instead of low-level poachers who are easily replaced by criminal organizations.

“If you can stop the trade where the ivory is being consolidated and exported out of the country, those are really the key players,” said Wasser, who co-directs the Center for Environmental Forensic Science at the University of Washington.

Africa’s elephant population is fast drifting. From around 5 million elephants a century ago to 1.3 million in 1979, the total number of elephants in Africa is now estimated to be around 415,000.

A 1989 ban on international commercial ivory trade hasn’t stopped the decline. Each year, an estimated 1.1 million pounds (500 metric tons) of poached elephant tusks are shipped from Africa, mostly to Asia.

For the past two decades, Wasser has fixed on a few key questions: “Where is most of the ivory being poached, who is moving it, and how many people are they?”

He works with wildlife authorities in Kenya, Singapore, Hong Kong, Malaysia and elsewhere, who contact him after they intercept ivory shipments. He flies to the countries to take small samples of tusks to analyze the DNA. He has now amassed samples from the tusks of more than 4,300 elephants trafficked out of Africa between 1995 and today.

“That’s an amazing, remarkable data set,” said Princeton University biologist Robert Pringle, who was not involved in the study. With such data, “it becomes possible to spot connections and make strong inferences,” he said.

In 2004, Wasser demonstrated that DNA from elephant tusks and dung could be used to pinpoint their home location to within a few hundred miles. In 2018, I have recognized that finding identical DNA in tusks from two different ivory seizures meant they were harvested from the same animal – and likely trafficked by the same poaching network.

The new research expands that approach to identify DNA belonging to elephant parents and offspring, as well as siblings — and led to the discovery that only a very few criminal groups are behind most of the ivory trafficking in Africa.

Because female elephants remain in the same family group their whole life, and most males don’t travel too far from their family herd, the researchers hypothesize that tusks from close family members are likely to have been poached at the same time, or by the same operators.

Previously when an ivory shipment was intercepted, the one seizure would not allow authorities to identify the organization behind the crime, said Special Agent John Brown III of the Office of Homeland Security Investigations, who has worked on environmental crimes for 25 years.

But the scientists’ work identifying DNA links can “alert us to the connections between individual seizures,” said Brown, who is also a co-author. “This collaborative effort has definitely been the backbone of multiple multinational investigations that are still ongoing,” he said.

They identified several poaching hotspots, including regions of Tanzania, Kenya, Botswana, Gabon and Republic of Congo. Tusks are often moved to warehouses in another location to be combined with other contraband in shipping containers, then moved to ports. Current trafficking hubs exist in Kampala, Uganda; Mombasa, Kenya; and Lomé, Togo.

Two suspects were recently arrested as a result of one such investigation, said Wasser.

Traffickers that smuggle ivory also often move other contraband, the researchers found. A quarter of large seizures of pangolin scales – a heavily-poached anteater-like animal – are co-mingled with ivory, for instance.

“Confronting these networks is a great example of how genetics can be used for conservation purposes,” said Brian Arnold, a Princeton University evolutionary biologist who was not involved in the research.