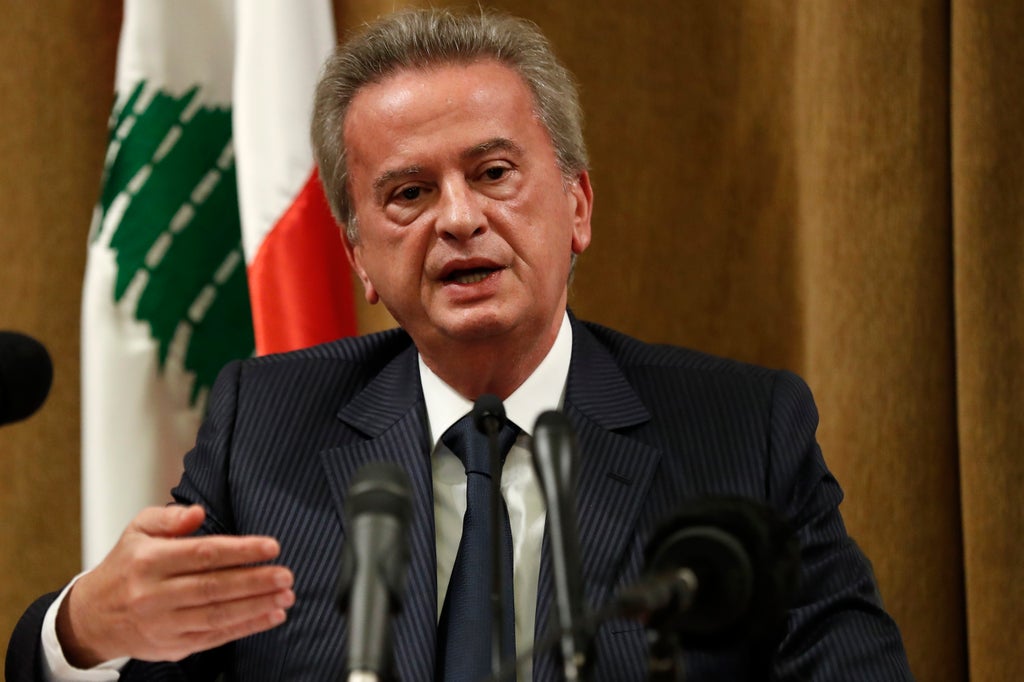 An investigative judge said Tuesday she may sue Lebanon’s police chief, accusing him of preventing a security force from bringing in for questioning the central bank governor, who is accused of corruption.

Judge Ghada Aoun told The Associated Press that central bank governor Riad Salameh failed to show up for questioning for a fourth time on Tuesday. She alleged that the banker was defying judicial orders because he has political protection.

Salameh, who is accused of corruption and dereliction of duty during Lebanon’s historic economic meltdown, is facing a lawsuit filed by a Lebanese anti-corruption group. The value of the national currency has plunged, foreign reserves are running low and the highly indebted government has been unable to agree on an economic recovery plan.

Many hold Salameh partly responsible for the financial crisis, blaming him for policies that only drove national debt up and caused the currency to tumble. Salameh, 71, has been in the post for nearly three decades and enjoys backing from most politicians, including the country’s prime minister.

Salameh is also being investigated in several countries including Switzerland, Luxembourg and France for potential money laundering and embezzlement. Local media reported in recent months that Salameh, his brother and an aid have been involved in illegal businesses, including money transfers abroad despite the informal capital controls imposed at home.

Aoun had issued an order to appear to Salameh earlier this month. But Salameh dismissed the lawsuit against him as political, saying it lacked evidence. It was filed by a group of lawyers known by the name “The People Want to Reform the Regime.” Salameh has called for Judge Aoun to be dismissed from the case and accused her of bias.

Salameh’s case revealed divisions within Lebanon’s security agencies after a force from State Security, an intelligence department, went to his home and office to bring him in for questioning and no one answered when they knocked on the door.

Aoun said she then told the force to break in after he failed to show up for questioning for a fourth time. At that point, she said, members of the Internal Security Forces, or police, warned State Security agents that they cannot go in by force otherwise “there will be a confrontation.”

Interior Minister Bassam Mawlawi denied there were divisions within the two security agencies, saying they are both carrying out their duties, according to the state-run National News Agency.

Aoun said she has sent a formal letter to the Internal Security Force chief Maj. Gen. Imad Osman, asking for an explanation regarding the incident.

“I have asked for an explanation, and I am considering filing a lawsuit against him,” Aoun said about Osman. “What he did is considered to be an offense, which is fighting authorities and preventing the implementation of a judicial order.”

ISF issued a statement later saying the force did not prevent State Security from bringing in Salameh, adding that the force’s mission is only to protect the central bank governor and does not have the authority to prevent the implementation of official memorandums.

The statement added that the matter was discussed between Osman and State Security chief Maj. Gen. Tony Saliba.

The division between the two security agencies mirrors the rivalry between the country’s politicians. Osman is considered close to former Lebanese Prime Minister Saad Hariri, who quit politics last month, and was a main opponent of President Michel Aoun, who backs Saliba.

The judge has also been blamed for being close to the president. They are both from the same family but not related.