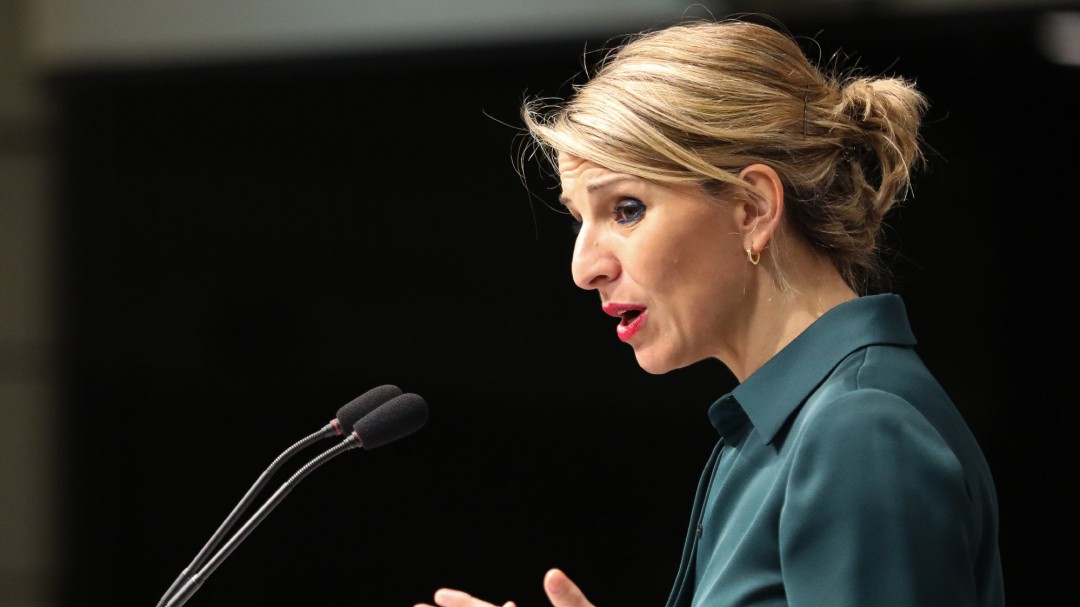 The Second Vice President of the Government of Spain and Minister of Labor and Social Economy, Yolanda Díaz, has warned that whoever “makes the labor reform fail” will have to “explain it to the workers” since it is a standard that is ” very difficult to “say” no. This is what Díaz has asserted in an interview with the newspaper ‘El País’ in which he has insisted that the reform, which has the objective of “tackling temporality” and “correcting precariousness”, is “difficult to overturn.”

“Whoever makes it fail will have to explain to the workers in Cádiz or those who are not negotiating their agreement why the extractiveness preferred by the previous norm has ended. Or they will have to tell the chambermaids or the private security workers of multi-service companies that they will continue to receive the minimum wage, (…) or a precarious one that instead of having a stable contract will continue with a two-day contract, “he warned.

In this sense, he has asked the parties to assess “well” what the new rule entails and has referred directly to the leader of the Popular Party, Pablo Casado, to regret that he has shown his refusal to the measure. “In addition to a huge error, it seems to me that it harms Spain,” he criticized, adding that the opposition is a “wasteland.”

Díaz has emphasized the importance of the agreement with the employers and the unions, an agreement that he has “prioritized” despite the fact that he would have liked to do other things and in which the greatest obstacle has been temporality, since it marks a model in the that there will be a “brutal trend change” in this regard, where “contracts are going to be stable and they are going to be presumed to be indefinite.”

“For me it would have been easier to do it unilaterally, but I wanted this agreement to come out with the agreement of the social agents,” he added in this regard, to stress that in the nine months of debate the negotiating table has presented “enormous sensitivity “. He has even indicated that it has been “altered on two or three occasions” for “reasons beyond the control of” the Ministry of Labor.

On the other hand, he has reported that the European Commission has been “very on top” of the negotiation and has participated in “intense” conversations in more than 70 meetings, but “at no time” has it put “any obstacle” to the norm. Díaz has also expressed his “absolute thanks” to the Government for its collaboration in the labor reform and has highlighted the “determining” role of the Minister of Finance and Public Function, María Jesús Montero. Along the same lines, he pointed out that this rule “was not easy” for the current Executive, in which, he recognized, “there are many voices” and “many ways of thinking.”

The minister has also pointed out that in the dialogue she has ensured that she complied with her “agreements” and, therefore, there has been no debate about the dismissal, since despite the fact that United We can try to incorporate it into the Government agreement with the PSOE , this one did not accept it. However, he has argued that the reform has “raised the protection for dismissal” and is made to “avoid them.”

As for Catalonia, he has defended dialogue, from which he should never have left, and has advocated “a Spain in which all Catalonia and all Galicia fit, because there are many Catalonia, many Galicia and many different realities”.

And on the other hand, already on Twitter, the second vice president has urged the European Commission to “reconsider” the proposal to classify as “green” investment in certain nuclear energy or natural gas projects. “Europe still has the opportunity to reconsider this decision to avoid distancing itself from scientific evidence and social demand,” emphasizes Díaz. In this sense, he has appealed to “the political responsibility to pursue a transformative and ambitious Green Deal for European citizens.”