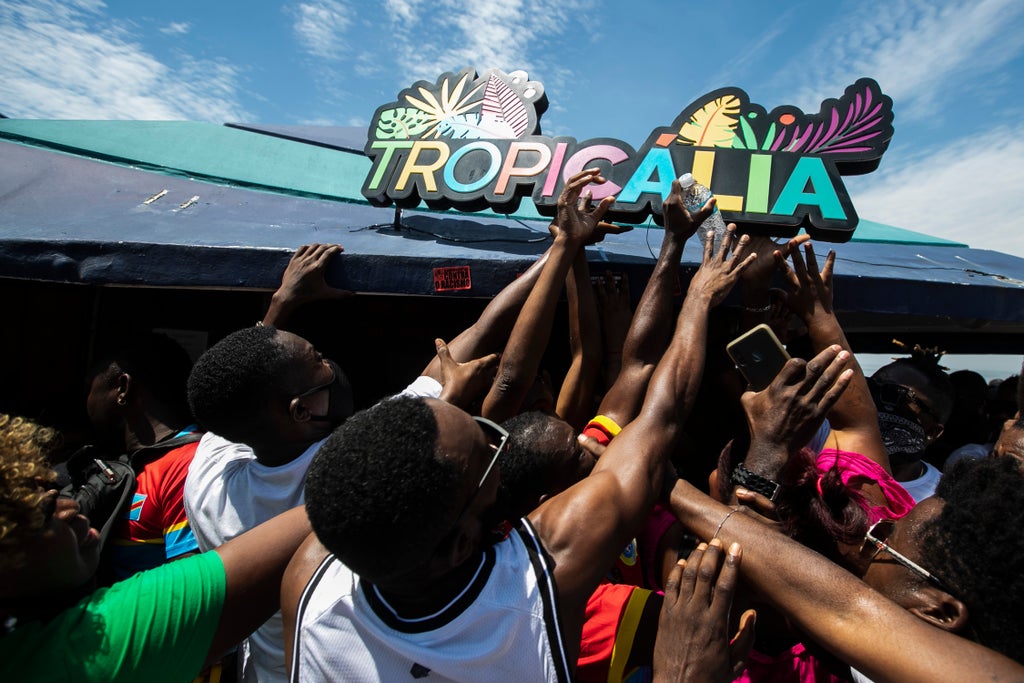 Demonstrators gathered on Saturday in Rio de Janeiro, Sao Paulo and other Brazilian cities to protest the killing of a 24-year-old Congolese refugee who was beaten to death on Jan. 24, and which sparked outrage and revulsion across the nation.

In Rio, they gathered outside the same beach kiosk where Moïse Mugenyi Kabagambe had recently been working in Barra da Tijuca, a neighborhood known for its upmarket condominiums and shopping malls.

The two lanes in front of the kiosk were covered with banners featuring images and photos of Moïse. Some of the signs were attached to the sound truck. One of them, held by more than 10 people, besides an image of the dead young man’s face, said “Justice for Moïse. Black Lives Matter! Stop killing us!”

“Moïse was beaten for 15 minutes, on a busy beach, where people pass by all the time, and at no time did anyone call the police and try to separate them,” said attorney Rodrigo Mondengo, of Brazil’s Bar Association in Rio. We have no doubt that if it were a white person there being beaten, someone would go to that person’s rescue.”

Kabagambe’s assailants were caught on security camera footage the police have released to the media. It shows three men violently attacking the young man, and over the course of 13 minutes holding him down and beating him with a rod — and continuing to do so even after he loses consciousness. They are later seen attempting chest compressions, then rolling his body over.

Police are still investigating the circumstances that prompted Kabagambe’s killing. Many felt no need to await official findings in a city where murder often goes unpunished; they asserted Kabagambe’s death was evidence of racism, xenophobia and impunity.

On Saturday in Rio, a group of protesters tore down the sign of the kiosk where Moïse was killed, but the organizers of the protest called for peace.

Kabagambe moved to Brazil in 2011 from his native Bunia, capital of Congo’s northeastern Ituri province, in 2011, his cousin Yannick Kamanda confirmed to AP. The country’s east has been mired in conflict for decades, and local media reports said the family had fled fighting between the Hema and Lendu ethnic groups.

“Moïse’s mother fled with her children from Congo to Brazil fearing they would die the same way as her mother, or disappear the same way as Moïse’s father,” said Rio state lawmaker Dani Monteiro, who heads the state legislature’s human rights commission and met with the family.

More than 2,500 Congolese people have been recognized as refugees in Latin America’s largest nation since 2000, according to the justice ministry, which oversees immigration.

“My son grew up here, studied here. All his friends of him are Brazilians, ”his mother of him told television network Globo at his burial of her on Jan. 30.“ I want justice. ”

In recent years, Brazil has also become an increasingly popular arrival point for Congolese and Cameroonians seeking to make the overland trek to the US border.

Congolese Foreign Affairs Minister Christophe Lutundula summoned the Brazilian ambassador on Wednesday in an effort to learn more about the circumstances surrounding the young man’s killing.

Rio state’s civil police force has arrested three men in connection with the killing. Following the release of initial information, the police’s homicide department placed the investigation under seal.

Family members say Kabagambe entered into an argument that night after complaining about two days of pay he was owed.

Police have questioned the kiosk’s owner, but not named him as a suspect, police said. City Hall suspended the kiosk’s permission to operate.

Also on Saturday, Rio’s City Hall announced that it will grant the management of the Tropicália kiosk to Moïse’s family. The note sent to the press highlighted that the site on the Barra beachfront will be transformed into a memorial in honor of the young man and a center of reference to African culture.

Acclaimed singers, actors, soccer stars and politicians shared outrage and disgust on social media throughout the week, joining their voices with those of the Kabagambe family to demand that the guilty be punished.

“This is not the Rio that I learned to love and that welcomed me with open arms!!!” star soccer striker Gabriel Barbosa, known as Gabigol, said on Twitter on Feb. 1. “We want justice.”

The young man’s death also mobilized anti-racism movements, with many denouncing an all-too-common scenario of the killing of a Black man. Protests were also held in Brazil’s biggest city, Sao Paulo, and in Belo Horizonte, Porto Alegre, Salvador, the capital Brasília and at least seven other Brazilian cities.

In Sao Paulo, hundreds of people gathered on Paulista Avenue, a major road. Banners and posters calling for justice were attached to the railings that separate its lanes.

In addition to Moïses, names of other Black people who were killed were called into the microphone. With their hands up, people shouted “Justice!” after each of them.

Mamanu, Kabagambe’s uncle, told radio station Gaucha that his nephew was a sweet kid who loved soccer and earned good grades in school, “always finishing first or second in his class.”

Friends and family described him at his burial as hardworking, a trait that had earned him the nickname “soldier.”

Yannick Kamanda, 33, told the AP in Rio that his cousin Moïse was “a loving, playful, humble, educated, and respectful boy” and that, for the family, only “happy memories” will remain.