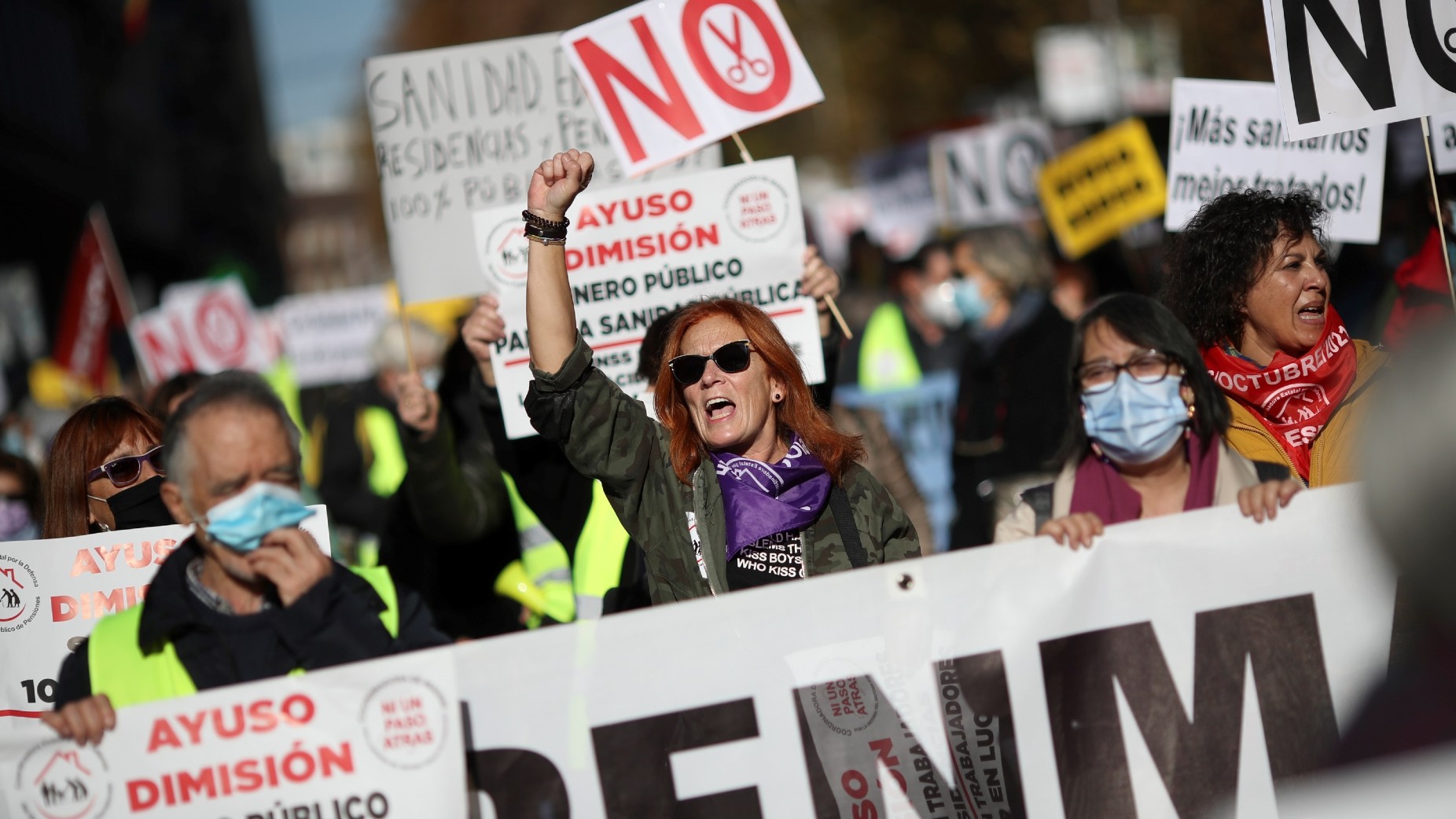 Thousands of people have participated in concentrations in defense of Primary Care that have been repeated in various cities of the country such as Madrid, Valencia, Zaragoza and Oviedo. The marches have been called by 110 entities and organizations to report the deterioration of a service with care overload and lacking in resources and demanding urgent measures to overcome the situation.

With a banner that includes the motto of the mobilization: “Let’s save Primary Care” and headed by the leaders of CCOO and UGT, Unai Sordo and Pepe Álvarez; the spokesman for the Spanish Federation in Defense of Public Health (FADSP), Marciano Sánchez Bayle, and the representative of Médicos Mundi, Enrique Revilla, in Madrid the protesters have read a statement at Puerta del Sol to underline the “intolerable deterioration” of this service, especially in the Community of Madrid.

In statements to the media prior to the mobilization, Unai Sordo has denounced the cuts suffered by Primary Care for more than a decade, which has to be reinforced budgetary, for which it has asked for at least 7.2% of GDP to finance Health, and that 25% of that money be go to Primary Care.

Against cuts and healthcare overload

For its part, Pepe Alvarez has underlined health “holes” sharpened in pandemic and it has demanded that the deficiencies be covered, for which it has insisted on public investment in Primary Care so that “hospitals work and patients are cared for correctly.”

Meanwhile, the FADSP spokesperson has remarked that the objective of the mobilization is to make visible the need to “save Primary Care” which is the “great forgotten” of health administrations, with a lack of investment, professionals and accessibility.

Has remembered that many health centers are closed, in others the hours have been reduced and in the Community of Madrid the emergency services have been eliminated.

Sánchez Bayle has addressed to the administrations the message that the time of promises is over and now they touch on “facts” because Primary Care must be the fundamental axis of the health system, “and if it does not work properly, public health will collapse and the right to health will cease to be effective.”
And it has advanced that these groups will continue to mobilize until they achieve their objectives.

A deterioration compounded by the pandemic

Valencia, Alicante and Castelló have also hosted concentrations this Sunday for the quality of care and to demand that this area be included in the political agenda.

In a manifesto, CCOO has denounced “the deteriorating situation” of Primary Care, which has been aggravated by the pandemic, and has demanded more budget and more personnel for this area, guarantee open health centers without waiting lists and prioritize face-to-face consultations.

The rallies called by this union took place at noon in the Plaza de la Muntanyeta in Alicante, the Plaza María Agustina de Castelló and the Plaza de la Virgen de València, in which the general secretary of CCOO PV, Ana García, participated. within the framework of a state mobilization.

While about two hundred people have concentrated before the Campoamor Theater in a protest enlivened by a wind music group and convened by the Platform for Health and Public Health of Asturias to demand improvements in Primary Care.

Fifty organizations had joined the mobilization, among them unions and medical or neighborhood organizations, and the concentrates carried banners with legends such as “With health you do not play”, “Face-to-face care is essential”, “First, the Primary “or “The priority investment is health investment.”

During the mobilization, a manifesto was read in which it was warned that the deterioration of Primary Care “comes from years ago, long before the COVID-19 pandemic” that has exacerbated its problems and has confirmed the lack of resources and professionals of a model “that does not resolve the physical and functional barriers that hinder access to health care.”

And in Zaragoza more than a hundred people have concentrated in the Plaza Paraíso under the slogan ‘Let’s save Primary Care’ to request urgent measures from the Public Administration to improve the current situation of this health service.

The protest has been developed under the umbrella of the initiative ‘Let’s save Primary Care’, to which more than a hundred groups and associations have joined and which has called concentrations in several cities of the country, as is the case of the Aragonese capital.