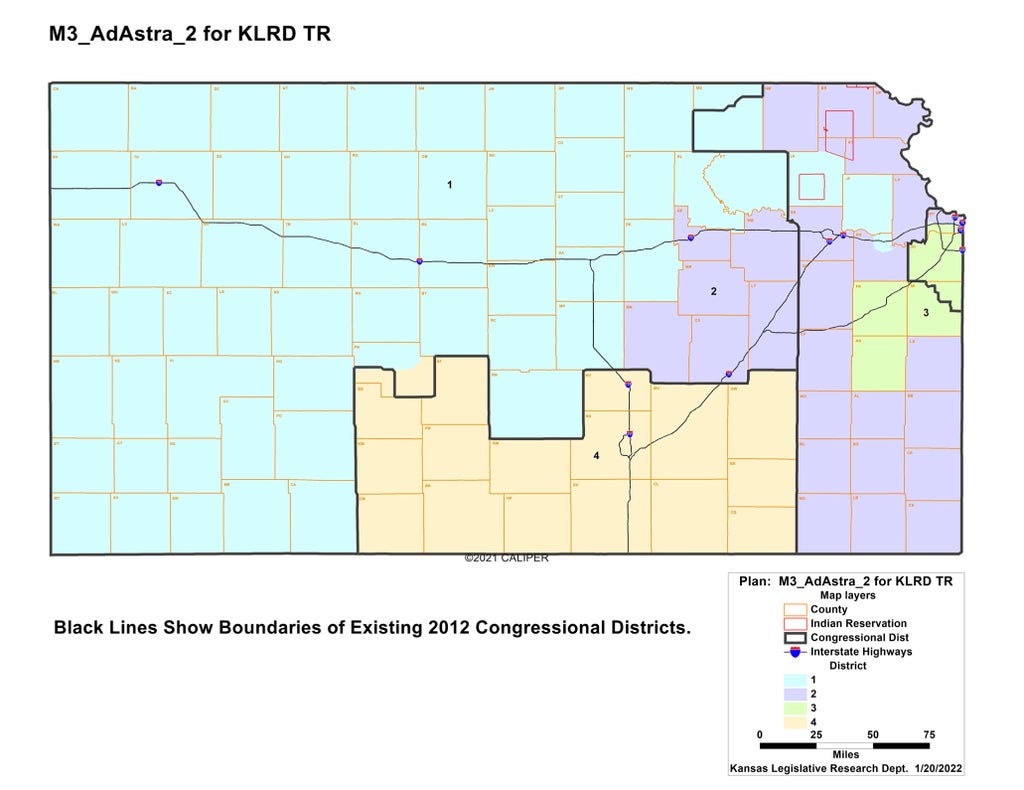 Democrats sued Kansas officials on Monday over a Republican redistricting law that costs the state’s only Democrat in Congress some of the territory in her Kansas City-area district that she carries by wide margins in elections.

A team of attorneys led by Democratic attorney Marc Elias’ firm filed the lawsuit in Wyandotte County District Court in the Kansas City area. Elias has been involved in lawsuits in multiple states, including Georgia, North Carolina and Ohio, and he promised that the new Kansas map would be challenged when the GOP-controlled Legislature on Wednesday overrode Democratic Gov. Laura Kelly’s veto of it.

The lawsuit was filed on behalf of five voters and a Kansas voting-rights group, Loud Light. The defendants are the elections commissioner for Kansas City, Kansas, and Kansas Secretary of State Scott Schwab, the state’s top elections official.

Kansas is part of a broader national battle over redrawing congressional districts. Republicans hope to recapture a US House majority in this year’s elections, and both parties are watching states’ redistricting efforts because they could help either pick up or defend individual seats.

The Kansas redistricting law removes the northern part of Kansas City, Kansas, from the 3rd District that US Rep. Sharice Davids represents and puts it in the neighboring 2nd District, which includes the state capital of Topeka but also rural communities across eastern Kansas. Kansas City is among Republican-leaning Kansas’ few Democratic strongholds.

Elias has said the GOP map for Kansas is “blatantly unconstitutional.” Democrats argued that it amounts to partisan gerrymandering aimed at costing Davids ‘her seat de ella, while diluting the clout of Black and Hispanic voters by cutting their numbers de ella in her district. They also have argued that the map is unacceptable because it fails to keep the core of the state’s side of the Kansas City area in a single district.

“I think Sharice has always been a target,” Kelly said in an interview after her veto was overridden. “Now, would it be Sharice specifically? It’s the fact that there’s a Democrat in the 3rd District congressional seat. They want that to change.”

The redistricting law also moved the liberal northeast Kansas city of Lawrence — another Democratic stronghold and home to the main University of Kansas campus — out of the 2nd District. The city of 95,000 about 40 miles (64 kilometers) west of Kansas is now in the already sprawling 1st District of central and western Kansas with small conservative communities, some six hours away by car.

Republicans have defended all of those moves as necessary to make the state’s four congressional districts as close in population in possible after a decade of population shifts. Under the law, each of the districts has the ideal population of 734,470 residents.

Kansas Attorney General Derek Schmidt, the presumed Republican nominee for governor this year, said of the new district lines: “We are prepared to vigorously defend them against any partisan political lawsuits that long have been threatened.”

The Kansas City area has too many residents for a single congressional districts, and Republicans opted to split more diverse Kansas City, Kansas, rather than whiter and wealthier suburbs to the south. They’ve noted that those suburbs have never been divided between two districts.

GOP lawmakers also rejected criticism of the map as racial gerrymandering, noting that while the percentages of Black and Hispanic voters dropped in the 3rd District, they increased in the 2nd. And they argued that even with the new lines, Davids would have won in 2020.

For decades, lawsuits over congressional redistricting in Kansas have been filed in federal court and decided by a panel of three federal judges. But in 2019, the US Supreme Court ruled that complaints of partisan gerrymandering are political issues and not for federal courts to resolve.

Some Democrats hope that the Kansas courts will limit or prohibit partisan gerrymandering or set other guidelines that doom the GOP map. Five of the Kansas Supreme Court’s seven justices were appointed by Democratic governors, including three by Kelly.