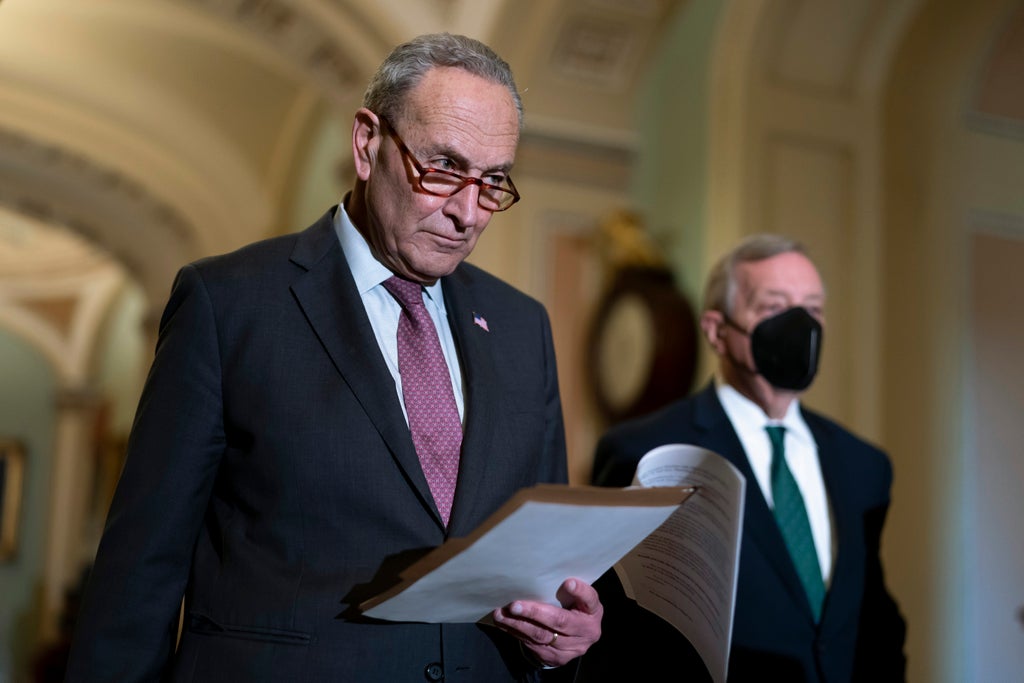 Barrett was confirmed exactly one month after President Donald Trump nominated her to replace the late Justice Ruth Bader Ginsburg, and just five weeks after Ginsburg’s death in September of that year. Democrats sharply criticized that timeline at the time, arguing that most confirmations had taken much longer and that Republicans were trying to stall the nomination should Trump lose re-election.

But now that they hold the presidency and the Senate, albeit just barely, Democrats navigating the tricky politics of a 50-50 chamber are considering an equally fast schedule, even if Breyer doesn’t officially resign until the summer.

In remarks, Senate Majority Leader Chuck Schumer, DN.Y., and Senate Judiciary Committee Chairman Dick Durbin, D-Ill., made it clear that they will act quickly once President Joe Biden makes your choice. Biden said as a candidate that if given the opportunity to nominate someone to the court, he would make history by choosing a black woman. The White House has reiterated Biden’s campaign promise since his election.

Schumer said the nominee “will be considered and confirmed by the full United States Senate with all deliberate speed.” Durbin said he hopes to move the nomination “quickly” through the committee.

The nomination offers a chance for a reset for Biden and the Democratic Senate after Barrett’s confirmation left the court with a new 6-3 conservative majority and as they struggled to pass key points on Biden’s political agenda. Democrats hope to smoothly replace the 83-year-old liberal judge, and some Republicans may be willing to support a Biden candidate. But Democratic leaders are well aware that the death or illness of just one of their members could change control of the Senate and upset their plans.

The Senate plans to launch the confirmation process as soon as Biden makes the nomination, regardless of when Breyer officially withdraws, according to a Senate aide who was not authorized to publicly discuss the planning and spoke on condition of anonymity.

Democrats could quickly hold committee hearings and even a full Senate vote before Breyer resigns, the aide said. The Senate would simply refrain from sending the president the final confirmation vote paperwork until Breyer has withdrawn.

With such a narrow majority, Schumer will face strong pressure to hold his caucus together. Two moderate Democrats, Sens. Joe Manchin of West Virginia and Kyrsten Sinema of Arizona, have repeatedly opposed their party’s political goals and could oppose a Supreme Court nominee if they deemed him too liberal.

In a statement, Manchin said he takes the Senate’s role in advising and consenting to Supreme Court nominations “very seriously” and looks forward to meeting with and evaluating the eventual nominee.

At the same time, Democrats are hoping for a handful of Republican votes. Senators Susan Collins of Maine, Lisa Murkowski of Alaska and Lindsey Graham of South Carolina, for example, voted last year to confirm federal Circuit Judge Ketanji Brown Jackson, one of Biden’s potential candidates.

Graham indicated in a statement Wednesday that he is unlikely to support Biden’s pick, whoever he is.

“If all Democrats stick together, which I hope they do, they have the power to replace Justice Breyer in 2022 without the support of a single Republican vote,” Graham said. “Elections have consequences, and that is most evident when it comes to filling vacancies on the Supreme Court.”

It will be the first time Democrats have had a majority in the Senate and the opportunity to fill a vacancy on the Supreme Court in more than 11 years. Since Justice Elana Kagan was confirmed in 2010, the GOP-led Senate has confirmed three justices, all Trump-term nominees: Neil Gorsuch, Brett Kavanaugh and Coney Barrett.

All three confirmation battles were bitter for Democrats.

Gorsuch was confirmed a year after Republicans blocked the election of President Barack Obama to serve on the court, now Attorney General Merrick Garland. Kavanaugh was confirmed after a harrowing hearing in which a high school acquaintance, Christine Blasey Ford, accused of sexually assaulting her; Kavanaugh angrily denied it.

Barrett was confirmed in 2020, replacing liberal icon Ginsburg and changing the balance of the court.

With the roles reversed, frustrations have lingered on both sides over the increasingly partisan confirmation battles.

“Whoever the president nominates will be treated fairly and with the dignity and respect that someone of their caliber deserves, something Justice Kavanaugh and other Republican candidates in the past have not been accorded,” said Republican Senator John Cornyn of Texas, who is on the Senate Judiciary Committee.

Senate Republican Leader Mitch McConnell of Kentucky declined to comment on Breyer’s withdrawal, saying he did not want to “put the cart before the horse” before the judge made an official announcement.

“You have the right to do that whenever you want,” McConnell told reporters at an event in his home state. “And when I do, I’ll have an answer to his long and distinguished career.”

Democratic senators quickly joined the effort to make the selection of Biden historic: the first black woman to be a judge.

“The Court must reflect the diversity of our country, and it is unacceptable that never in the history of our nation has there been a black woman on the Supreme Court of the United States. I want to change that,” said Sen. Patty Murray of Washington, the third-place Democrat.

Durbin said Biden “has an opportunity to nominate someone who will bring diversity, experience and an impartial approach to the administration of justice.”

In addition to Jackson, other potential candidates include California Supreme Court Justice Leondra Kruger and US District Judge Michelle Childs, whom Biden has nominated to be an appeals court judge. Childs is a favorite of Rep. James Clyburn, DSC, who crucially endorsed Biden just before the state’s 2020 presidential primary.

Many of Biden’s judicial candidates have reflected his commitment to diversifying the federal judiciary, both racially and professionally. He will also face some pressure to appoint a younger judge who could shape the court for decades, one of Trump’s main considerations for his judicial picks. Jackson is 51, Childs is 55 and Kruger is 45.

Biden noted in the run-up to the South Carolina primary that catapulted him to the Democratic nomination that he was “eager to make sure that there is a Black woman on the Supreme Court, to make sure that we actually have full representation. ”