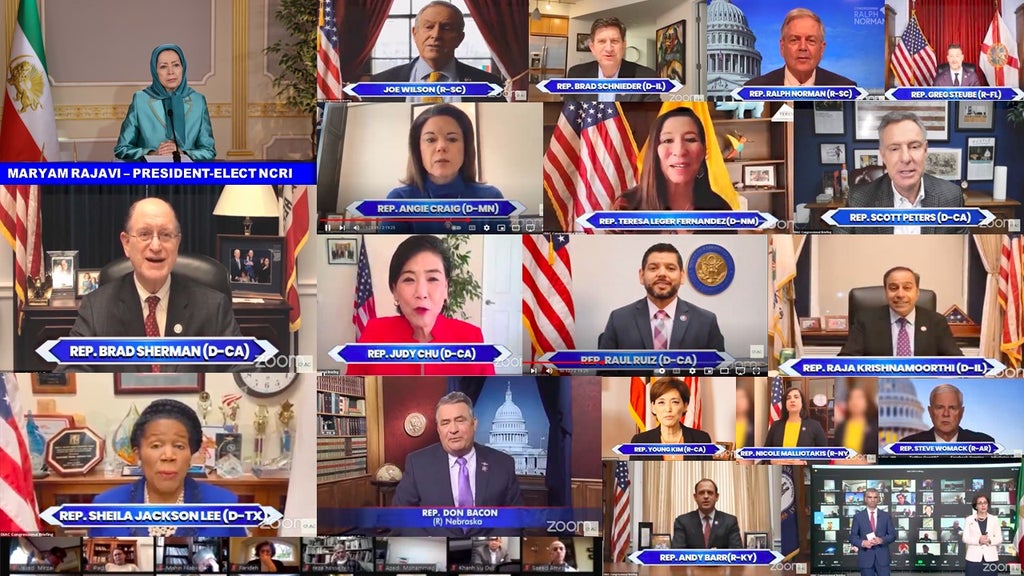 Proponents of further pressure and an aggressive stance towards Iran’s government are continuing to make their voices heard on Capitol Hill even as the Biden administration looks to be leaving them behind in favor of the policies pursued by the previous Democratic administration.

On Friday dozens of lawmakers in both major parties attended an event hosted by the Organization of Iranian American Communities, which declared that it supports the goals National Council of Resistance of Iran (NCRI), an international group of Iranian dissidents who fiercely oppose Iran’s government and in particular its current president, Ebrahim Raisi, for his alleged participation in human rights abuses and massacres.

At the event, the members of Congress (a group largely made up of Republicans as well as centrist or conservative Democrats) affirmed their support for Iran’s people while denouncing the Iranian government. Meanwhile, the event’s keynote speaker Maryam Rajavi used her address de ella to call on the assembled lawmakers of both parties to push the US government away from the path currently being taken by the Biden administration that appears to be leading the US and Iran back into compliance with the 2015 nuclear deal.

Democrats in attendance included Reps Zoe Lofgren, Sheila Jackson Lee, and Brad Sherman, the latter of whom serves on the House Foreign Affairs Committee and its relevant subcommittee on the Middle East. They listened as Ms Rajavi denounced “a decade [of] useless negotiations with the regime” which she argued led to “the opportunity to advance its nuclear project”.

She would go on to push for a much stronger position than the Biden administration is taking towards Iran; a policy of nuclear site inspections “anytime and anywhere” and a commitment to the UN sanctions lifted as part of the 2015 deal, then reimposed by the US after the Trump administration with drawn from the agreement.

A failure to do so will only lead to “more conflict, carnage, and insecurity in the region,” she warned.

Democrats who issued statements at or following the event largely affirmed their endorsements for a House resolution that expressed support for Iran’s people and calls on the US to “prevent the malign activities of the Iranian regime’s diplomatic missions”, but stayed away from sharing reservations about the Biden administration’s approach towards Iran.

“Today we commemorate the anniversary of the 1979 revolution for freedom in Iran. We say no to the shah’s single-party dictatorship, no to mullahs’ theocracy, and yes to democracy and a republican form of government,” said Rep. Raja Krishnamoorthi, a Democrat from Illinois.

He added: “I am proud to be a cosponsor of House Resolution 118 to express support for the Iranian people’s desire for a democratic, secular, and nonnuclear republic of Iran. And I support the resolution’s condemnation of violations of human rights and state-sponsored terrorism by the Iranian government.”

Other members of the party who have attended events held by OIAC or NCRI in the past have been less hesitant to share their advice on the matter. Former Congressman Eliot Engel, who chaired the Foreign Affairs panel, told The Independent last year that he was pushing the president to reach “a new deal, a better deal, one that brings Iran closer to democracy” rather than return to the one negotiated under his former boss, Barack Obama.

Biden administration officials told the New York Times in late January that the administration was on the verge of reaching an agreement to revitalize the 2015 nuclear deal, a development that would be a significant blow to Iran hawks who saw their policies championed by the Trump administration and former Secretary of State Mike Pompeo and have Argued that economic pressure including international sanctions can weaken Iran’s regime to the point of total collapse.

Under the terms currently being discussed by senior diplomats from both countries, “we can see a path to a deal if those decisions are made and if they are made quickly”, a State Department official told the Times last month