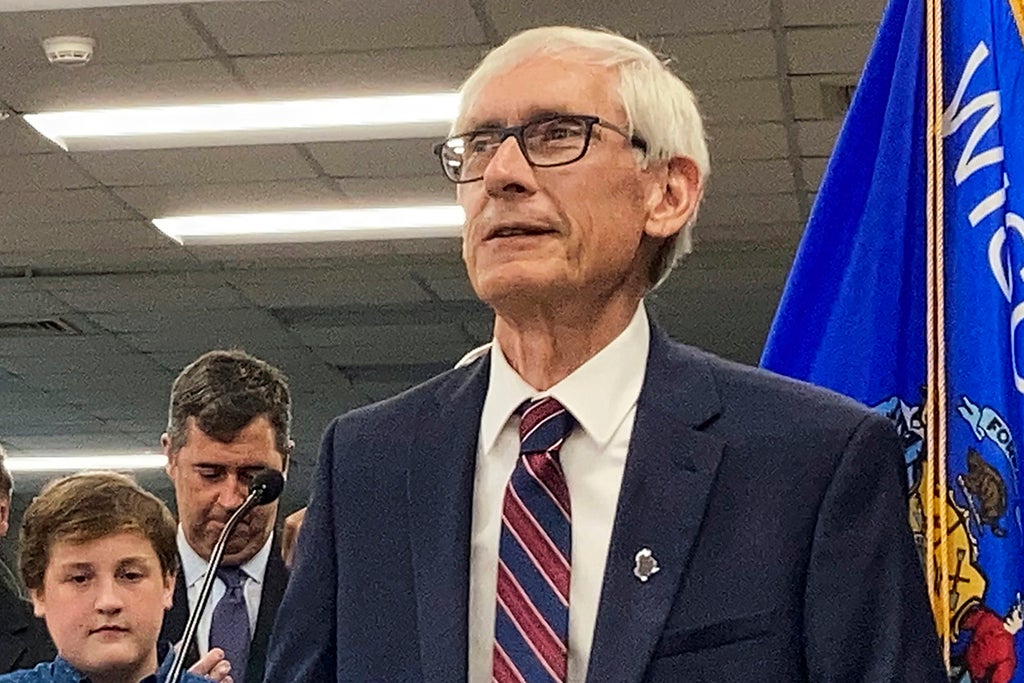 Wisconsin Gov. Tony Evers was in a familiar spot earlier this month when Republican legislators sent him a bill that would have banned anti-racist teachings in schools. For the 66th time since taking office in 2019, he has pulled out his veto pen.

The rejection was the latest reminder of the crucial role Evers and a select group of fellow Democratic governors play in some of the most politically divided states. They are the only backstop against a wave of GOP-backed legislation targeting everything from abortion rights and school curricula to access to voting.

“I have to prevent some really bad things from happening,” Evers said in an interview. “It is a bit lonely, but I know I’m representing the people of Wisconsin.”

Wisconsin is one of four states emerging as top priorities for Democrats in an election year when the party is facing fierce political headwinds. In those states — Kansas, Michigan, Pennsylvania and Wisconsin — Republicans control the state Legislatures and Democratic-held governorships are on the ballot in the fall.

If the governorships switch parties, a flood of GOP legislation that has so far been blocked would likely become law. That’s especially concerning for Democrats when it comes to voting rights. The four incumbents—Evers, Kansas Gov. Laura Kelly Michigan Gov. Gretchen Whitmer and Pennsylvania Gov. Tom Wolf — have vetoed more than a dozen bills aimed at restricting voting.

Those moves were particularly important in Wisconsin, Pennsylvania and Michigan, all narrowly divided states that could decide the 2024 presidential election. If Republicans win the governor’s race in any of those states, they will almost certainly approve voting restrictions that have so far been rejected.

In Wisconsin, for example, the Legislature is fast-tracking a host of bills changing election administration and voting rules, all of which Evers is expected to veto but that other Republican candidates for governor support.

Governors also have an important role in the mechanics of presidential elections — under federal law, the electors say they reflect the winners of their state get extra weight in any congressional fight over certifying the choice of the next president. That means in more extreme scenarios, GOP governors may seek to reject Democratic electors in a presidential race, a step then-President Donald Trump pressed some Republicans to take in 2020.

Many GOP candidates running for governor this year have expressed support for Trump’s lie that the last election was stolen. In Wisconsin last week, state Rep. Timothy Ramthun, a conspiracy theorist who was disciplined by Republican leadership over false election claims, filed paperwork to run for governor.

Federal and state election officials and Trump’s own attorney general have said there is no credible evidence the election was tainted. The former president’s allegations of fraud were also roundly rejected by courts, including by judges Trump appointed.

Gov. Roy Cooper of North Carolina, the head of the Democratic Governors Association, said the four governors are “standing in the breach against Republican state legislatures’ attacks on voting rights.”

Cooper, who also contends with a Republican legislature, said the governors are “protecting the foundation of our democracy.”

Republicans argue that Democrats are being obstructionist and simply refusing to work with the party that controls the legislatures in their states.

“An inability to work effectively with their legislature, regardless of party control, will ultimately be viewed by voters as a failure of leadership,” said Phil Cox, a Republican strategist and former executive director of the Republican Governors Association.

Democrats aren’t limiting their work this year to protect their position in the four states in question. They are also hoping to pick up Republican-held seats in states like Georgia, Massachusetts and Maryland.

But the DGA is stepping up its opposition research efforts on Republican candidates in Kansas, Michigan, Pennsylvania and Wisconsin. And the Democratic candidates themselves are sitting on sizable campaign accounts.

At the end of 2021, Evers had about $10 million while Josh Schapiro, the likely Democratic nominee for governor in Pennsylvania, had $16 million, according to state campaign records. In Kansas, Kelly is expected to have a more difficult bid for reelection than in 2018, when she won in a three-way race. She had $2 million at the end of last year.

And in Michigan, Whitmer was sitting on $10 million. An independent expenditure group affiliated with the DGA also ran a pro-Whitmer ad in Michigan worth roughly $200,000 during December and January.

Whitmer has vetoed multiple bills that would make it harder to vote, rejecting nine such measures in October alone.

“Gov. Whitmer is the backstop in a world where, if Republicans were to control legislative chambers and the governor’s office in any of these states, stripping voting rights would just automatically become law,” said Patrick Schuh, Michigan director of the Democratic-leaning voter access advocacy group America Votes.

One measure would have tacked on extra identification requirements for absentee ballot requests and blocked the state’s top election official from sending vote-by-mail requests out widely. Republicans have been forced to try to end-run Whitmer by attempting a ballot initiative, one that Schuh’s group hopes to counter with its own.

In Pennsylvania, Wolf blocked similar efforts, vetoing a massive bill that would also have reduced the days drop boxes for absentee ballots would be open. Wolf, finishing his second four-year term, is not seeking reelection, but Shapiro supports his vetoes.

Those Democrats have some advantages that could help them politically this year, including robust budget surpluses, state revenue that outperformed dire pandemic forecasts and billions in federal COVID-19 relief and incoming infrastructure money.

In Wisconsin, Evers has plans for the state’s largest budget surplus, $3 billion, including child care tax credits for working families and similar credits for full-time caregiver volunteers for the elderly and homebound, moves he sees as smart use of extra money at a time of need. With the flatness of low expectations, the mild-mannered former state school superintendent said he hopes Republicans “take a look at it.”

“I think the Republicans will be hard-pressed to say no to this. But they’ve done it before,” Evers said. “Whatever the number I’ve vetoed, it’s paltry compared to the number I’m going to.”