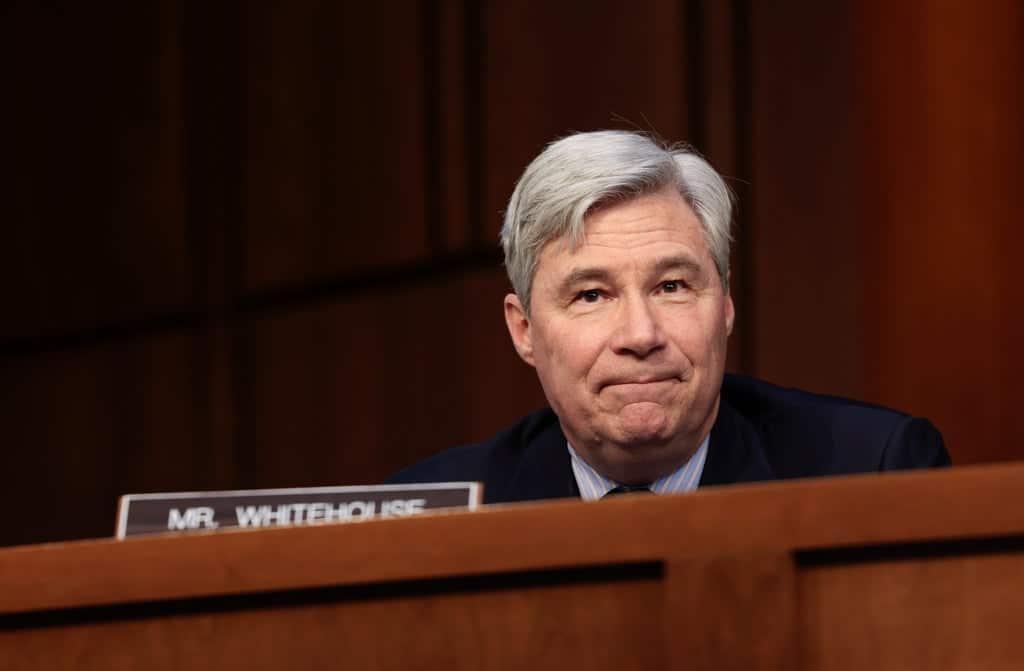 Thursday’s confirmation hearing for Ketanji Brown Jackson at the Senate Judiciary Committee veered off into a debate about the 2020 election and the legitimacy of Joe Biden’s victory.

A Democrat on the committee pressed the attorney general of Alabama, a vocal supporter of the former president’s falsehoods about the 2020 election, on Thursday whether Mr Biden was the “duly elected” president; the Republican official, Steve Marshall, repeatedly dodged his questions until the senator moved on.

Sen Sheldon Whitehouse’s questioning of Mr Marshall came after Mr Whitehouse laid into the attorney general’s work to undermine the legitimacy of the 2020 election during his allotted time at the hearing. Ms Jackson was not present for Thursday’s hearing, which was focused on testimony from outside experts called by the panel’s members, and instead spent the day meeting with senators elsewhere on Capitol Hill. Mr Marshall was one of those officials called by Republican members of the committee to testify against Ms Jackson’s nomination to the Supreme Court.

The Alabama AG heads up fundraising for the Republican Attorneys General Association (RAGA) and also led the group’s “Rule of Law Defense Fund”, a nonprofit that helped organize protests in Washington on January 6 when supporters of Donald Trump stormed the US Capitol. That work was the focus of Mr Whitehouse’s probing questions as the senator sought to determine whether state GOP officials still believed the false claims made by Mr Trump about his defeat of him.

“Is Joseph R Biden of Delaware the duly elected and lawfully-serving president of the United States?” Mr Whitehouse asked Mr Marshall at one point in his testimony of him.

“He is the president of this country,” said Mr Marshall in response.

After the pair repeated the exchange almost word-for-word, Mr Whitehouse shifted his tactics.

“Are you answering that, omitting the language ‘duly elected and lawfully serving’, purposefully?” asked Mr Whitehouse.

Mr Marshall repeated that he was answering the question, but continued to not respond to whether he believed Mr Biden’s victory was “lawful”.

The senator continued to press Mr Marshall, but it was clear that the AG was refusing to publicly state his position on the issue. He did contend, however, that he had not been asked to give evidence or testimony to the House’s investigation into the January 6 attack on Congress.

Former President Trump has continued to insist (falsely) that he was the rightful victor of the 2020 election and that Mr Biden was elected with the help of a massive, multi-state effort to defraud Mr Trump with fake votes, compromised election machines, and other claims for which his campaign’s attorneys never provided any evidence beyond sworn affidavits from supporters claiming they saw or believed the fraud to have occurred.

He has also told supporters in private conversations at his Mar-a-Lago resort, according to The New York Times’s Maggie Haberman, that he could be “reinstated” as president, despite there being no provision in US code or law for that to occur.

Mr Trump remains a heavy favorite to win the 2024 GOP presidential nomination, and had publicly teased a third bid for office since nearly the day he left the White House in 2020.