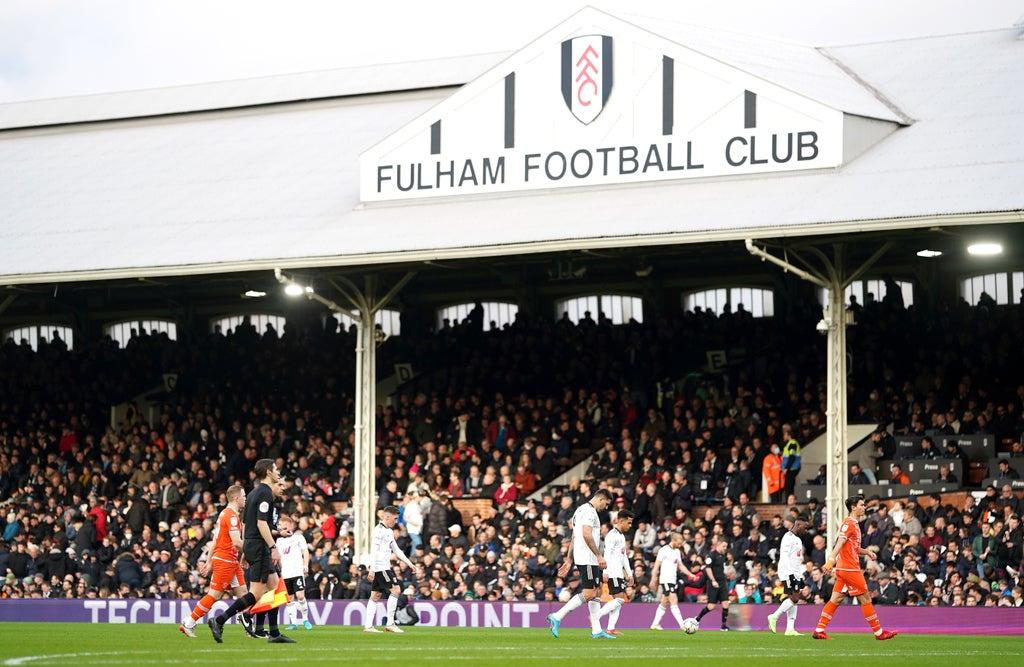 These are strange times. Fear is in the air. Uncertainty reigns. A sequence of events that appears unprecedented can assume a significance that goes beyond reality.

On Saturday, four EFL games were interrupted by medical emergencies in the stands. At Craven Cottage, Fulham’s 1-1 draw with Blackpool was delayed for more than half an hour while a fan was treated and transported to hospital. Paul Parish, who suffered a cardiac arrest, later died.

There was better news from Boundary Park, where Oldham Athletic’s 0-0 draw against Rochdale was held up for 23 minutes. The individual involved was reported to be in stable condition after being taken into medical care.

The scares at Wycombe Wanderers versus MK Dons and Bradford City’s game against Crawley Town were less severe. Yet four stoppages in one afternoon seem to be part of an emerging pattern. There have been a series of similar incidents over the past few months. The list of fixtures halted because of illness involving spectators is growing. Teams have been taken off the pitch at St James’ Park, Vicarage Road, White Hart Lane and St Mary’s over recent weeks.

This is a new and frightening development. There must be a reason for it. The pertinent question is straightforward: what is different now that would explain this unnerving spate of emergencies. There is a seemingly obvious answer: the pandemic. Anti-vaccination conspiracy theorists took to social media on Saturday evening to give their take on what is happening. “This is not normal,” tweeted one. “Stop thinking it’s normal.”

In one sense that statement is correct. This is a new phenomenon. The apocalyptic overtones are laughable, though. Anyone who has attended football regularly for any length of time knows that people die at matches. It’s just that in the past the game continued on, oblivious to their fate.

After more than 50 years of match-going, I carved up some of the obviously fatal situations I’d witnessed over the years when health issues caused death. The most poignant one that came to mind on Saturday occurred at Craven Cottage in 2005, during a 0-0 draw between Fulham and Charlton Athletic. Returning to the seat after the half-time interval, it became clear that a man three seats away had turned unresponsive during the break. The stewards alerted St John Ambulance medics and they tried to revive him for 20 minutes while the action continued on the pitch. The vast majority of those in attendance were unaware anything was happening.

Going further back, I recall two people dying on the old standing Kop at Liverpool in the 1970s. Spectators often became ill or distressed on the standing terraces. If the crowd was sparse, police and medics would hurry up the steps to attend to them. For big games, where it was impossible to penetrate the swaying mass, the patient would be hauled up by those around them and passed down over the heads of the crowd to the side of the pitch. The majority of those afflicted were fainting victims who were easily revived. Nevertheless, there were times when the ambulance staff became embroiled in intense attempts to resuscitate people behind the goal. The game went on merrily, without most of the crowd, the players or the referee showing the slightest of interest in their fate.

When Liverpool played at York City in the FA Cup in 1985, a man collapsed a yard or two in front of me. From the shaking heads of the police and St John Ambulance volunteers as they removed him, there was no hope. Then I was reminded that I was present at a game where one of English football’s most iconic figures died. Bill Dean – he hated being called ‘Dixie’ because of the racist undertones to the nickname – scored 60 league goals in a single season for Everton, a record that is unlikely to be broken. He had a heart attack while watching the Merseyside derby at Goodison Park in 1980. Word spread to the Park End that one of the game’s greats had passed even before the final whistle.

Harry Catterick was another Everton hero who died during a game. The title-winning manager also had a cardiac arrest at Goodison, five years after Dean. They are two famous examples. The majority of people who have died while watching football have gone unnoticed by everyone except their families, the spectators who were in close proximity and those who attempted to save them.

And no wonder there is the occasional death or health scare. Lots of people go to football matches. On Saturday alone, in the region of 300,000 attended EFL games. That figure more than doubles when the Premier League is active. There are bound to be individuals within that number who get sick or even die in stadiums. The big difference now is that priorities have changed. The health of those who have fallen ill has become the priority over the continuation of the action.

There is nothing new here but a change of attitude. Far from it foreshadowing doom, it is a positive development. First responders say that a break in play reduces the risk to the patient. It calms the crowd, it makes it easier for medics to move around because they are not blocking views and it allows them to focus and communicate without being distracted by shouting and chanting. Plus, it means club doctors can get involved if needed.

Of course, football’s status as one of the biggest expressions of British culture makes it particularly vulnerable to those who seek political capital. Christian Eriksen’s collapse at the Euros was seized upon by some as proof that the vaccine was causing a spike in premature deaths of professional athletes. Fifa studies conducted and completed before the pandemic indicate that this is not the case. Evidence rarely stops scare stories, though.

People will continue to die of natural causes at matches. At rugby and cricket, too. Anywhere crowds gather in large numbers means that there is a possibility that someone will become ill. This is unavoidable. There were four stoppages on Saturday. Regrettably, one person died. Another was hospitalized. The other two had happier endings. Four games out of 32 EFL fixtures looks like a frightening percentage. One fatality in about 300,000 spectators – as regrettable as it is – paints a less terrifying picture.

For most of its history, football ignored medical emergencies among fans and carried on. No longer. Stopping games is the only thing that has changed and it is a change for the better. It maximizes the chances of survival for those who suffer from serious conditions. Cranks are trying to hijack this positive move for their own insidious agenda.

Halting play has nothing to do with pandemics or vaccines. It’s about human decency. Anyone who tries to tell you differently puts conspiracy over compassion.