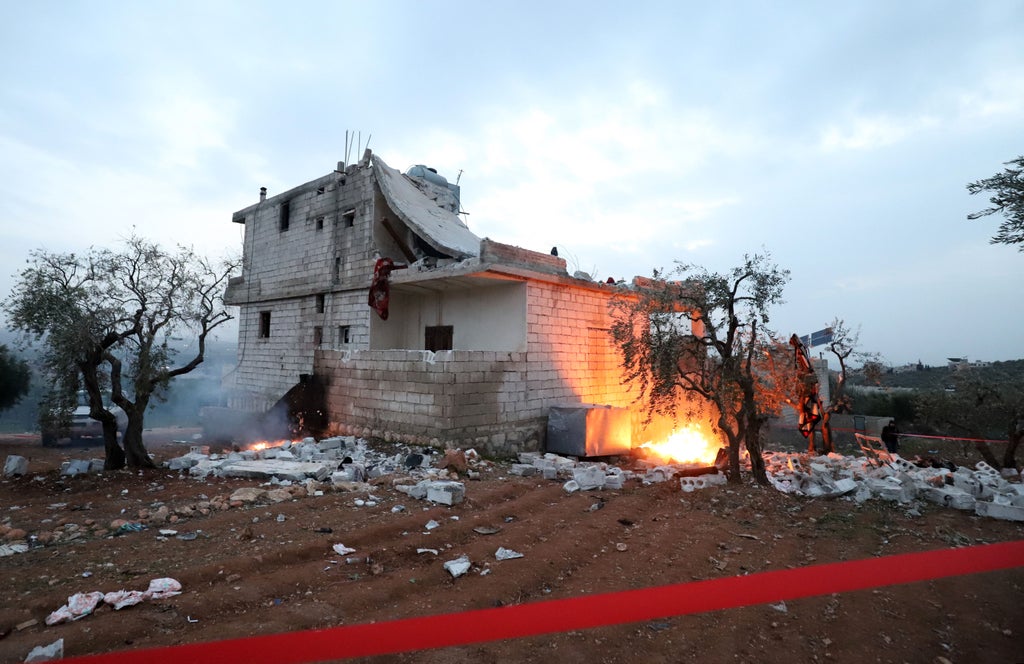 There is no doubt the optics did not look good for Turkey.

The leader of the Islamic State – Abu Ibrahim al-Hashimi al-Qurashi – was killed during a US raid on his home in Atmeh, northwest Syria, on Thursday. The house was reportedly located just a few hundred meters from a Turkish-controlled checkpoint and in a village that sits just a kilometer away from the Turkish border.

The attack on al-Qurashi came just over two years after his predecessor Abu Bakr al-Baghdadi was found and killed in a US-led operation in another village 15 kilometers south of Atmeh.

It was again a border region in Idlib province, which for years had been under the tight control of either Turkish-backed Syrian forces or Hayat Tahrir al-Sham (HTS), a jihadist faction formerly known as the Nusra Front. It is headed by Abu Mohammad al-Golani, former leader of the Al Qaeda branch in Syria.

Turkey has nearly a dozen military observation posts in the opposition-held region and is regarded as a kind of guarantor for that corner of Syria. If you roughly carve up the war-torn country into spheres of international influence, Idlib has long been filed under “Turkey’s patch”.

The Kurdish-led Syrian Democratic Forces (SDF), the US’s closest allies in Syria and the bitter foes of Turkey, were quick to capitalize on this. Farhad Shami, an SDF spokesperson, took to Twitter to make accusations – in English – that Turkey “protected” the late Isis leader.

“Is there any doubt that Turkey [has] turned areas [of] North Syria [into a] safe zone for Daesh leaders?” he said late on Thursday.

See also  Man City are 'by far the best' and are assured of the Premier League title, says Ralph Hasenhuttl

Turkish officials have declined to comment on the raid. But Ankara’s foreign ministry did release a fairly defensive statement afterwards, suggesting that feathers had been ruffled.

“Turkey’s firm attitude in the fight against the [Isis] terrorist organization and its contributions to the efforts of the international community in this area are well known,” the ministry said.

“As a member of the global coalition, Turkey plays an active role in the fight against [Isis] and the perverse mindset that it represents”.

Turkey has long been accused by its critics and enemies of harboring Isis members, and those detractors were quick to brandish al-Qurashi’s location as yet more evidence of this. It has put Turkey in a tricky position.

“Joe Bloggs is going to read about the proximity [of the house] to Turkey and assume that Turkey was guilty of incompetence or hiding an Isis leader,” said Charles Lister, director of the Syria program at the Middle East Institute, a think tank in Washington.

“But when you dig into the context and location and different issues, then the situation gets a lot murkier. Any discussion of actual complicity is far less certain.”

History does not help. In the years leading up to and after the creation of Isis’s “caliphate”, Turkey failed to secure its own border into Syria, enabling thousands of foreign fighters to cross over to join jihadist groups. “In that sense, [Turkey] was instrumental in the emergence of Isis,” said Elizabeth Tsurkov, non-resident fellow at New Lines Institute, also a US think tank.

But, she adds, beyond that, the accusations of complicity are really part of efforts to discredit Turkey and to present Idlib as a kind of jihadist safe haven, which is not accurate.

Turkey has arrested thousands of Isis members within the country in recent years. It also launched a military operation against the group in northern Syria in 2016.

And Atmeh is a little different.

As the Syrian war has dragged, this area has become almost entirely populated by internationally displaced people, making it a very effective place to hide.

Al-Qurashi apparently never left the house where he lived after moving there fairly recently. He reportedly relied on a courier, his deputy who lived one floor below him, for a connection to the outside world.

Mr Lister said it would be “harder than looking for a needle in a haystack”.

“Who would have suspected a man who arrived with his family in the most transitory area in all of Syria?,” he said. “In many ways, it is the perfect hiding spot.”

Atmeh is controlled not by Turkey but by HTS, which also faces accusations of incompetence.

Relations between HTS and Turkey are murky: Turkish military patrols often cross the border with HTS, serving as escorts as part of various ceasefire deals hammered out with the Syrian regime’s patron, Russia.

Turkey’s MIT intelligence service is known to have close contacts with HTS counterparts but there is little evidence that Ankara exercises control over the jihadist group.

Al-Golani’s organization amounts to a formidable and independent-minded political group, which in recent years has sought to rebrand itself as more moderate and the bitter rival of Isis, with whom it regularly fights.

HTS maintains a tight system of surveillance in the parts of Idlib province it controls. It has repeatedly cracked down on civil society activists who oppose its austere version of Islam through a system of informants.

And so a failure to have detected the presence of Isis’s leader on its territory would amount to a major security issue.

The Independent reached out to HTS but has yet to receive a reply.

No one also knows what – if any – part Turkey played in the operation to kill al-Qurashi.

But for now, the incident is clearly putting pressure on Ankara, which effectively negotiated the buffer zone in Syria it controls, on the understanding it would guarantee that all jihadist groups – including al-Qaeda breakaways and Isis – are rooted out.

The raid on another Isis leader in the northwest has played perfectly into their critics’ hands.

It may stoke further tension between Turkey and the US, already on opposing sides of the frontline in northeast Syria because of Washington’s support for the SDF, who are effectively at war with Ankara.

Only time will tell how things will unfold for Turkey.