Skip to content
Home News Dear Mr Putin, we need to talk about your war in Ukraine – Fleet Street Fox


Because the wheels have quite literally fallen off and you’re only one week in, says Fleet Street Fox

Vladimir Putin, who probably isn’t going to be called ‘sir’ for much longer (

Dear Vlad – can I call you Vlad? Who knows. It’s unlikely anyone has called you anything but ‘sir’ for two decades now.

While you have banned the Russian media from using the words “war” and “invasion” – a move which presumably you’d reverse quick-smart if anybody were to launch either against you – it doesn’t come into effect until tomorrow, and in any event, there’s something you ought to hear.

Your generals won’t tell you, because they fear a prison camp, and you’ve bombed the TV stations which might inform you.

How can I put this? The wheels have fallen off your war machine.

Well, all right, the wheels are still there. But the tires are shredded, or ripped off by the Ukrainian mud, and if the tires exit the wheels then the wheels, Vlad, don’t do too well on their own. At this moment, your cavalry is on foot.

You may blame this on Chinese tire suppliers, but these are the risks you run when buying military kit from international eBay sellers. Perhaps you’d also blame your generals, who have been telling you for the past 20 years that they were properly servicing your shiny mobile rocket launchers, and definitely not drinking vodka while selling the engine oil on the black market.

Either way, the little patches of red on maps about areas of Russian “control” are better described as areas of Russian illegal parking, surrounded by well-narked Ukrainian traffic wardens.

See the thing is, Vlad, if you rob a nation, the nation’ll see nothing wrong in robbing you. You have led by example, while forgetting the example you set is one of short-term selfishness, looting, and lies. And that’s why what’s unfolding in the Ukraine is like Hitler’s last days in the bunker, even though your war is only a week old.

Taking their phones away only works until they surrender, Vlad

The Ukranians say they’ve killed 9,000 of your side, with thousands more surrendered. You say 498 Russian troops have been killed, and only the mobile crematoria which shadow your soldiers on the battlefield know the truth.

But even by your own, let’s-not-count-the-children estimation, you’ve got more dead Russian solders in eight days than the UK lost during 20 years in Afghanistan.

Last night your troops shelled Europe’s biggest nuclear power station, starting a fire which, if it led to a reactor meltdown, would irradiate them first.

And while you’re merrily telling people that your “special military operation” is right on-track, your 40-mile convoy of artillery and tanks is about as mobile as a white-collar worker mid-lockdown. It hasn’t moved for 3 days.

At the same time, your police are arresting children and grandmothers. Way to go on the strongman PR there, Vlad. Why not drown some kittens while you’re at it? 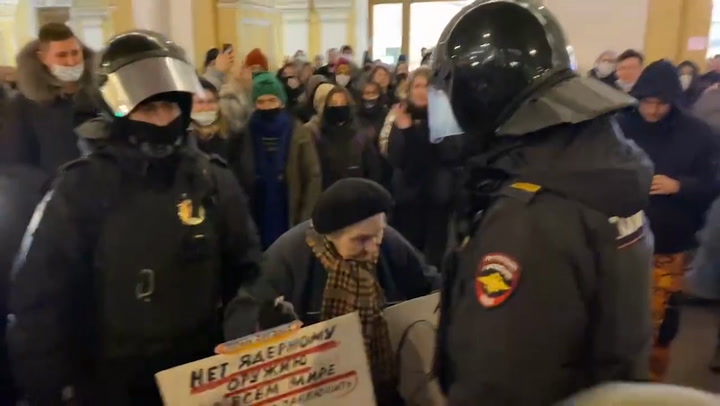 Your generals – those chaps who sit 50ft away from you at all times, which could be due to either your orders or their personal preference – are talking to the Americans more than you. They’re telling blacklisted Russian media: “This is f***ed up! They’re out of their f***ing minds!”

And there are enough people, of high enough rank, within your hardnut, murderously-ruthless security service, to save Ukrainian president Volodomyr Zelenskyy from assassination THREE times.

It’s probably not because they’ve suddenly discovered a conscience, Vlad. It’s because even embittered state torturers think your instructions are going to turn out to be unwise in the fairly-near future.

The keyboard warriors of Anonymous have taken down three Russian state news agencies, the space agency, and even hacked your personal yacht’s maritime tracking data to rename it ‘FCKPTN’, show it crashing into Snake Island, and log its ultimate destination as ‘hell’ .

You’ve been deplatformed by a waxwork museum. You’ve been blocked by the paralympics. You’ve even managed to provoke the Swedes, Europe’s calmest people, into sending your enemies anti-tank missiles.

In short, your military isn’t up to it, your intelligence services aren’t up for it, the special forces hit squads keep getting killed, some of the world’s worst people think you’ve gone a bit far, and teenagers are pwning your ass all over the internet.

Ukraine’s version of Glenn from the Thick Of It is proving unexpectedly inspirational, while all those people whose loyalty you thought you’d bought are turning against you. That’s the problem with buying loyalty, Vlad – if you have to pay them, then they’re not loyal.

“I demand to speak to customer service!”
(

The only thing that’s going in your favor is the speed at which the UK is sanctioning all the dirty money that flows through London, which is moving at a slower pace than continental drift.

Not really surprising, considering that after the Russia report our intelligence services were told not to look into how you influenced our elections, and a minister was pressured by No10 into dropping anti-money laundering measures.

So I’m afraid the only person on Planet Earth still on your side appears to be Boris Johnson, and even then it’s only for as long as it takes for potential Conservative donors to move their assets out of his jurisdiction.

And they’re not going to be calling you sir for much longer.