Catalonia celebrates this Wednesday a Day marked by the sentence of the ‘process‘, which is expected for the next few weeks, and the division between the independence movement on the answer to give to the ruling. The day started with the traditional floral offering to Casanova by the Government, which stopped the ceremony for a moment when the Spanish anthem was sounded from one of the balconies of a nearby hotel.

The Diada is thus the starting gun for the response of the independence movement to the Supreme Court ruling. The Government, JxCat and ERC are seeking a joint response to the sentence with the rest of the pro-independence actors, which for the moment have not reached a consensus, but all agree that the mobilization has to be key and the demonstrations of the Diada will serve to take the pulse of popular involvement.

The day began early in the morning, with the traditional offerings of institutions, parties (except Cs and PP) and various entities to the Rafael Casanova monument.

The president of the Generalitat, Quim Torra, and the rest of the members of his Government have opened the ceremony, which has been interrupted for a moment since someone has sounded the Spanish hymn chords from balcony of an adjacent hotel. 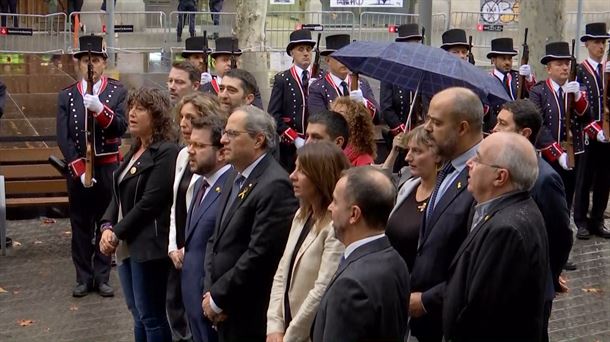 The Regional Minister of the Presidency, Meritxell Budó, has subsequently regretted this fact, which denotes, as she said, “lack of sensitivity and lack of respect for other sensitivities.”

“We are celebrating the National Day of Catalonia with an offering to Rafael Casanova and this incivility act, such as attempting a boycott with the Spanish anthem, seems to us uncivil and regrettable,” he denounced.

For his part, the president of the Parliament, Roger Torrent, has regretted that this year’s Diada is the second marked by political “exceptionality” due to the situation of the prisoners, but has trusted that it will be a peaceful, demanding and inclusive day . According to Torrent, the sentence of October 1 will open a political cycle in which he believes it will be necessary “to build large majorities, existing in the country, who say they do not want repression, who want a democratic society and share a republican agenda.”

In this edition, the Catalan National Assembly (ANC) has summoned the citizens to a meeting at 5:14 p.m. mass demonstration under the motto “Independence Goal “, While Òmnium has organized its own political event with the message “For rights and freedoms, absolution.” This is the first time in recent years that Òmnium has held a political event, which seeks to be “transversal”, which will take place on Paseo Lluís Companys in Barcelona starting at 11:00 am.

ANC, for its part, has summoned attendees at 4:00 p.m. in Plaza Espanya and in the adjacent streets. The Government has already announced that members of the Executive will attend the demonstration, as well as members of the parties that support it. Those who will not attend this call will be the representatives of Cs, PSC, PP, nor of the comuns; The latter specified that if any of its members attend the demonstration, they will do so “individually.”

On the other hand, the rain has disrupted the plans of the Generalitat and the Parliament, whose official act had to be held on Tuesday at 10:00 p.m. For this reason, the event, under the motto “Tornarem” will be held at the same time and in the same place on Wednesday; It will be chaired by Torra and the President of the Parliament, Roger Torrent, and will be attended by the Mayor of Barcelona, ​​Ada Colau.

Basque representation in the Diada

The PNV and EH Bildu will attend the events of the Diada in Barcelona and the Abertzale coalition will also participate in the demonstration called by the pro-independence organizations.

The president of the EBB, Andoni Ortuzar, and the Secretary of Organization Joseba Aurrekoetxea They will be part of the jeltzale delegation, who have been with the president of PDeCAT, David Bonvehí, and other leaders of this formation in the floral offering at the monument to Rafael Casanova. 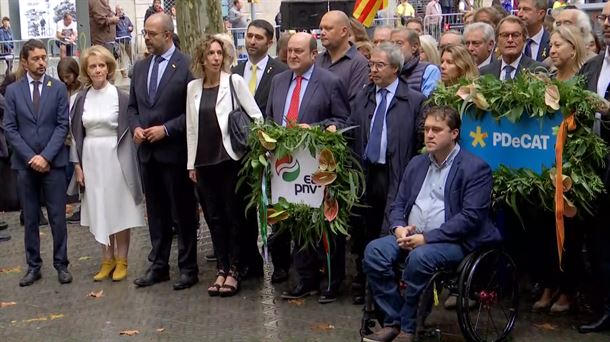 Ortuzar has demanded a judgment of the ‘procés’ trial that helps the “conflict between Catalonia and the State” be resolved in the “only valid way”, with dialogue, negotiation and agreement.

By EH Bildu the spokesperson attends Maddalen Iriarte, the deputy Mertxe Aizpurua and the MEP Pernando Barrena. In addition to the official acts, the delegation of the nationalist coalition will also participate in the evening demonstration called by the Catalan sovereignist organizations.

Video | EH Bildu has also participated in the floral offering 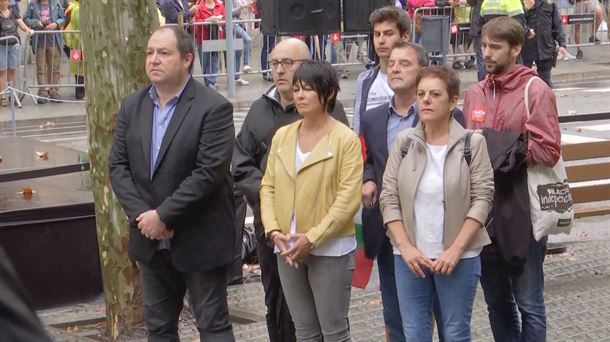 Iriarte He has affirmed that this year’s Diada is “special”, because there are elected leaders in prison and in “exile”, and has predicted that the sentence of the “procés” trial will be “very harsh”.

Iriarte has criticized that Spain is not “capable” of responding to a “territorial crisis like that of Catalonia” and has indicated that the Spanish Government will have “two options”: opt for the “democratic path” as the United Kingdom did with the Scottish referendum or the “undemocratic road”, which “turns its back on the citizenry.”

A delegation of In our hands He is also in Barcelona today. Precisely, the spokespersons of the platform have met this morning with the president of the Generalitat of Catalonia, Quim Torra. His spokesperson, Amalur Álvarez, has conveyed his solidarity and support, while they have analyzed the political situation in Catalonia and the Basque Country and the consequences that the next sentence on the “procés” may entail.

The sovereignist platform has stated that it is necessary that “the representatives of the Basque citizenship increase their efforts in jointly defending the fundamental rights, freedoms and sovereignty aspirations” of Catalonia and the Basque Country. 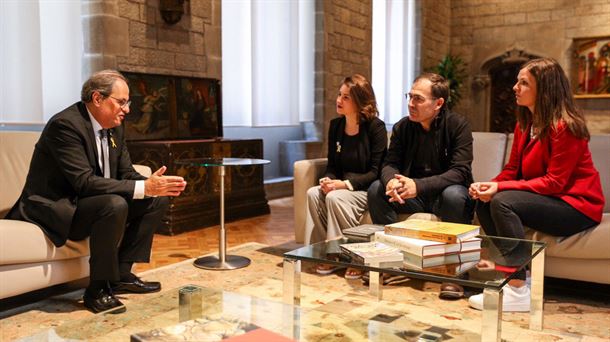