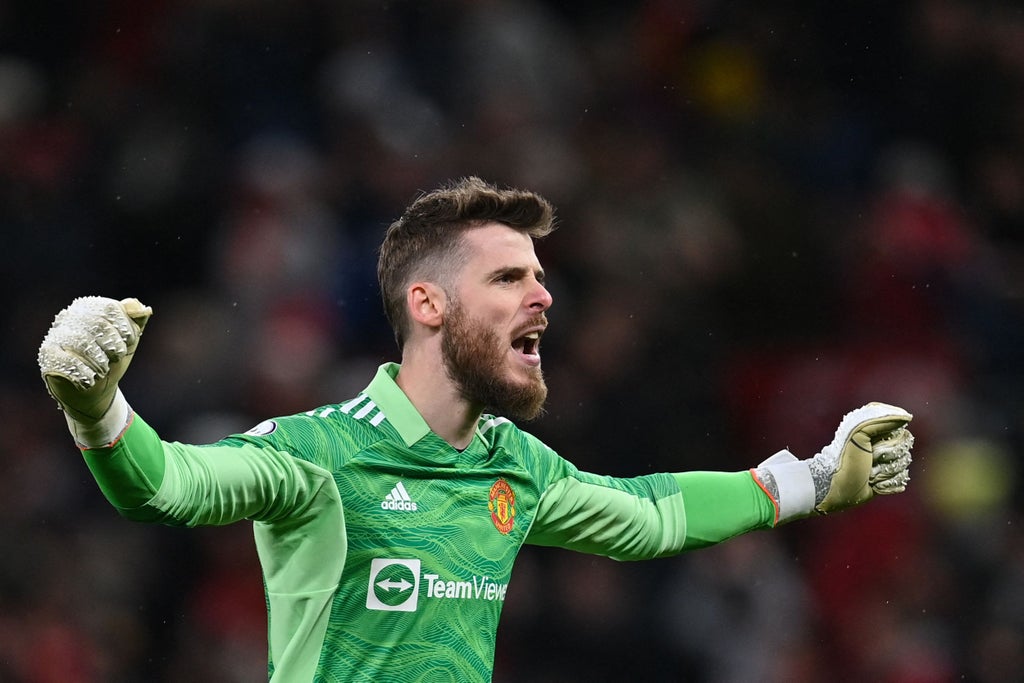 David De Gea knows all about Manchester United’s “massive rivalry” with Leeds United and is determined to cap his first Elland Road appearance with another key win in their Champions League qualification quest.

A standout performer in a disappointing season at Old Trafford, the 31-year-old is on course to win the club’s player of the year award for the fifth time since joining Atletico Madrid in 2011.

The in-form goalkeeper produced another superb display as United recovered from a shaky first-half display to beat Brighton 2-0 on Tuesday, moving them up to fourth in the Premier League ahead of this weekend’s eagerly anticipated trip to Leeds.

The long-serving Spain international has faced Marcelo Bielsa’s men twice at Old Trafford but has never played at Elland Road, having been an unused substitute in the Red Devils’ only two trips there since he joined the club.

“I know it’s a massive rivalry between the teams,” De Gea told the PA news agency. “It’s going to be a tough game, especially away against Leeds: good team, difficult team, different team.

“But we have to win this game as well to be in the top four and hopefully we can go there and win.”

Such is the importance of the fixture that De Gea says he is not even thinking about next week’s meeting with former club Atletico in the Champions League.

“Yeah (it is a special match), but my mind at the moment is just about Leeds,” he said.

United’s mentality will be key at Leeds and in the weeks to come if they are to keep alive their hopes of winning this year’s Champions League and qualifying for the competition next term.

West Ham may have supplanted United in fourth by the time Sunday’s fixture comes around and the rest of the chasing pack – Arsenal, Wolves and Tottenham – have multiple games in hand on them.

“We should be fighting for more better things than we are doing at the moment,” De Gea said. “But it’s realistic that we are fighting for the top four. This is the objective. Finishing in the top four is very important for us.

“We will go game by game giving 100 per cent every game and try to as many games as we can. There’s many, like four or five teams, fighting for the same place.

“But yeah, at the end it’s more about us than about the other teams. Be focused on what we can do and what we can improve and show on the pitch.”

Key to those improvements will be United playing at their best for an entire match, with De Gea called upon to produce a world-class save to deny Brighton’s Jakub Moder as his team-mates floundered in the first half.

The understated goalkeeper acknowledged “it was very good save” and said “I’m here just to help the team”, but he also knows they need to cut out their Jekyll and Hyde displays under interim boss Ralf Rangnick.

“I think we need to be much more consistent,” De Gea said. “Not just play 45 minutes – the first 45 or just the second 45. We have to be consistent for 90 minutes and then it’s going to be easier to win games.

“This is what we are we’re doing now. We try to play the 90 minutes at the same level, same desire, and that’s what we have to improve. I think we were pressing more higher in the second half, more aggressive.

“We want to win the game more in the second half and we show it. We press high, we recover the ball much, much higher and we scored a goal.

“Then the red card for them because of the pressure we made so, yeah, I think that was the most important thing: press higher, more aggressive and desire. More desire.”

Moder could only applaud De Gea’s save as the Brighton midfielder took the positives from a promising team performance at Old Trafford, where captain Lewis Dunk’s sending-off made things difficult.

“My header was good but the save was even better,” the Poland international said. “I also hit the bar in the second half but I don’t really think about the missed chances, I know the goal is coming.

“We have improved a lot since I came to the club and are still improving. When I came we fought to stay in the league and now we are ninth and could do even better, that is certainly our ambition.

“We will recover and think about Burnley on Saturday. We have to stay focused and keep playing at this level.”

Monkeypox: What is monkeypox, what are the symptoms, and are there cases in Scotland?