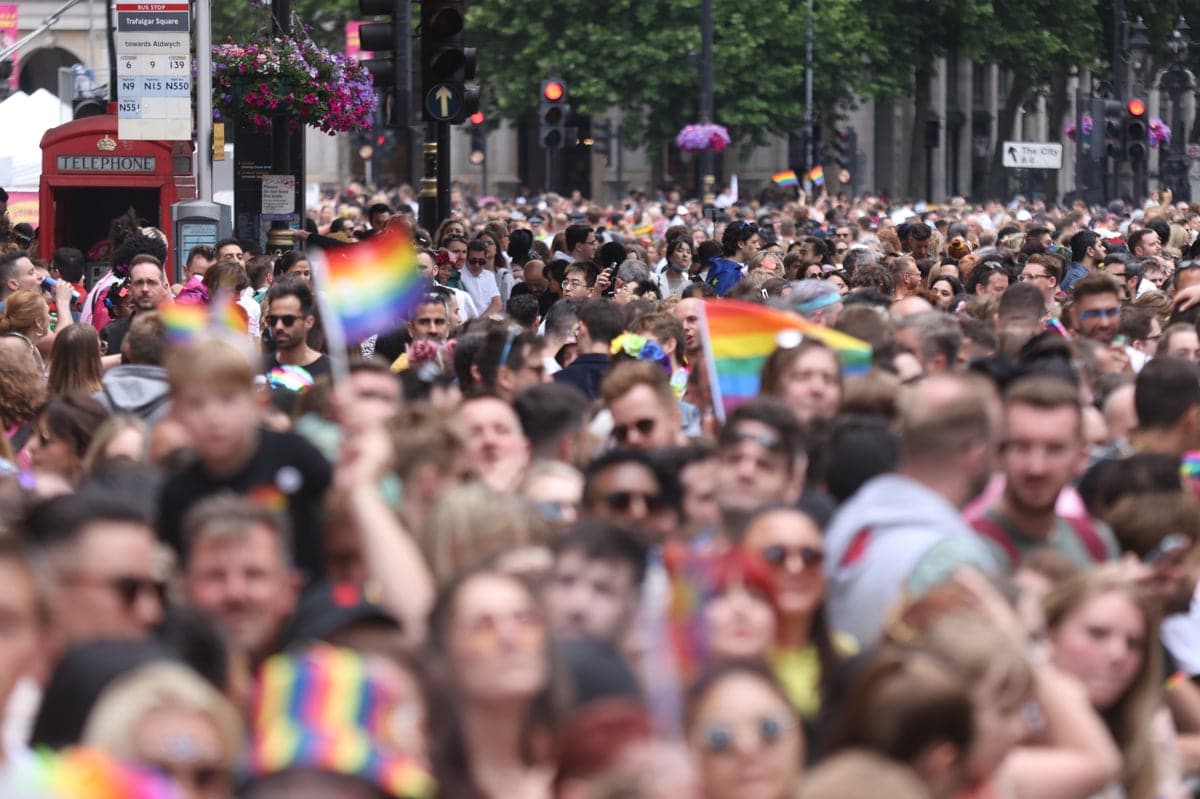 Olympian Dame Kelly Holmes and singer Emeli Sande are among those attending the 50th anniversary of the UK’s first Pride parade.

Crowds – which Sadiq Khan’s office said were made up of more than one million revellers – in rainbow colors and wearing face paint, glitter, jewels and sequins gathered on Saturday for what is also the first Pride in London since the outbreak of the pandemic.

Floats lined Park Lane ahead of the main march through the capital, which was led by Gay Liberation Front (GLF) activists holding placards saying “I was there in 1972” and that they are “still fighting” for global LGBT+ freedom.

Uniformed officers from the Metropolitan Police are not taking part in this year’s parade after the force acknowledged concerns from the LGBT community in the wake of inquests which concluded police failings “probably” contributed to the deaths of young men murdered by serial killer Stephen Port.

As part of what organizers are calling the “biggest and most inclusive event in history”, a line-up of artists are performing across four stages around central London.

Sande, who is among those on the entertainment bill, posted a story on her Instagram which showed her and her partner, classical pianist Yoana Karemova, on their way to soundcheck, and later in Trafalgar Square, where preparations were under way for the day’s musical extravagance.

Sande previously said she was driven to come out publicly by an urge to be “bold and honest” in everything she does, and that while she had been “nervous” about the decision, she also wanted to “shout from the rooftops and celebrate” their relationship.

Dame Kelly posted an image of herself online wearing a long multicolored outfit featuring a Pride flag with the hashtag “being me” – a nod to an ITV documentary she appeared in to tell her story.

Addressing the crowd in Trafalgar Square before introducing Sande, Dame Kelly vowed she would “never live behind that curtain again” after coming out as a gay woman.

This Morning presenter Phillip Schofield, who spoke in early 2020 about “coming to terms with the fact that I am gay”, walked alongside Dame Kelly during the parade.

This year’s parade, from Hyde Park Corner to Whitehall, paid homage to the original 1972 march.

More than 600 LGBT+ community groups were joining the march, which saw the route passing significant sites from the UK’s first LGBT+ movement.

Mohammed Nazir, 24, from Bangladesh, from campaign group Rainbows Across Borders, said he wanted to dedicate this year’s pride to those forced to still hide their sexuality.

He told the PA news agency: “Pride is about self-affirmation, dignity and equality. It is a way to meet some other LGBTQ people. Pride is a movement where we’re still fighting for our rights.”

Mr Khan said there was still a “danger” to the LGBT+ community of “discrimination, bias and violence”, and warned against being “complacent”.

He said: “This year is the 50th anniversary of Pride, celebrating this community, celebrating the progress made, but also continuing to campaign and never be complacent.”

London Gay Men’s Chorus, which was taking part in the march, described an assault on one of its members and his partner in the early hours of Saturday as a “terrible attack”.

A man was arrested by the Metropolitan Police on suspicion of causing grievous bodily harm in what the force said it was treating as a homophobic hate crime.

The choir said the attack “only serves to underline how important it remains to fight against homophobia and all forms of discrimination”.

Meanwhile, Pride participants told of their relief to be back out marching and celebrating after the pandemic.

Stephen Sanders said he “really missed Pride the last two years, obviously with Covid, so it’s good to be back celebrating the 50 years”, while Padraigin Ni Raghillig, who rode her Harley-Davidson at the front of the Pride parade as president of Dykes on Bikes London, said it felt “fantastic” to be back after lockdown.

Popstar Ava Max will close the show on the Trafalgar Square stage, while other performers include Eurovision-winner Netta, Samantha Mumba and Kat Graham.

All proceeds raised from commercial partnerships are reinvested into the LGBT+ community, such as through the Unity Fund which aims to build stronger communities by providing one-off grants to grassroots groups, organizers said.

Meanwhile, public health officials urged people not to attend Pride events if they have monkeypox symptoms or feel unwell.