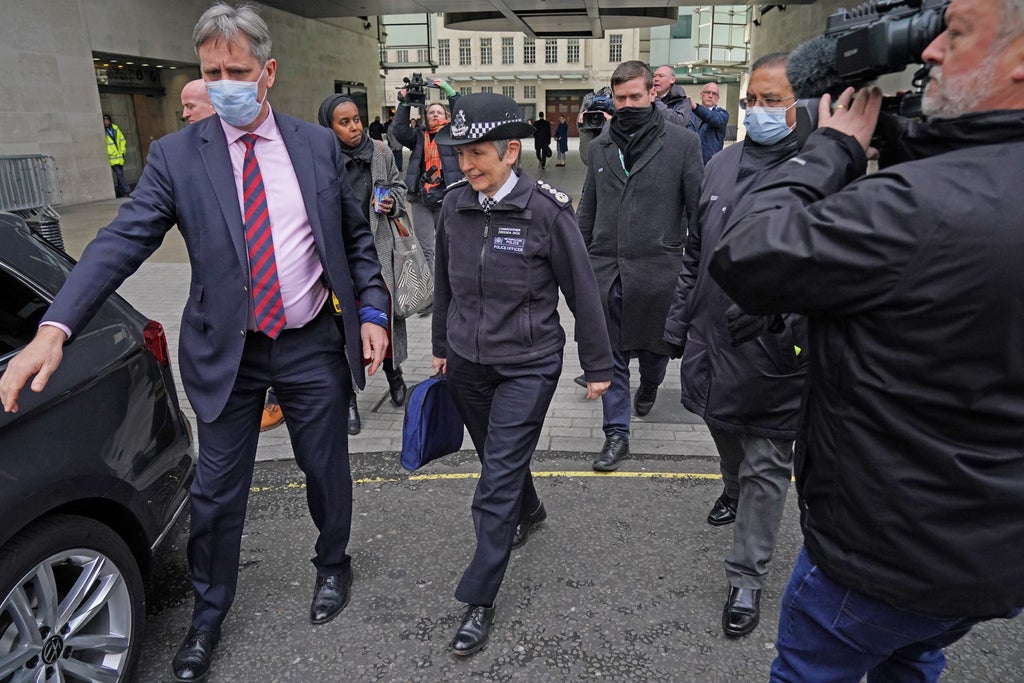 Dame Cressida Dick’s decision to resign as Commissioner of the Metropolitan Police comes after a tumultuous period for the force in which its culture and standards have repeatedly been called into question.

The resignation comes less than six months after her contract as the head of the UK’s largest police force was extended for two years, a role she described as being the “greatest honor and privilege of my life.”

The first female, and openly gay, commissioner has served more than 30 years in uniform.

Originally from Oxford, Dame Cressida was educated at the city’s university, graduating from Balliol College.

She joined the Met in 1983, where she served as a constable, sergeant and inspector in central south-west and south-east London.

In 1995 she transferred to Thames Valley Police as superintendent operations at Oxford, and subsequently spent three years as area commander.

After taking a career break to study for a Master’s degree in criminology at Cambridge University, she returned to the Met in June 2001.

Dame Cressida, who was the UK police lead for hostage negotiation, was appointed director of the force’s diversity directorate and head of the racial and violent crime taskforce before moving to the specialist crime directorate in 2003.

During her second stint at Scotland Yard she took on command roles in the police response to the 9/11 attacks and the Boxing Day tsunami in 2004.

She was thrust into the public eye in 2005 after she was in charge of the operation that led to the fatal shooting of Brazilian Jean Charles de Menezes who was wrongly identified as a potential suicide bomber.

A jury later cleared Dame Cressida of any blame in his death.

She was the national lead for counter-terrorism for three years, and also led the security operations for the Queen’s diamond jubilee and 2012 Olympics.

Her work also included leading the re-investigation into the murder of Stephen Lawrence and the police response to the killing of Lee Rigby.

After leaving Scotland Yard in January 2015 to become a director general at the Foreign Office, she returned as commissioner in 2017 and was made a dame in Theresa May’s resignation honors in 2019.

Speaking on BBC Radio 4’s Desert Island Discs that same year, she said her image was “a bit different” and described her sexuality as “one of the least interesting things” about her, adding: “I happen to love Helen, she’s my partner , on we go.”

Thought to have been well-liked among the rank and file officers, she has previously told how her colleagues are very amused that she cannot detect the smell of cannabis.

She stepped into the role of Commissioner in the aftermath of the Westminster terror attack, in which Pc Keith Palmer was stabbed to death as he carried out his duties on March 22, 2017.

But her tenure has become overshadowed by a wave of scandals.

During her term the Met has continued to face criticism about the relationship between police and black Londoners, although she has repeatedly denied the force is institutionally racist.

The force faced controversy and accusations of alleged racial profiling following a series of high-profile incidents filmed and shared online. However she has defended the use of stop and search powers to take hundreds of weapons a month off London’s streets.

She also had to oversee the fall-out from the disastrous Operation Midland, a multimillion-pound investigation which saw detectives duped by false claims of a VIP sex abuse ring made by fantasist Carl Beech.

Dame Cressida had been responsible for supervising the senior investigating officer who said allegations made by Beech, which were subsequently shown to be false, were “credible and true”.

In October 2019, she made a public apology for mistakes in the police investigations.

Two months later, she was referred to the Independent Office for Police Conduct (IOPC) but was later cleared.

The conduct of police officers at crime scenes has also come under intense scrutiny in the wake of the murders of sisters Bibaa Henry and Nicole Smallman in Wembley, north-west London, in June 2020.

Former Met constables Deniz Jaffer and Jamie Lewis were jailed for two years and nine months each last year for taking photographs of the sisters’ bodies and sharing them with friends and colleagues on WhatsApp.

In March, public confidence was shaken when one of the force’s armed officers Wayne Couzens kidnapped, raped and murdered marketing executive Sarah Everard, days after he had indecently exposed himself in a fast food restaurant – prompting a national debate about sexual violence, the safety of women and trust in the police.

The Met was heavily criticized for its handling of a vigil held in Miss Everard’s memory and for raising awareness of the dangers faced by women on the streets.

Months later the family of a private investigator who was killed with an ax 34 years ago said they were set to sue the Metropolitan Police over his unsolved murder.

Daniel Morgan died in the car park of The Golden Lion pub in Sydenham, south-east London, on March 10 1987, and a string of unsuccessful investigations into his death have been mired with claims of corruption.

In June an independent report accused the Met of institutional corruption over its handling of the case, saying it had concealed or denied failings to protect its reputation.

Over the summer, officers were then hit with criticism over the security of Wembley stadium during the final of the Euro 2020 championships, which saw thousands of ticketless fans storm the venue.

Dame Cressida later defended their actions, stating she “did not accept” that the policing operation failed.

In December, inquest jurors found that “fundamental failures” by the police were likely to have contributed to the deaths of three of serial killer Stephen Port’s victims.

Basic errors by a string of detectives left Port free to carry out a series of murders as well as drug and sexually assault more than a dozen other men in Barking, east London, between June 2014 and September 2015.

The force then came under scrutiny for its initial decision not to investigate allegations of lockdown-breaking parties at Downing Street – with some claiming it indicated and those in power were being shown preferential treatment.

The force has now contacted some 50 people over the claims and Dame Cressida Dick suggested some of those being contacted by officers will end up with ends.

Despite months of calls for her resignation from some critics and swirling speculation in recent days, amid the aftermath of the latest scandal to hit the Met surrounding the revelations that racist, misogynist and homophobic messages were exchanged by officers, the sudden announcement that she was stepping down on Thursday evenings will have come as a shock to some.

Earlier in the day she had insisted she was still the right person for the job as she fielded questions from listeners during a phone-in on BBC Radio London.

The series of disturbing messages exchanged by a group of officers, primarily based at Charing Cross police station, were published by the IOPC as part of an investigation into behavior in the team between 2016 and 2018.

Some 14 officers were investigated as a result, with two found to have a case to answer for gross misconduct.

One was sacked and another resigned before he would have been dismissed.

Another two had already left while in some of the other cases the IOPC found “no further action should be taken”.

When asked if she should step down amid outcry over the behaviour, she said: “I have absolutely no intention of going and I believe that I am and have been, actually for the last five years, leading a real transformation in the Met.

She told rogue officers to “get out now, otherwise we will find you” and said she was “seething angry about the whole thing” and there was “no place in the Met for sexism or racism or homophobia, for abuse of trust or for bullying”.

Mayor of London Sadiq Khan had said on Wednesday that his continued trust and confidence in Dame Cressida hinged on how she addressed the culture at the force and her plan to win back the trust of the public.

In a statement, Dame Cressida said: “It is with enormous sadness that following contact with the Mayor of London today, it is clear that the Mayor no longer has sufficient confidence in my leadership to continue.