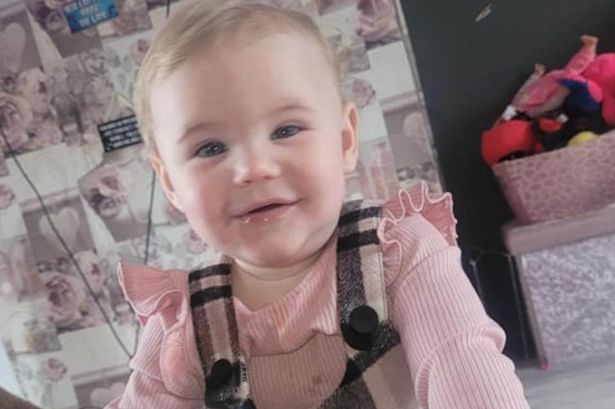 The devastating last message from a dad to his “little princess” before she was mauled to death by the family dog ​​has now been revealed.

Bella-Rae Birch, one, was attacked by the family’s pet dog and she later died of her horrific injuries in hospital on Monday evening (March 21).

The tot, from St Helens in Merseyside, was just 17 months old, having celebrated her first birthday last October.

In a final message that’s now so heartbreaking to think about, her dad Ryan wished her a happy birthday, not knowing at that point that it would be her last.

“Happy birthday to my little princess, big one today. First ever birthday!!” he wrote.

Neighbors rushed to help in the tragedy, which took place yesterday afternoon
(

“My Bella boo. Have the best day gorgeous we love you too much,” his message continued.

Bella-Rae’s family have paid tribute to their “blue-eyed baby girl” who was “much loved”, and they are now trying to raise money for the cost of her funeral.

The little one’s mum, Treysharn, said: “On March 21, we sadly lost our gorgeous blue-eyed baby girl, who was just one year of age, in a tragic sudden accident.

“We are now in a position where we need to raise funds towards the most beautiful send-off.”

Police said the dog who attacked Bella-Rae only joined the family a week ago.

It is believed the dog was a Staffordshire Bull Terrier or Pitbull Terrier.

Neighbors rushed to help in the tragedy, which took place yesterday afternoon, as one local person gave the tot CPR before the emergency services arrived.

Emergency services rushed to the scene in Blackbrook, St Helens on Monday to find Bella-Rae with severe injuries after the dog attack.

She was rushed to hospital but tragically died of her injuries later.

Bella-Rae’s family have now spoken out in tribute: “As a family, we would like to thank the community for their support.

“We would ask that we are now allowed some space and time to try and come to terms with the tragic loss of our much-loved Bella-Rae.

“She will be sadly missed but never forgotten.”

Police said the dog was immediately seized by officers and humanely killed after the attack.

An investigation has also been launched to locate the previous owner of the dog.

Police are looking at whether the dog was actually an illegal breed under the Dangerous Dogs Act (1991).

Neighbor Jordan, who is hoping to go to university in September to train to be a paramedic, ran over to help when she heard screams.

“I heard them screaming for help and I ran over. The parents were hysterical.

“I’ve lived here for eight years but I’ve never spoken to them before.”

Jordan, who lives on a nearby road to the road from the family, said the baby’s “devastated” mother Treysharn Bates was “crying hysterically” outside the house moments after yesterday’s horror attack.

Neighbors said that the family of four had lived at the house for around three years, but had only recently purchased the dog.

One woman described the animal as “stocky” adding that she thought it was a Pitbull or Staffy.

Another neighbour, who only wanted to provide his first name, David, said: “There were absolutely loads of police officers, there must have been about 20 police cars and ambulances.

“The square was absolutely swarming with them, I’ve never seen so many police in my life.

Emergency services rushed to the scene in Blackbrook, St Helens on Monday to find Bella-Rae with severe injuries after the dog attack
(

“I was just in shock when I heard a baby had been attacked by a dog. I believe the dog was tranquilized in the house with a dart gun.”

Other neighbors reported seeing the animal brought out with a metal collar and rod by police officers.

Another neighbor who did not want to be named saw the “horrific” attack unfold.

He described the family as “lovely” and said the parents endowed on their “beautiful” daughter.

He said: “They are absolutely devoted to their kids, they do everything with them, they’re always together.

“It’s horrific. I can’t even speak about it.”

Jordan, who helped to try and save the little girl has even had to provide CCTV of the horrific incident.

After re-watching the scene on her CCTV, she said she had “realized” the trauma of the evening.

She added: “Everybody was in shock.”

The town’s Labor MP Conor McGinn said: “The close-knit community in Blackbrook and across St Helens are in deep shock after yesterday’s tragedy.

“Our thoughts and prayers are with the little girl’s family, who are devastated. I know everyone locally will respect their request for privacy as they grieve.”

Speaking this morning, Superintendant Steve Brizell said: “We were called by the family of a 17-month-old girl Bella-Rae Birch, Bella Rae has lost her life in the most unimaginably terrible circumstances and our thoughts are first and foremost with the family and the wider community at this time.

“Our specialist family liaison officers are providing the family of Bella-Rae with support and officers will remain in the area in the coming days to provide further support and reassurance for the wider community.”

Detective Inspector Lisa Milligan said yesterday: “This is a tragic incident and our thoughts are with the child’s family at this devastating time.

“The little girl’s parents and wider family are absolutely devastated and our specialist Family Liaison Officers are providing them with support at this horrendous time.

“While we are in the very early stages of the investigation into this extremely tragic incident we can confirm that the dog was only bought by the family a week ago and officers are working to identify the previous owners of the dog concerned and establish its history.

“Our officers will remain on Bidston Avenue this evening and in the coming days to provide reassurance to the local community and we will work tirelessly to establish the full circumstances.

“If you were in the Bidston Avenue area this afternoon and witnessed anything, or have any information about the dog in question then please come forward speak to one of our officers.

“Our officers take the issue of dangerous dogs very seriously. Over the past years we have worked proactively with the five local authorities in Merseyside to ensure prohibited dogs are taken off the streets.“

Alternatively, you can call the independent charity @CrimestoppersUK anonymously, on 0800 555 111. You can also use their online form here.

You can donate to Bella-Rae’s fundraiser here.