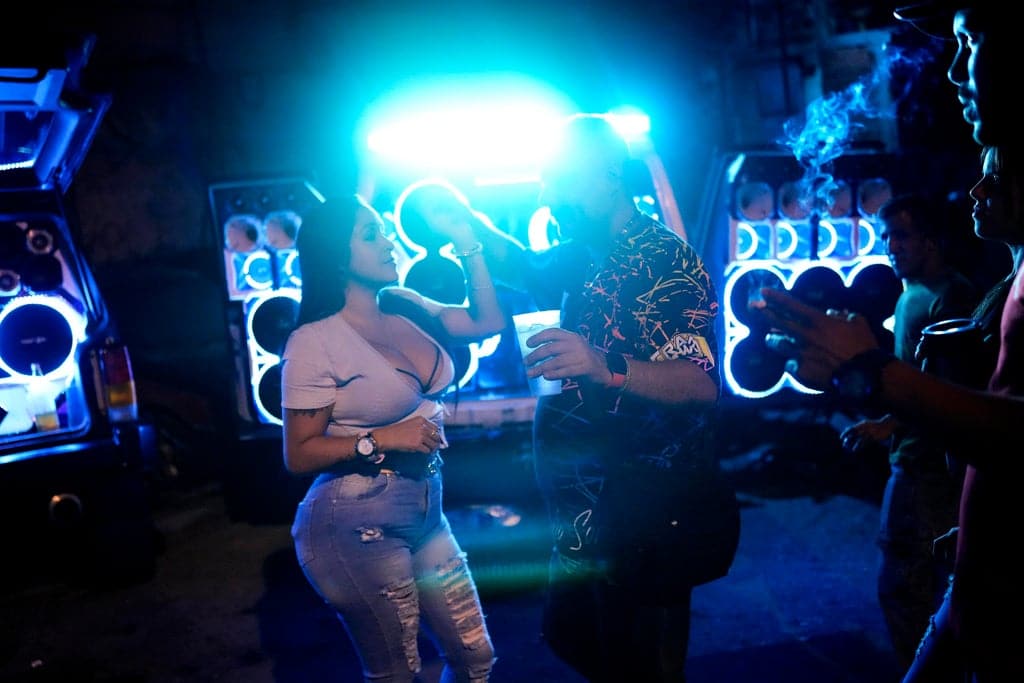 Dozens of people dance rhythmically, almost shoulder to shoulder, in a neighborhood in the outskirts of Venezuela’s capital, transforming a narrow street into a mini dance festival. It’s near midnight, and when “Do It To It” of TikTok fame starts playing, gradually getting louder, adolescents, adults and a few children crowd the sloping street, blocking it to traffic and ignoring the stench from an abandoned dump truck nearby.

The heart of this party — music so loud it can make the body vibrate — comes from speakers installed in the trunks of cars and sport utility vehicles lined up to battle for the most powerful sound system. The mobile party, which includes electronic, vallenato, bachata and other rhythms, allows young and old to have fun in areas where nightclubs are long gone or cost prohibitive.

“You have to feel it, you have to experience it… With car audio, you close your eyes and rise,” said car owner Luis Daniel “El Leon” Castro. “It is something indescribable.”

The trunk of Castro’s four-door Hyundai Getz has loudspeakers, amplifiers, bass bins and a space solely meant to show off: He can throw his shirt in there and have the fabric bounce to the beat. The lid is so heavy that five people had to push up together to open it.

The cars began to gather after dark in Petare, one of the biggest shantytowns in Latin America. For a time, cars, motorcycles and even some public buses managed to squeeze by, forcing partygoers to move on and off the street. But people overran the road as the clock neared midnight.

Car audio culture, as expensive as it can be, is regaining strength in Venezuela as the country’s economy continues to morph. Millions of people have fallen into poverty during the nation’s deep political, social and economic crisis, but US dollars are flowing more freely than in pre-pandemic days, and those — a lot of those — are needed to turn a vehicle into music powerhouse.

Ahead of Venezuela’s annual party-filled, pre-Ash-Wednesday carnivals, workers at Carlos Arocha’s shop were busy measuring, sanding, cutting and painting custom pieces for SUVs to get them ready for rave ups on Caribbean beaches. Work on a vehicle can take a month and easily top $10,000, more than the car itself.

“In Venezuela, there has always been that hobby of spending money on vehicles. I don’t know why it is something that has been instilled in us for years,” Arocha said. “People figure out what to do to place the sound (system). There are people who do not even own a house.”

Arocha, who has been in business for 13 years, said some shops have gone under during the crisis.

On the same night that Castro and his friends were partying in Petare, a group of college students were celebrating their graduation in a nearby neighborhood with a few other speaker-filled cars parked under an overpass. About 50 people danced between the cars beside the road’s median barrier.

Some boys would get close to the vehicles’ speakers, giggle, and as their eyes widened, point to a few features.

People in this area of ​​Caracas know well the everyday struggle of working at multiple jobs while depending on money sent from relatives abroad to make ends meet. But they also know how to dance away their worries, if only for a few hours.

“I see it as a party, something very good, and not only that, but something that everyone likes despite the situation,” 18-year-old student Luis Mediavilla said as salsa played. “Here one enjoys, lives and relishes, as they say. Everything they do is very good… It’s about fun, madness, competition. It’s something really good.”

He said the car audio battles let people have fun without having to venture into the city to a club or spend $30 dollars on a bottle of rum that in the neighborhood costs $10.

In the past, car owners and authorities have ended up in a cat-and-mouse dynamic, but no one interrupted the battle Mediavilla was enjoying. While the noise bothers some neighbors, business owners see more customers for malt drinks, liquor, food and cigarettes.

Erly Ruiz, sociology professor at the Central University of Venezuela, said car audio culture gives participants a sense of belonging. Signs at the doors of nightclubs might exclude some, but the mobile parties are open to anyone.

The parties let people claim a territory Ruiz said. “I stop my car on a street and the only thing that is going to hinder it is going to be the surrounding buildings, the surrounding houses… Then I put on my music and suddenly I can be without a shirt… without a jacket, meaning without all these rules that usually don’t let me party the way I want, completely on the street.”

See also  PIP provides up to £152 each week to more than 128,300 people with respiratory conditions