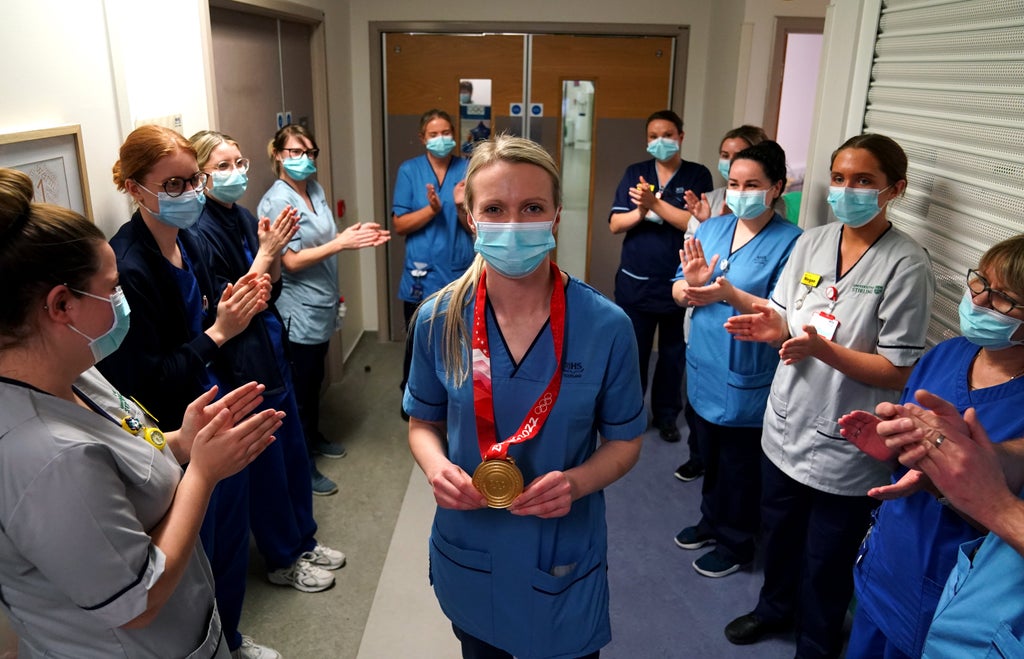 Team GB Olympic gold medalist Vicky Wright received a hero’s welcome as she returned to her job as a nurse after clinching the top prize in women’s curling.

Cheers of “what an achievement” and “we are so proud” rang throughout Ward B11 at Forth Valley Hospital in Larbert in the Falkirk Council area, where the 28-year-old has worked for the last seven years.

The ward was dressed in flowers, bunting and balloons, and even had his own makeshift curling rink, which Wright took to immediately and scored a bullseye each time.

The Scots athlete and her fellow women’s curling team players Eve Muirhead (captain), Hailey Duff, Jen Dodds and Mili Smith arrived back in Scotland just a week ago after they crushed Japan 10-3 at the Beijing Winter Olympics this year.

Speaking to the PA news agency about her return to the hospital on Tuesday, Ms Wright said: “It’s good to be back. It was an amazing welcome. Everyone was lined up in the corridor clapping me in.”

She said the moment she made eye contact with the ward’s senior staff nurse Lisa McCann, “the tears started to come”.

Wright, who lives in Stirling, reduced her hours at the hospital to focus on the Winter Olympics and played a key role as vice-skip on Muirhead’s team, which ended up securing Britain’s only gold medal at this year’s Games.

“I wouldn’t have my gold medal around my neck if it wasn’t for all my colleagues,” she said. “They have supported me so well and this medal is as much as theirs as mine.”

Wright described the last two years working as a nurse during the pandemic while continuing her curling as “an emotional rollercoaster.”

“I don’t think anyone in the NHS has been able to summarize the effect Covid-19 has had on us,” she said. “It definitely will be a lasting effect.

“But I think the Olympics have really boosted morale in B11, they have been so proud. Everyone has been talking about it and they were so uplifted this morning to see me come back in.

“It’s something good to talk about, something positive. They have seen me go through it all and been a part of the journey, and to be able to celebrate the gold medal with me is just brilliant.”

Speaking about the moment she was handed her gold medal, Wright said: “It was a mix of emotions.

“I was really happy, I was totally overcome, I burst into tears. It makes you realize all your hard work, blood, sweat and tears have finally paid off, and you’ve achieved your dream.

“I still can’t quite put into words what it means yet, but it’s something special. I don’t think it will settle in for a while.”

Ms McCann said the ward’s staff were desperate to try on Wright’s medal when the Olympic athlete walked through the door for the first time since she left to compete in the Winter Games.

“She’s certainly done us proud,” Ms McCann said. “I only had two hours’ sleep the night she got the gold as myself and five other staff linked up through FaceTime to watch the final live.

“We were all crying when we saw her being presented with her medal. It was just great.”

Mary Telford, a patient in the ward, spoke to the PA news agency about Wright’s return.

“I wondered what all the commotion was at first, then it clicked, she’s (Wright) coming in,” she winked.

Ms Telford said being treated by Wright is “a once-in-a-lifetime thing” and described her Olympic success as “absolutely brilliant”.

Cathie Cowan, NHS Forth Valley’s chief executive, described Wright as not only an incredible sportswoman, but also a very caring and dedicated nurse.

“Vicky has worked incredibly hard to achieve her goals and has successfully managed to combine her curling training with her work as a nurse – a job which is demanding at the best of times and even more so over the last two years.

“She is a tremendous role model for both the sporting and nursing professions, and we are incredibly proud of everything she has achieved.”