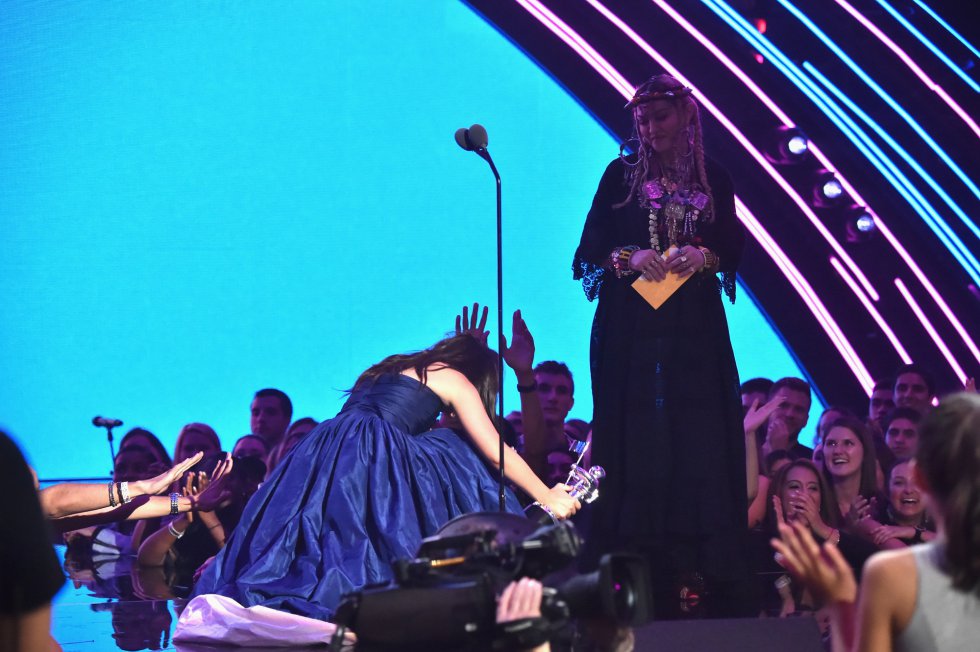 On March 3, 1989, the promotional video for Madonna’s well-known song premiered on MTV. Like a Prayer. In it, an attractive, scantily clad Madonna saves a young African American unjustly detained and transmuted into a sort of saint or Christ; burning Ku Klux Klan crosses, interior of a church with gospel songs, liturgical phrases, stigmata and kiss of the black saint/christ. Faced with the massive success of the song, extolled by the world of music and by the public, the Catholic Church and conservative Christian groups launched a fierce attack, John Paul II banned it in the Vatican and encouraged a campaign against it. Faced with the boycott of the companies that were advertised, Pepsi Cola finally abandoned sponsorship of the tour.

Thirty years later, at the Aretha Franklin tribute at the MTV Awards, Madonna appears in Berber attire, multiple necklaces and bracelets, blonde braids, and speaks for 10 minutes comparing her background and problems to Aretha’s. This time the criticism she receives from her is, fundamentally, for her desire to be the leading role, but –and this is what is relevant– also for having adopted a racialized aesthetic that does not belong to her, due to “cultural appropriation”. If in the first case it is religious conservatives who attack her while atheist and multicultural leftists celebrate her, this time she will be the left woke up who vilifies her.

The example is brought to mind by Caroline Fourest in her book Offended generation. From the cultural police to the thought policewhere he glosses the rise of criticism for cultural appropriation.

In the video of Like a Prayer, the racist story, with a gospel background and a black prisoner/saint/christ, was not understood as cultural appropriation of a white singer, but as a transgressive critique of racism with a multicultural rereading and daring staging of christian symbols. Thirty years later, the same artist’s use of ethnic attire is considered intolerable. The braiding of the hair in white women also represents an offense. Not just Madonna; Likewise, the singer Katy Perry had to apologize for having posted on Instagram a photo of her with blonde braids, whose color, in addition to cultural appropriation of African hairstyles, highlighted “her privileges as a white woman.”

Currently, in the US, costume parties, birthday parties, celebrations with food from some country, businesses that sell products that are not indigenous identity go through the sieve of cultural appropriation, are denounced, attacked, massacred on social networks and forced to apologize. It is enough for a person to feel that a piece of his identity has been torn away for North American society to be ready to ask for forgiveness. What is the exact measure of the defense of one’s own identity and what is the nonsense of the ghetto? If what is proper to each culture can only be legitimately used by those who belong to it, are we not denying what is specific to culture: communication, exchange, cosmopolitanism at last? If the uses, the outfits, the customs are non-transferable, with what reason will we criticize the imposition of the burqa or genital mutilation, as part of “their culture”? In a fair return to the origins, English should be banned in North America, and both the North and the South of the continent should only speak indigenous languages. And we, here in Spain, should we all put on our regional costumes to claim our authenticity? Nothing would remain of the culture itself: music, with its fusion of styles, should be banned; exotic cuisine restaurants would have to do without cooks who were not born in the country. As a Valencian myself, I would find myself in the position of denouncing all those who dare to make paellas outside the borders of Valencia. Hispanists would be fired from their posts for sticking their noses into a country that is not theirs. And even language learning would be viewed with caution. Put to it, to avoid contamination, the best thing would be for each population not to leave its territory, from institutions to preserve cultural identity measures would be arbitrated to return all populations to their place of origin. This dystopian vision is nothing but the logical conclusion of the postulates of the fight against cultural appropriation. Is there a difference between the purity of cultural identity and racial purity? Between the denial of cultural appropriation and racism?

While the sexes are generally clear in the species, male and female, the races are a miscegenation gradient and the same happens to the cultures. We need to build our identities and stop all entryism that dissolves us. Those who do not belong to any of the identities that constitute us, to the community culture that defines us, cannot be their spokespersons or their leaders, but they can be accomplices, friends, scholars, disseminators…

After all, what attracts us in others is precisely the difference.

Rosa Maria Rodriguez Magda She is a philosopher and writer.