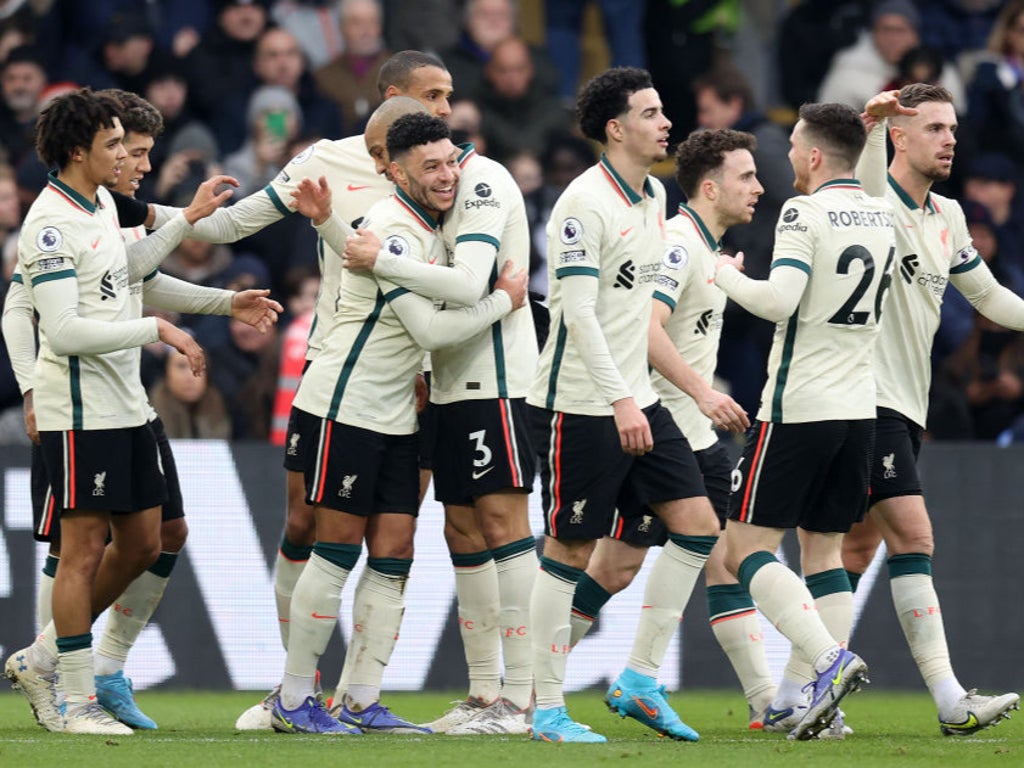 Liverpool moved to within nine points of Manchester City at the top of the Premier League table with an entertaining 3-1 win over Crystal Palace at Selhurst Park.

Virgil van Dijk gave the visitors the lead in the eighth minute, thumping a bullet header beyond Vicente Guaita from an Andy Robertson corner. And Liverpool’s dominance was rewarded with a second shortly after the half hour mark when Robertson crossed for Alex Oxlade-Chamberlain to bring down and fire home at the back post.

Palace finally got a foothold in the game towards the end of the first half and continued that urgency after the break. They eventually found the breakthrough 10 minutes into the second period when Jeffrey Schlupp’s pass found Jean-Philippe Mateta in behind and he rolled the ball across for Odsonne Edouard to slot into an empty net.

The hosts pushed for an equalizer but it was Liverpool who would score for a third time late on as Fabinho tucked away a penalty awarded to the Reds by VAR after a lengthy review after Diogo Jota was brought down by Guaita.

Here are five things we learned from the game.

Liverpool make it 10 in a row

For most football fans this fixture evokes memories of ‘Crystanbul’ when Liverpool spurned a three-goal lead to draw 3-3 with Palace – a result which all but ended their hopes of winning the Premier League title in 2014.

But in recent times the meetings between these two sides have only gone one way. Liverpool’s win today means they have now beaten Palace in each of their last 10 games against the South London outfit. That run includes a 7-0 win away at Selhurst Park last season.

Results like the 3-3 draw at Selhurst Park eight years ago are often ones which can scar teams when they return to the scene of the crime. That could not be any less true in this case.

Palace had won just two games in 10 Premier League matches coming into their clash with Liverpool. And Patrick Vieira may have been fearing the worst when the visitors raced into a 2-0 lead.

But the hosts showed a tremendous amount of character to fight back and make it a real game in the second half. They had more than enough opportunities to secure a draw or even win the match, but were thwarted on a number of occasions by Alisson.

The defeat means Palace drop to within nine points of the relegation zone. But they will have taken a great deal from their second half display against Liverpool. And with games against Norwich, Brentford and Burnley coming up in February, Vieira will be confident his side can begin to climb up the table once more.

Robertson’s brilliance can sometimes go a little unnoticed, predominantly because of the excellence of Trent Alexander-Arnold on the other flank. But, along with Alisson, the Scot was the star of today’s game. I have barely put a foot wrong.

His corner for the first goal was in the perfect area to allow Van Dijk to meet him with aplomb at the front post. And then his superb delivery for Oxlade-Chamberlain’s strike sliced ​​open Palace with consummate ease.

See also  Meat Loaf's wife remembers their love story: "The day I met him he became my world" | People

He also carried out his defensive duties solidly enough given he was tasked with keeping the superb Michael Olise quiet. Olise has been Palace’s best attacking outlet in recent weeks, so it was an all-round impressive performance from Robertson, even if Olise enjoyed some moments of success.

For the first weekend since October, Liverpool improved Manchester City’s result in the Premier League. It means Klopp’s men can move to within six points of the league leaders if they win their game in hand.

There are very few holes in their sides. But with City coming off the back of a 12-match winning streak, any sign of weakness could prove fatal in Liverpool’s pursuit of the defending champions.

And it was clear for all to see that Joel Matip’s chaotic display was not of the standard Liverpool come to expect. He gave the ball away in dangerous areas, looked shaky in possession, and often relied upon Van Dijk to bail him out of trouble. I have exposed the Dutchman for Palace’s goal, stepping up too far and allowing both strikers to run in behind.

It would be a shock not to see Ibrahima Konate come back in alongside Van Dijk after the winter break.

The first 35 minutes saw Liverpool produce some of the best football of their season. Despite missing Mohamed Salah and Sadio Mane, they created a host of chances to put the game beyond Palace. As it was, they only managed the two goals, but it seemed as if the game was only going one way.

Then suddenly towards the end of the half a few mistakes began creeping into the Liverpool back line as Palace enjoyed a period of success. And in the second half the hosts battered Liverpool as Klopp’s side tiredly hung on until a controversial penalty put the game to bed.

It is clear there is fatigue among the Liverpool players. The trip to Palace marked their ninth game in 31 days, so a fortnight off will be a great chance for batteries to be re-charged.