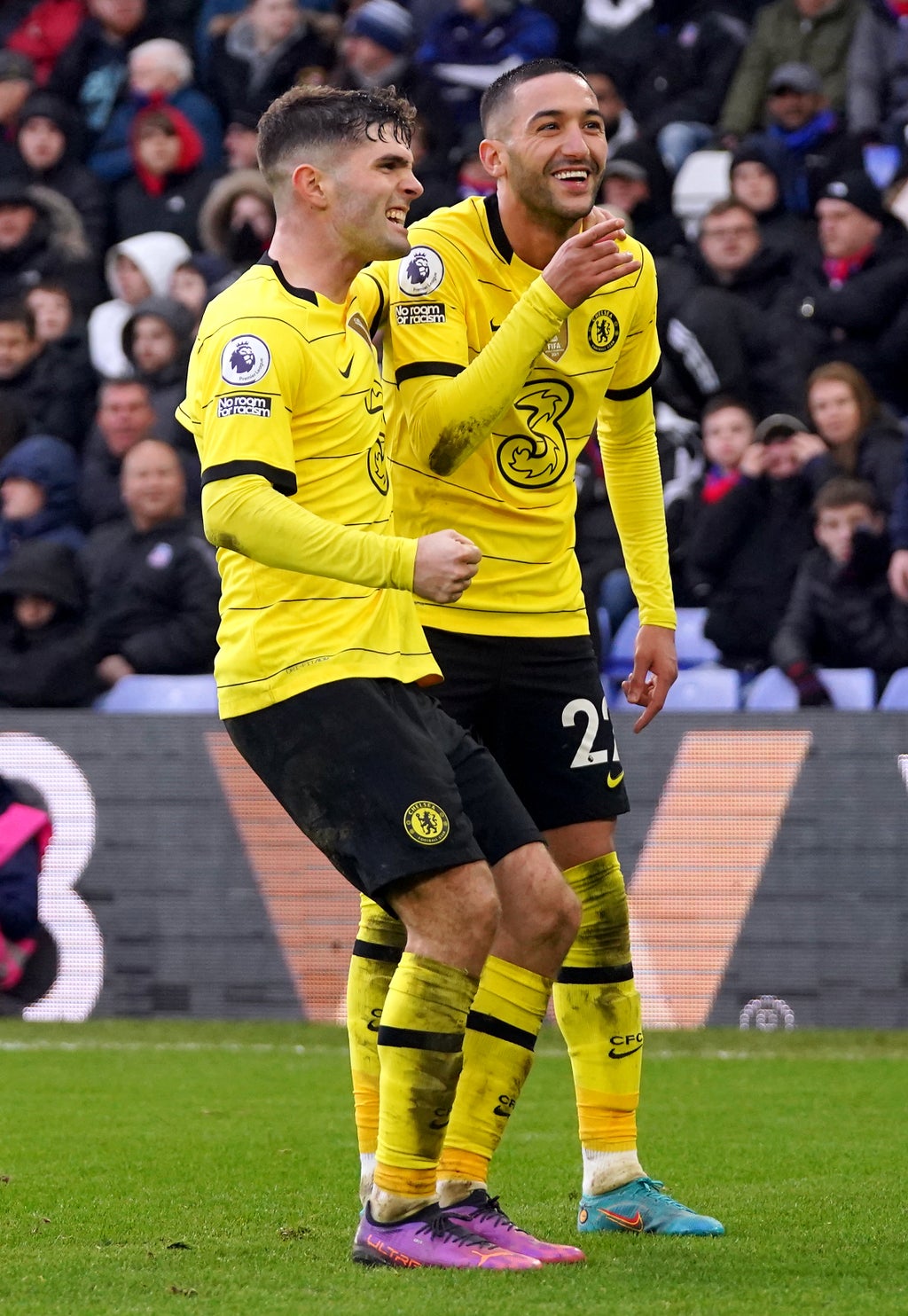 After being crowned world champions under the desert sun, Chelsea’s short trip through the storm to south London threatened to leave them drenched in reality. For 89 minutes, a fairly miserable performance was looked at in familiar problems as Thomas Tuchel’s attack toweled in vain and Romelu Lukaku’s presence wavered between inhibiting or anonymous. But just as the clock was about to bleed into the red of stoppage time, Hakim Ziyech’s deft volley at the far post rescued all three points for Chelsea and prevented them from being plunged deeper into a top-four battle.

It was hardly what Patrick Vieira’s side had deserved but there can be few cries of injustice. They might have taken the lead through Wilfried Zaha themselves in the first half and the winger almost snatched a dramatic equalizer too, but he was left crouched against the turf at Selhurst Park in despair at full-time amid what has become a pattern of Palace playing well but failing to reap any reward. They have now won just two of their last 14 league games and urgently need an added edge to arrest that momentum.

For Chelsea, three points will not disguise the difficulty they encounter here and the problems that remain close to the surface. They will at least hold back the chasing tide, though, with Chelsea now seven points clear of Manchester United, and allow the giddiness of a momentous week to go untainted, even if reality bit.

Storm Eunice might have subsided but it was clear from early on Palace had few inclinations to wilt. They were deprived of Conor Gallagher in midfield, who was unable to play against his parent club, but an early counter-attack sprung by Jeffrey Schlupp’s long ball almost bypassed that problem. Wilfried Zaha surged into space and picked out Michael Olise at the back post, only for his shot of him to fizz agonizingly wide of the far post.

It was a bright spark that amounted to more than a false dawn. Before long, Chelsea had established their regular foothold, with Christian Pulisic rewarded for his form of him in the Club World Cup and given license to roam behind a front three of Lukaku, Kai Havertz and Hakim Ziyech. They combined well in the tenth minute as the latter’s cross skipped off Lukaku’s head and fell to Pulisic at the back-post, but a slick bounce caused the American to skew a tricky chance wide.

For all the firepower at Chelsea’s disposal, though, this was another half where their attack lacked a little fluidity, while Malang Sarr and Andreas Christensen failed to offer a concerted threat as makeshift full-backs. Lukaku was a virtual bystander, completing just two passes all half, and Chelsea’s best attempt was in fact Antonio Rudiger’s blistering long-range shot, which swerved viciously towards the top corner and forced an excellent fingertip save from Vicente Guaita. And when Sarr did manage to set N’Golo Kante through on goal, the Frenchman’s shot arrowed straight into Guaita’s chest.

Instead, it was Palace who were left to rue not taking the lead. Olise, who was released by Chelsea as a 14-year-old, was a consistent thorn in his old club’s side and jinked into space on the brink of half-time. A pinpoint pass split open Chelsea’s defense but Zaha couldn’t guide the ball into the far corner from a tight angle. He wheeled away in disbelief but it gave Palace more belief and impetus after the break. Olise found an increasing amount of space and, although a stroke of finesse and clinical final ball eluded Palace, belief in an upset stirred as the wind tasted again.

For Chelsea, there was a deepening pattern of frustration. Lukaku aired his grievances in a scuffle with Joachim Andersen on the halfway line and Ziyech’s inviting free-kick didn’t so much as fail to clear the wall as faceplant straight into it. Perhaps, their toil was best illustrated by Kai Havertz, the hero in Abu Dhabi, who made a fine run past two defenders only to be left without any support and was promptly shunted into the wet turf, where he remained with the sort of desperate expression of a man who’d just had a car douse him with a roadside puddle.

When Chelsea thought they finally had their breakthrough, it arrived courtesy of one of Lukaku’s few memorable contributions. He spun on the turn and fired a powerful shot that was beaten away by Jack Butland, who’d replaced the injured Guaita. The rebound fell kindly to Ziyech and as he raced to the corner to celebrate, Lukaku turned to the Palace fans and shushed them. The silence was short lived. He was ruled offside in the build-up after a VAR check and Selhurst Park erupted with promise.

But with just a minute remaining, it was extinguished again and this time there would be no reprieve. Marcos Alonso was introduced off the bench by Tuchel and it was his cross from him that sailed over Palace’s three centre-backs and was volleyed in deftly at the back post by Ziyech. It was a bitter blow for Palace but, for Chelsea, a vital one that ensured three points from a performance that barely deserved them.