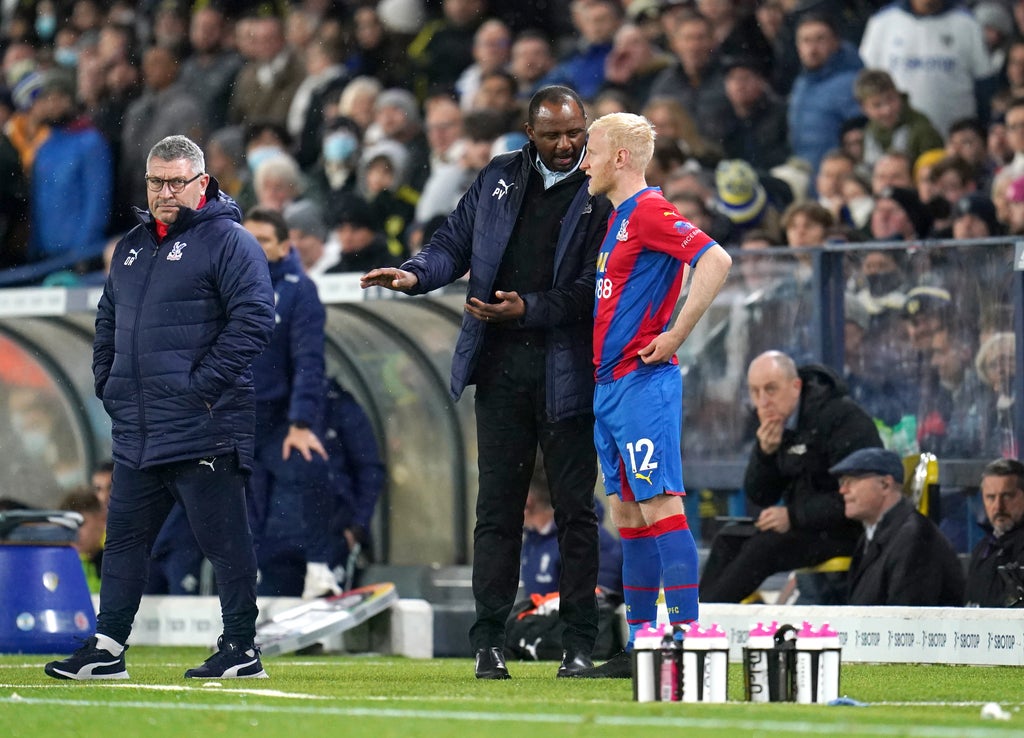 Will Hughes believes he has already learned a lot from Crystal Palace manager Patrick Vieira and talked up the club’s chances of enjoying a good run in the FA Cup this season.

The midfielder signed for the Eagles at the end of August and while he had to wait three months before being handed a debut, he has since established himself as a regular.

Hughes was only 10 when Vieira brought his trophy-laden spell with Arsenal to an end but acknowledged there is an “aura” around the 45-year-old who has taken his first steps into Premier League management at Selhurst Park.

“I’ve learned a lot, even more so in that midfield position,” the former Derby youngster said ahead of Saturday’s fourth-round tie with Hartlepool

“Look at the career he’s had, he has won almost everything, so any little snippets I can get from him, I can and he is more than happy to let the players in his office to ask anything that you need. That has been a big help.

“He’s cool and calculated, but if he needs to tell you to do something, he won’t hesitate to do it, so he has got that aura about him. He has got that respect that just comes naturally. It has been a pleasure working under him.”

A multitude of factors were behind Hughes failing to make an appearance for Palace until being introduced late on at Leeds in November.

The ex-Watford ace missed the majority of pre-season after being frozen out by his old club and also suffered a back injury early into his tenure with the south Londoners but has started the last eight matches in all competitions.

He added: “I am absolutely loving it. I have settled in straight away, although I wasn’t playing at the start of the season.

“There were a few reasons behind that. I didn’t have a pre-season, got injured and first and foremost the lads did an unbelievable job on the pitch. There was no way that I could have argued my case to the manager because of how well we were playing. I couldn’t really complain.

“I just had to be patient and bide my time… but the lads are brilliant, the club is brilliant and the fans are too. It’s been fantastic so far – long may it continue.”

During a short period of time Hughes has endeared himself to the Palace faithful and been a remarkable presence when celebrating goals at rivals Millwall and Brighton last month.

“When you’re scoring goals against them, it’s always nice to wind up the opposition fans,” Hughes said with a smile.

A hard-fought 2-1 win over Millwall in the last round set up Saturday’s meeting with fourth tier Hartlepool, who are set to bring close to 5,000 supporters to the capital.

Hughes is not taking anything for granted and would love to return to Wembley after making the final with Watford in 2019.

“The manager has reiterated how important it is for us to go as far as we can in this competition,” the 26-year-old insisted.

“It’s not lost its magic for me, especially when you’re growing up, the FA Cup is one of the major competitions that you want to win and want to be apart of so to play in it is special.

“Previously I got to the FA Cup Final, albeit got beat 6-0 (by Manchester City), but it’s a magical cup.”

Saturday will be the first time Hughes has faced Hartlepool after he was injured when former side Derby took on Pools in 2016.

The future of the Rams remains uncertain with liquidation a real threat for a club who gave the current Palace midfielder his first chance in football.

Hughes admitted: “It’s not been nice and I don’t think it’s been nice for football fans in general to see.

“If you take rivalry aside, you wouldn’t wish it on your worst rival because that’s part of football and that’s what fans love.

“You want to see your rivals struggle in terms of league position and losing games, but never to cease to exist.

“I have seen a real sense of the football community come together in support of Derby so hopefully they can get out of this trouble they’re in.”