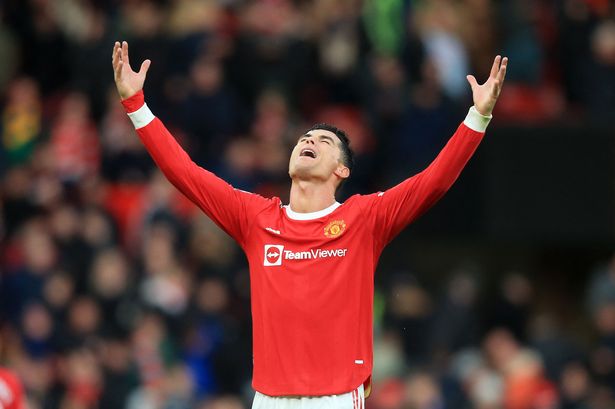 With 83 minutes on the clock, Aaron Wan-Bissaka received the ball and wanted rid of it as soon as possible. Paul Pogba was free and Wan-Bissaka somehow overhit it to a Watford player. The pressure had told.

Wan-Bissaka had enjoyed a proactive hour and then time caught up with him. This season has found out plenty of Manchester United players and Wan-Bissaka is one of them.

United are still fourth but in every other sense they are Europa League standard. Supporters booed at full-time, not out of dissatisfaction with the performance but the meek mentality of the players. Whoever ends May in fourth will have done so by default. Those who miss out might be closer to the bottom than the top.

Cristiano Ronaldo stood alone at full-time, disconsolate and downbeat. He struck the post in the fourth minute and from then on the only way was down. He looked shot long before the final shrill.

This one was on the players. Ralf Rangnick cannot be held accountable for their wastefulness. His selections of him, some arguably frivolous, were vindicated through vibrant play that was lacking the elusive goal. United had never played more recognisably in Rangnick’s image.

Watford were so bad they were worse than Leeds and Middlesbrough, as far as visiting teams at Old Trafford go this campaign. They were the most obliging opponents United could have possibly encountered and somehow they have ended the season unbeaten against them.

Nothing is a gimme for a United side that plays like it knows it is fourth-best at best. That place is in jeopardy, with Arsenal adept at dismissing the league’s fodder and Antonio Conte capable of extracting spirited wins from Tottenham’s underachievers.

United fans resorted to politely applauding Tom Cleverley’s substitution in the 80th minute, if only to maintain the positive atmosphere. Their threshold snapped at full-time, their mood not helped by the referee’s pathetic patrolling of Ben Foster’s time-wasting. Only three attempts out of 22 found the target of Foster’s goal.

Ronaldo hit the post, Anthony Elanga blazed a volley over, Bruno Fernandes hit Foster in a one-on-one and Ronaldo with a goalbound strike before miscuing a presentable volley. When Ronaldo put the ball in the net he was offside. That was in the first-half alone.

It was all too familiar for a crowd subjected to enough dominance and profligate halves in February already. United’s latest dominant half ended without a goal and it was apposite February ended as it started – with a demoralizing draw.

The second-half started with Pogba neither crossing nor shooting on the volley when unmarked close to goal. Emmanuel Dennis, the scourge of United in the reverse fixture, soon started threatening and the crowd’s optimistic tone was tempered. Watford could have won it in the final seconds.

The United supporters were lifted through Elanga’s run, Fred’s probing pass and a phenomenal flick from Pogba, Elanga wings fired wide. Marcus Rashford and Jadon Sancho warmed up as soon as the match restarted and the latter was called back before the hour for Fred, a move as logical as it was adventurous. Rashford could not arrest his dismal form of him.

In these numbing times, football offers escapism and a platform to express support beyond the pitch. It was Rangnick’s idea for the United and Watford players to pose with a sign with ‘peace’ written in six different languages ​​around the symbol against war. The crowd applauded a day after concerned United supporters contacted the club urging them to terminate their sponsorship with a Russian airline. On Friday, they did.

See also  EXPLAINER: What does Texas' data on abortions say about law?

United were unrecognizable from the disjointed team bulldozed by Watford in the first-half at Vicarage Road 14 weeks earlier. Their control and build-up play was supreme and their formation was impossible to discern, with Pogba’s roaming visibly vexed Roy Hodgson and his assistant Ray Lewington.

Hodgson’s body language was more upbeat as the half-hour mark approached, the septuagenarian clapping his players encouragingly. Hodgson has lost heavily at Old Trafford in the past but may struggle to recall any of his sides playing worse. Watford were shown mercy.

Fernandes and Fred started sniping at each other 22 minutes in. Two minutes later, Rangnick urged Telles to be patient after he launched a long ball for the daring Fernandes. Telles did not take his chance at the expense of the dropped Luke Shaw, also lethargic when he emerged. Elanga was agitated by a lateral pass. The United players were eventually and inevitably engulfed by frustration.

Ronaldo, as has been the case before this month, struggled to recover from an early miss and he was flagged offside as often as Filippo Inzaghi. He was entitled to feel aggrieved the referee Kevin Friend adjudged Hassane Kamara’s inside the area challenge to be valid. Had Edinson Cavani fancied it (and it wasn’t raining for once in Manchester), Rangnick might have introduced him for the cumbersome Ronaldo.

Only one in 10 cancer patients are offered non-invasive treatments