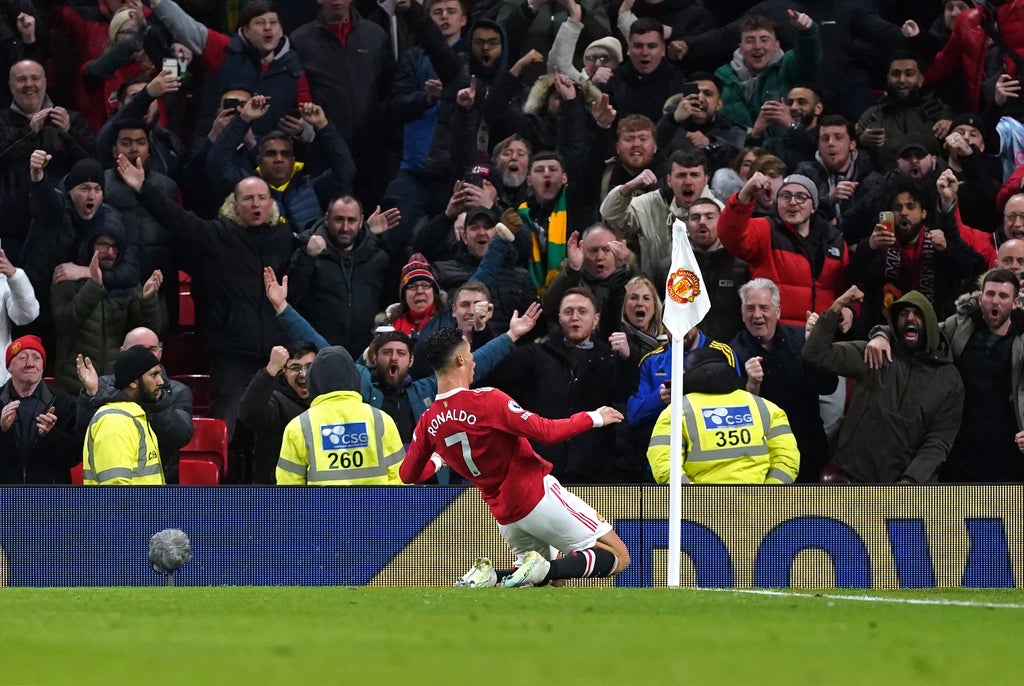 Having blown half-time leads to draw three straight matches in all competitions, the Red Devils desperately needed to put three points on the board at Old Trafford on Tuesday.

Brighton flew out of the blocks against the shaky hosts, who recovered from being jeered off at the break to seal a key victory as Ronaldo ended his six-game scoreless streak with a superb effort shortly after half-time.

Albion captain Lewis Dunk was sent off moments later before Bruno Fernandes scored in stoppage time to complete a 2-0 win that moved United up to fourth, albeit some sides below them have games in hand.

“Big win but we still have quite a few games to play,” interim manager Rangnick said.

“After three draws, two of them at home, this was a very important win and even so after the first half today.

“Today for a change we had a better second half than the first half and in the second half it paid off, we were more aggressive. We were primed to intercept and attack them in higher positions, so a highly important win for us.”

It was a reverse of recent matches, with Rangnick saying “we were Dr Jekyll in the first half” as they floundered against Graham Potter’s impressive side.

However, United managed to go into the break level, thanks in no small part to David De Gea, and Ronaldo’s exceptional finish gave them the foundations to build on.

“Energetically, he was on there, he was always trying to help the team-mates so I think in the last weeks definitely the best performance by him and a very, very important goal for us.”

It was a welcome shot in the arm for United ahead of this weekend’s trip to bitter rivals Leeds.

As for Brighton, their attention turns to Burnley’s visit after dreams of a first-ever win at Old Trafford were extinguished in frustrating fashion.

Asked if he felt that was a missed opportunity, Albion boss Potter said: “We do, that’s why we are disappointed. That’s our feeling.

“I think the boys felt that and even at 11 v 11 I still felt we could have got back into the game. OK, we’ve conceded a goal but I still felt it was there. But 10 v 11 makes it very, very difficult for us.

Potter was particularly irritated by Brighton captain Dunk’s red card. Initially shown yellow for bringing down Anthony Elanga, it was upgraded to a red after referee Peter Bankes was advised to check the pitchside monitor by video assistant referee Jarred Gillett.

“I thought it was a yellow card live,” Potter said. “(Adam) Webster was right there to cover. It’s not clear and obvious that he can’t get there, so I don’t understand the intervention. I don’t know what the stats are but it seems every time the referee goes to the monitor it seems it’s only going to go one way. That’s how it is.”