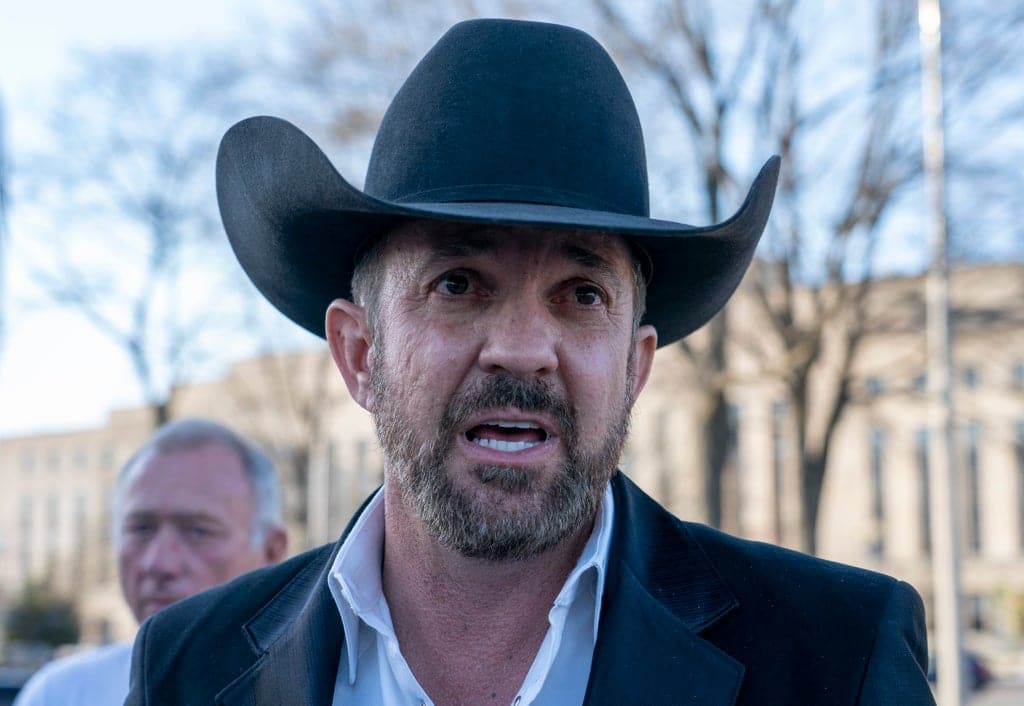 “Cowboys for Trump” founder Couy Griffin has been found guilty of a misdemeanour charge stemming from the January 6 capitol riot.

Footage presented in Judge Trevor McFadden’s courtroom showed Mr Griffen, an Otero County commissioner, climbing a bike ramp as he made his way towards the capitol. Mr Griffin faces up to a year in prison for trespassing on restricting capitol grounds, though Mr McFadden acquitted him on a separate charge of disorderly conduct.

Griffin is the second person to be convicted this year for their role in the capitol riot after a jury found Texas man Guy Wesley Reffitt guilty of storming the capitol with a holstered handgun and a slew of other felony charges earlier this month.

Griffin’s trial, which he opted to hold in front of a judge rather than a jury, was unusual in several ways. Unlike Reffitt and a number of the nearly 800 people charged with federal crimes in connection to the capitol riot, Griffin was not charged with entering the Capitol itself or behaving violently.

But he is also, at least for now, an elected official – one of the three members of the Otero County commission in southwest New Mexico. Service on the county commission has been one of the tamer acts of Griffin’s wide-ranging career, which has included rodeo riding, ownership of three failed barbeque restaurants, work as a pastor, and a stint as a Disney performer in Paris.

In recent years, Griffin has gained a following by promoting baseless right-wing conspiracy theories. He founded the political action committee Cowboys for Trump and struggled to come to grips with Mr Trump’s defeat in the 2020 presidential election, promising his fellow commissioners after the failure of the attempt to keep Congress from certifying the result of the election that he would return to Washington for Joe Biden’s inauguration armed with a revolver and a rifle.

Prosecutors referred to Griffin in a court filing as “an inflammatory provocateur and fabulist who engages in racist invective and propounds baseless conspiracy theories, including that Communist China stole the 2020 Presidential Election.”

Mr Griffin’s rhetoric in the aftermath of the Capitol riot was extremely violent. In addition to his threat to arrive armed to Mr Biden’s inauguration, he said that rioters could hold a Second Amendment rally at the Capitol, the result of which would “be blood running out of that building.”

Mr Griffin’s case was also unusual in that he brought a videographer with him to Washington to document his actions on January 6. Matthew Struck, whose video footage was used at trial, agreed to a deal with prosecutors for immunity in exchange for his testimony against Mr. Griffin.

Mr Griffin’s attorneys said that their client, who publicly floated the idea of ​​riding a horse to his trial but ultimately decided against the idea, was being unjustly targeted and that many other people at the Capitol on 6 January but did not engage in violent conduct have not been charged with crimes.

Those attorneys were allowed to cross-examine a Secret Service agent regarding the exact whereabouts of Vice President Mike Pence in an effort to prove that Mr Pence had departed the Capitol when Mr Griffin trespassed on the restricted area, which the prosecution held was immaterial.

Mr McFadden, a Trump appointee, decided after just two days of the bench trial that Griffin had in fact trespassed on restricted Capitol grounds.

Griffin is the second person convicted for their actions during the Capitol riot. Of the nearly 800 individuals charged with crimes, roughly a third have pleaded guilty – many to trespassing crimes similar to the one Mr Griffin has been convicted of – while the others are headed to trials in the coming year.