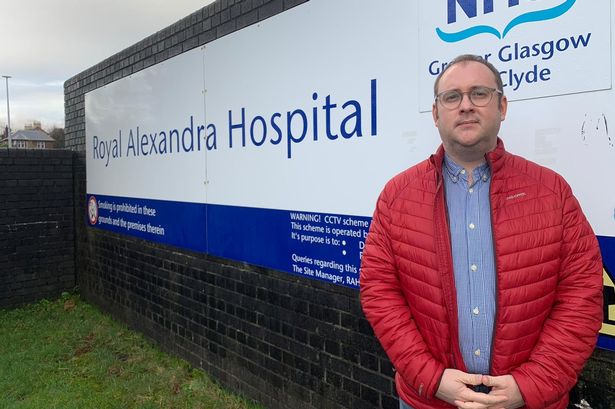 A row has broken out over pleas from NHS chiefs for residents to avoid the area’s A&E emergency department.

The politician said pleas to steer clear of emergency departments is leaving residents “between a rock and a hard place”, and pointed out that the under-pressure NHS 24 telephone service left 240,000 calls unanswered, figures show, between last September and January.

They blamed the current spike in Covid cases for the emergency order and asked anyone whose situation was not “urgent or life threatening” to seek help elsewhere, including from GPs or NHS24.

He told Holyrood that he believed ordering patients to use NHS 24 instead of A&E departments left them in a “precarious position, not knowing where to turn often in very serious situations”.

And he pressed Health Secretary on the Scottish Government’s plans to recruit more workers to shore up NHS24, as well as the perilous situation facing the NHS, saying: “It’s incredibly worrying that it was in August 2021 that NHSGG&C began to issue the A&E message and that now we find ourselves, for the third day in a row, in March 2022 receiving that same message not to attend unless we have a life threatening condition.

“For people to be told to not go to A&E in Inverclyde or in Paisley but to use NHS 24 instead is to those people that their health is between a rock and a hard place.”

The politician added: “We’re approaching a very unstable situation in which people just have no guarantee that they are going to be seen or at the very least listened to.

“The fact that we’ve been getting this A&E warning since the middle of last year demonstrates that the Scottish Government and the Health Secretary haven’t taken decisive action to resolve the crisis.”

And he told the Health Secretary: “NHS 24 must be significantly improved if it’s to be considered an acceptable alternative to attending A&E.

“Today the Health Secretary took it upon himself to reiterate that ‘we are in a pandemic’, indeed we are, but that can’t be the automatic excuse for failure, that must be the impetus to strengthen our NHS and ensure it can cope with pressure, do not tell patients to stay away.”

Cracks have been emerging at the Royal Alexandra Hospital for months after staffing shortages and the effects of the pandemic took their toll on the workforce.

We told last September how Paisley Gran Jeanette Carden described her experiences at the Corsebar Road hospital as worse than “the third world” when she waited more than eight hours in the back of an ambulance to be admitted to the facility, ending up as the lone female patient on a male ward.

Union leaders have been warning since last October of a “chronic” staff shortage and the RAH and reported the situation at the site was “dire” in December and staff were “on their knees”.

This week we told how the Royal Alexandra recorded its worst ever A&E performance since current records began in 2015, against Scottish Government four hour emergency treatment targets.

It was the second worst performer in Scotland – behind only fellow NHS Greater Glasgow and Clyde operated Queen Elizabeth University Hospital.

In a detailed statement to parliament on Thursday, Mr Yousaf told how: “This week the number of people in hospital with Covid-19 has reached the highest level since the start of the pandemic, which is having a significant impact on our health and social care services, especially in A&E.”

He added: “Our Health Board colleagues, those working on the front line, all tell us, that the last two weeks have been the toughest in the pandemic so far and the latest data shows some of the lowest performance against the four hour A&E target we have ever seen.

“This level of pressure impacts on patients and staff and I want to start, firstly by thanking our NHS and social care staff who we owe a huge debt of gratitude to and who are continuing to provide vital treatment and optimal patient care during some of the most challenging times.

“And also to patients, and those who have in any way been either inconvenienced or who are suffering because of the current pressures. I have no hesitation in apologizing for that suffering and for that inconvenience and I appreciate the patience that every person is showing at this extremely challenging time.”

He said a number of factors were piling on the pressures, including the numbers of Covid sufferers, the need for infection prevention and control measures and increased attendances at A&E.

The minister said workforce pressures are also being exacerbated by record levels of community transmission and patients were staying longer in hospitals – in part due to issues of bed blocking when care packages are not in place for discharge.

The highly-transmissible Omicron BA.2 variant is fueling community transmission and Renfrewshire has seen a steep rise in cases in recent weeks.

Mr Yousaf also defended the SNP administration’s record on the Scottish NHS, saying they have invested in growing the workforce by just under 10 per cent in the past two years, as well as ploughing in a record £300 million of new investment to help services deal with “system pressures”.

They are set to invest £11 million over the next five years on national and international recruitment drives and recruiting at least 200 registered nurses with a £4.5 million funding sum.

.Mr Yousaf also claimed Scotland is home to the best paid NHS staff in the UK and £12 million has been made available this year to support staff well-being.

There were 2322 Covid patients in Scottish hospitals on Thursday, he said, while the RAH reported 113 on Wednesday.