Skip to content
Home News Covid: Ómicron is the virus with the fastest spread in history | Science 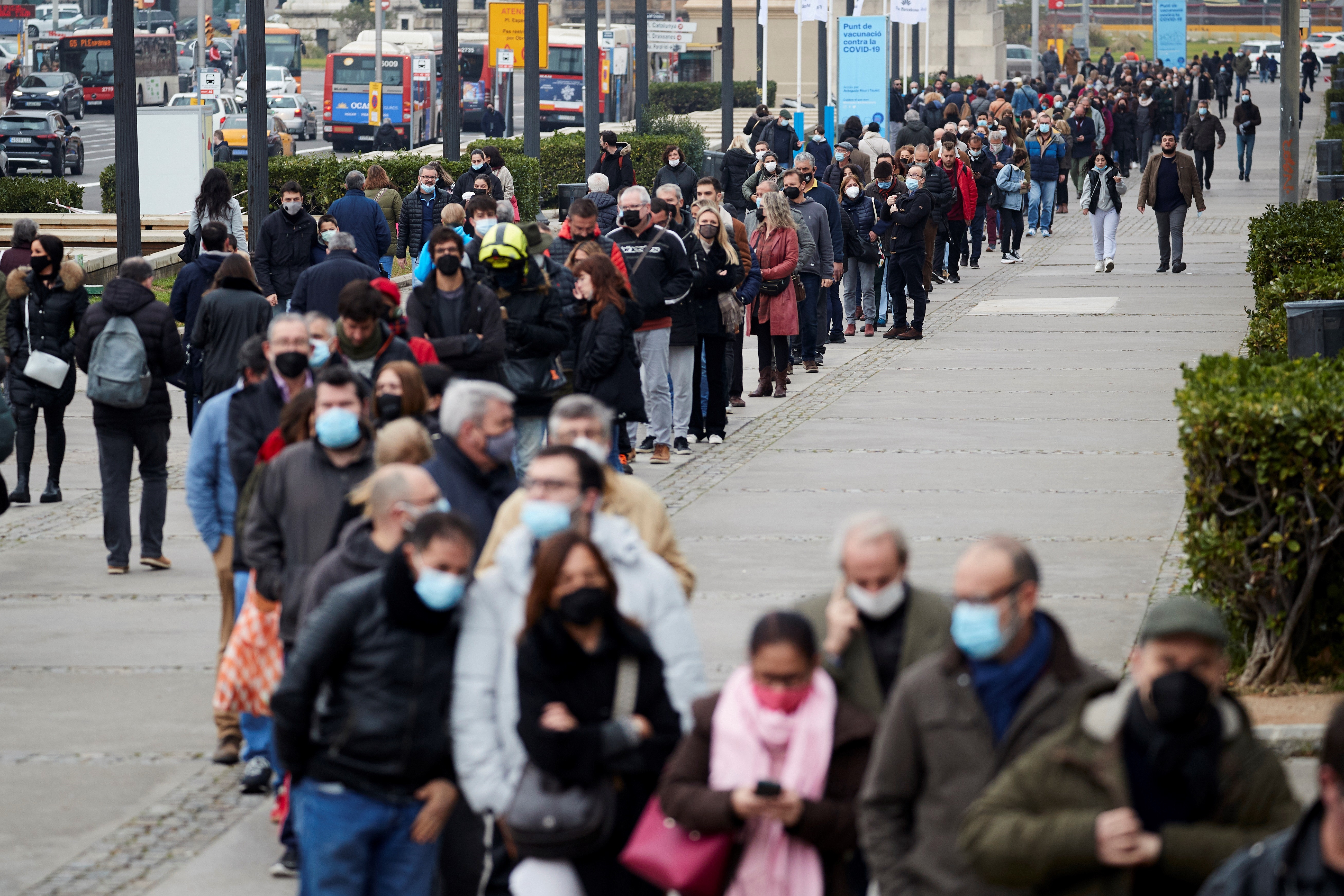 Omicron is the fastest-spreading known virus in history. It is unrivaled, according to Dr. Roby Bhattacharyya, an infectious disease expert at Massachusetts General Hospital (USA). Just a month after its detection in southern Africa, the new variant of the coronavirus was already dominant in countries around the world, with more cases than ever. “It is an incredibly fast spread,” says Bhattacharyya.

The researcher makes a napkin calculation to imagine what a race would be like between omicron and its most logical adversary, measles, one of the most contagious viruses. One person with measles infects another 15 on average in the absence of vaccination, compared to the 6 infected that Bhattacharyya assumes for omicron. The key, however, is in the so-called generation time: the days that elapse from when the first person is infective until those infected by it are also infective. About 12 days go by with measles. In the case of omicron, it only takes four or five days. It is explosive. “A case of measles would give rise to 15 cases within 12 days. A case of omicron would cause another six at four days, 36 cases at eight days and 216 at 12 days, ”summarizes Bhattacharyya.

In the real world beyond the napkin, the new variant of the coronavirus faces people who are already vaccinated or have passed the covid, so the doctor considers that each infected by the omicron infects only three other individuals, a figure similar to that of the original virus in the Chinese city of Wuhan, which encountered a planet without defenses and without containment measures. “Under current conditions, a simple exponential growth model would still show 14 million people infected in 60 days from a single case, compared to 760,000 with measles in a population without specific defenses,” warns Bhattacharyya.

Historian and physician Anton Erkoreka investigates past epidemics and declares himself astonished by the omicron. “It is the most explosive virus and the one with the fastest spread in history,” he says. Erkoreka, director of the Basque Museum for the History of Medicine, recalls that the black plague of the 14th century and the cholera of the 19th century – caused by bacteria – took years to spread throughout the world. The so-called Russian flu of 1889, perhaps caused by another coronavirus, took three months to cross the planet, like the original variant of SARS-CoV-2, detected in December 2019 in Wuhan and already ubiquitous in March 2020. “The variant omicron has broken its expansion record ”, ditch Erkoreka.

Epidemiologist William Hanage, co-director of the Center for Dynamics of Infectious Diseases at Harvard University, agrees with his colleagues. “The omicron is, without a doubt, the virus that spreads more rapidly among those that we have been able to investigate with this level of detail,” says the specialist, who also recalls supercontagative events. One of the best-studied outbreaks of the omicron, a party in Oslo with a guest recently arrived from South Africa, wiped out at least 81 of 117 participants infected with the variant.

The unprecedented spread of the omicron is clear, but there are still many doubts about the effect that this tsunami of cases will have on a humanity with high vaccination rates among the most vulnerable population. In Spain, almost 100% of those over 70 years of age are vaccinated. The omicron is capable of infecting immunized people, but the vaccines prevent serious disease, as confirmed on Thursday by a study led by the Dutch virologist Corine GeurtsvanKessel of the Erasmus University of Rotterdam. The individual risk is much lower now, but there are so many infections that daily admissions in Spanish ICUs are already half of those registered during the worst peak of the wave in January 2021, when practically no one was vaccinated.

William Hanage and Roby Bhattacharyya already published a document two weeks ago on the difficulty of finding out the true severity of the omicron. Bhattacharyya now highlights that the new variant is perhaps 25% less severe than delta – the dominant version so far, identified in India a year ago – in people who have not been vaccinated or covid previously, according to the Latest report from Imperial College London. “But probably the omicron is more serious than other previous variants. Alpha [detectada en el Reino Unido a finales de 2020], for example, it was 50% less severe than delta according to various studies. Given the speed with which it is spreading, the omicron will probably cause a lot of damage in a shorter period of time ”, warns Bhattacharyya.

There are already six preliminary studies that suggest that omicron has a greater facility to invade the upper respiratory tract, but a lesser capacity to infect the lungs, which would help explain its greater contagiousness and lower lethality. Virologist Michael Chan’s team at the University of Hong Kong was the first to calculate that omicron multiplies in the laboratory 70 times faster in human bronchi than the delta variant. However, the already dominant version of the coronavirus would be 10 times less efficient in the lung. Microbiologist Ravindra Gupta, from the University of Cambridge (United Kingdom), also showed on December 22 the alleged less interest of omicron in lung cells. And, this week, four other papers – led by virologists from the Universities of Leuven (Belgium), Such (Japan), Liverpool (UK) and Washington in St. Louis (USA) – reveal that omicron has more difficulty infecting the lungs of Syrian hamsters and genetically modified mice.

The epidemiologist William Hanage, however, is very cautious. The co-director of the Harvard center recalls that omicron seems much lighter because citizens have more defenses than in previous waves, thanks to vaccines or having been in contact with the virus before. “Many omicron infections, especially in vaccinated people, will be mild, comparable to a brief cold. The problem is that there will be other serious ones, which is why, as it is so communicable, the total number that will need medical attention will put the health system in trouble, both to deal with covid and for other issues, ”warns the epidemiologist. 40% of those hospitalized with omicron in London are not vaccinated, according to the British health authorities.

Aris Katzourakis, Virologist at the University of Oxford

Hanage mentions another tentative fact. “It appears that with omicron the length of hospital stay is generally shorter and that supplemental oxygen is less likely to be needed. But it must be emphasized that we have not yet seen many infections in the elderly ”, explains the researcher. In Spain, the accumulated incidence at 14 days is around 2,900 cases per 100,000 among twentysomethings, but at the moment it remains at 465 cases per 100,000 among octogenarians, although the figures are now soaring due to the greater exposure during the Christmas holidays.

Virologist Aris Katzourakis, from the University of Oxford (United Kingdom), also expresses his doubts. “I’m still not convinced that the omicron is inherently lighter than the original variant that emerged in Wuhan,” he acknowledges. “It appears to be lighter than the delta, but this is because the delta had evolved towards a greater gravity than its ancestor. Greater immunity seems the most logical explanation for the reduction in severity observed in the population, ”Katzourakis emphasizes.

A new preliminary study, published on December 27 by researchers at the University of KwaZulu-Natal (South Africa), suggests that omicron infection protects against the delta variant. The authors, however, have only investigated 13 people, mostly young and vaccinated, so it is too early to draw conclusions. The main person in charge of this work, the biologist Alex Sigal, has recognized that the supposed protective effect of the omicron not appreciated in the unvaccinated in their study, but their results have fueled the misconception that omicron causes a simple cold that will serve as a natural vaccine for the world, as Katzourakis warns. “I would love if people didn’t talk about the omicron as if it were a live attenuated vaccine. It is not. Get vaccinated, get the booster dose and take precautions to avoid infection ”, has alerted Katzourakis in his social reds.

Irish epidemiologist Michael Ryan, director of the WHO emergency program, insisted in his last press conference of the year on the uncertainty surrounding the omicron tsunami. “It is time to prepare, to have the health systems prepared. Even if the virus at the individual level turns out to be slightly less severe than previous variants, the large number of cases can put enormous pressure on healthcare systems, ”Ryan warned. “If the wave does not arrive, perfect, it will be good news.”