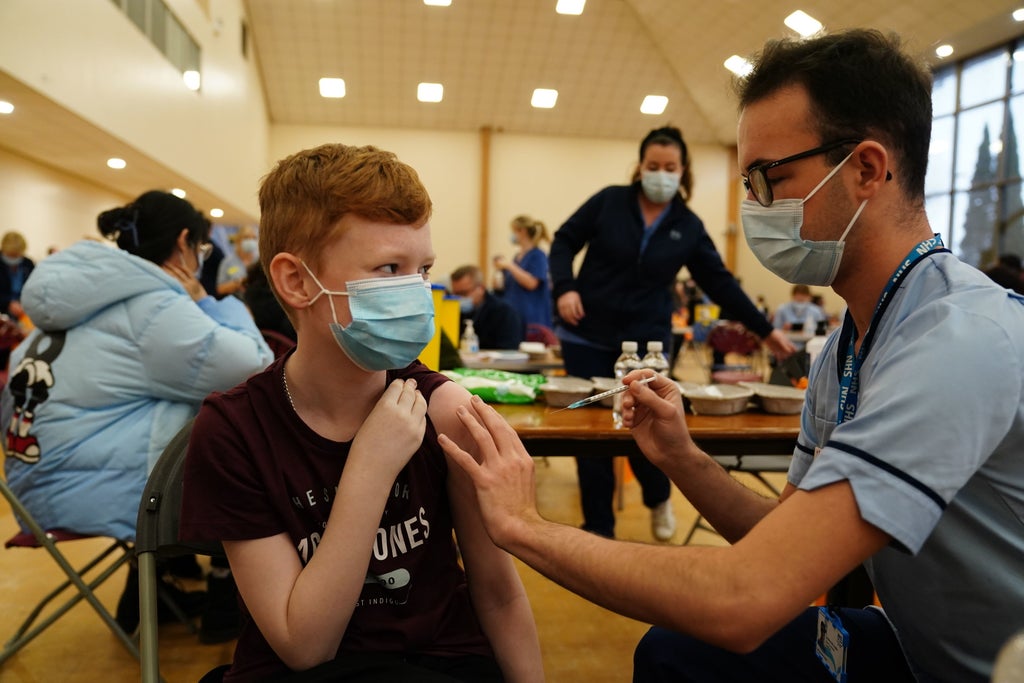 The drive to vaccinate children aged 5 to 11 has been delayed as ministers decide whether or not to accept the Joint Committee on Vaccination and Immunization (JCVI) recommendation to offer this age group the vaccine on a non-urgent basis.

Though the decision was made over a week ago, the government is reportedly in an impasse with the JCVI and Boris Johnson is expected to announce the decision on February 21, when he presents his Living with Covid plan to parliament.

Meanwhile, an NHS hospital in the east of England has declared a “major incident” after testing a drive for workers in hospitals treating Lassa fever cases to wear personal protective equipment (PPE) following the first Lassa-related death in the UK on Sunday

At least three cases have been reported this week in the UK so far, but the risk to public health from Lassa fever remains very low, the UK Health Security Agency said. Experts have said that Lassa virus is not transmitted via airborne infection, but through contact with bodily fluids of an infected person, unlike Covid.

The drive to vaccinate children aged 5 to 11 has been delayed as ministers decide whether or not to accept the Joint Committee on Vaccination and Immunization (JCVI) recommendation to offer this age group the vaccine on a non-urgent basis, Guardian reported.

Though the decision was made over a week ago, the government is reportedly in an impasse with the JCVI. Boris Johnson is expected to announce the decision on February 21, when he presents his Living with Covid plan to parliament.

A government spokesperson said: “No decisions have been made by ministers on the universal offer of a Covid-19 vaccine to all five- to 11-year-olds. We are committed to reviewing the JCVI’s advice as part of wider decision-making ahead of the publication of our long-term strategy for living with Covid-19.”

‘Fun’ activities used in half-term vaccination drive for 12 to 15-year-olds.

As part of the vaccination drive for the 12 to 15 age group, activities such as face painting, balloons, a petting zoo and a skatepark have been deployed to make the experience more fun for school children.

Since the vaccination rollout was expanded to include children late last year, the NHS has delivered more than 2.1 million vaccinations to people aged 12-15, including over 1.5 million first doses.

However, Dr Nikki Kanani, the deputy lead of the NHS vaccination programme, said that an estimated “more than two in five children in this age group” have not yet come forward.

Catherine Frew Brown, of GP Health Partners, which set up the vaccination drive, said: “We want the children to appreciate the experience and they may come back again without feeling anxious and fearful.

“It is very important that this age group is vaccinated because they are on their half-term holiday at the moment. They are going to be going back into school and will be mingling.

“We want them to be vaccinated so they are protected and safe while they are with members of their own family, some of whom may not yet have been vaccinated.”

Partially sighted people who undergo Covid-19 lateral flow tests in the UK will be able to get help from a new app and video-call service called ‘Be My Eyes’.

‘Be My Eyes’ will help connect people with low to moderate vision with agents from 119 through a live video call.

It will help make it easier for partially sighted people to use rapid tests in the comfort of their own home, said UKHSA chief executive Dame Jenny Harries.

Nearly a week after protests forced a key US-Canada border crossing to shut down, the Detroit International Bridge was reopened late on Sunday night even as demonstrations against Covid-19 vaccine mandates and safety protocols rocked Ottawa.

Officials from the Detroit International Bridge Co and the Canada Border Services confirmed that operations have been resumed.

This came after a larger protest erupted in Ottawa as residents demanded access to streets and lashed out at authorities.

At least 25 to 30 protesters have been arrested in Windsor, Ontario, police officials said. Several vehicles were also towed near the Ambassador Bridge linking Windsor with Canada’s automotive plants.

ICYMI: What are the symptoms of Lassa fever and is it contagious?

The rare Lassa fever has prompted authorities to keep a tab on new cases — first since 2009 — but what is this illness?

Caused by the Lassa virus, Lassa fever is a rat-borne illness contracted by a human contact with food or household items which have been contaminated by the urine or faeces of infected rats.

The virus, so far, is found in West African countries where it has been declared as an ‘endemic’. While it is limited to this region, it is consistently present and not wiped out completely among humans.

It is clubbed as a viral haemorrhagic disease, akin to Ebola virus disease, malaria, shigellosis, typhoid fever and yellow fever.

You can read more about Lassa fever here

An uplifting analysis by the Royal Bank of Scotland showed that business owners are the most confident they have been in six months as the country’s economy continued to rebound from Covid-19.

The Business Activity Index — for the eleventh month straight — has shown an expansion in monthly output, reaching 53.7 in January, up from 52.7 in December, the bank said.

Malcolm Buchanan, the chairman of the Scotland Board at the bank, said “growth picked up to a solid pace amid a further upturn in new orders”. Analysts said that any number above 50 shows expansion.

However, the growth was driven by services, even as manufacturing output dipped amid supply issues and weak demand continuing to weigh heavily on the sector, Mr Buchanan said.

A Bedfordshire resident who recently caught Lassa fever has been confirmed dead, officials said, as the total cases in England rose to three last week.

The person was initially placed under “investigation” for the acute viral illness, officials said, and confirmed the death on Friday.

The spread of Lassa is confined at the present as all cases identified so far have been traced to the same family.

Members of the family are linked to a recent travel to West Africa, the UK Health Security Agency said.

Welcome to The Independent’s live blog on the Covid-19 pandemic and Lassa fever for Monday, 14 February.