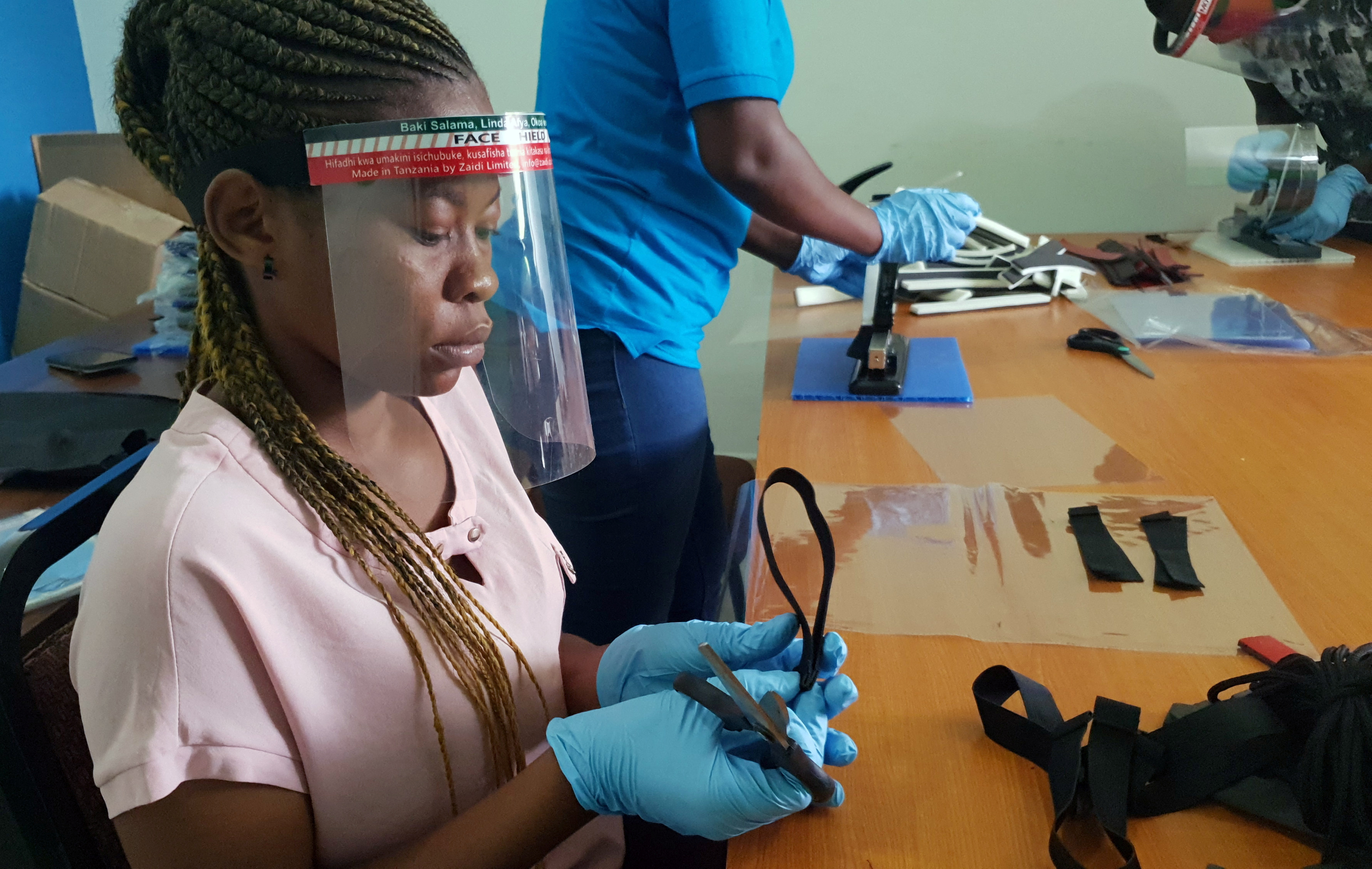 Tanzania was a country of whispers. Not even doctors were free to talk about covid-19. They had to hide their diagnoses or share them with their patients in private, but no one could contradict the discourse of the authorities, who insisted that the Tanzanians had defeated the coronavirus with prayers. For many citizens, especially those who watched in the international media how the global pandemic was advancing through other nations, the fear of getting sick was compounded by the fear of ending up in jail.

“We journalists have seen how mortality rates have increased quite a bit, especially among people with a higher purchasing power,” recalls Sandra Kitinga (not her real name to protect her identity). “For this reason, many of us felt the responsibility to speak about these deaths, probably related to the coronavirus, although we feared the reaction of the authorities. It was normal to receive calls from the Ministry of Information, asking us for the details of our stories. If we mentioned the virus in our articles, they accused us of scaring the population.”

Under the leadership of John Magufuli, who became president of Tanzania in 2015, such intimidation to limit press freedom was so common that it became routine. The authorities targeted all journalists who, like Kitinga, questioned their decisions. In addition to losing her accreditation to cover government events, this 30-year-old reporter, who now works for one of the largest newspapers in the African country, received numerous reprimands. But that bravado didn’t stop her.

—Did you report on covid-19, despite the threats? —

“Yes,” Kitinga replies. But we had to do it very carefully. Government censorship forced us to imagine all kinds of tactics to keep working. For example, in the newspaper with which I collaborate, we wrote about the growth of “pneumonia” cases in Tanzania on the same pages where we also mentioned the death toll from coronavirus in other regions of the world. Thus, readers could relate both news.

One of the most widespread conspiracy theories in Tanzania insists that vaccines sterilize women, a hoax that could explain why the number of immunized men is almost double that in the case of women

Those whispered days lasted until April 6, 2021, two weeks after the sudden death of President John Magufuli. At that time, his successor, President Samia Suluhu Hassan, decided to give a change of direction and promote a commission of experts to investigate the state of the pandemic in the territory. A short time later, his Government confirmed the presence of the new coronavirus. The images of her cabinet with masks, as well as those of the president receiving the vaccine against that disease, became symbols of a change of course.

However, this transformation is happening at a slower pace than expected. Not even the media campaign to talk about covid-19 that Hassan promoted has erased the marks of 10 months of denial speeches. The scars of the previous Administration still darken this country: they are noticeable both in the offices of doctors, who avoid all conversations on the subject because they consider them controversial, and in the streets, where only a handful of passers-by wear masks.

The madness began in June 2020, when, according to President Magufuli, Tanzania became a coronavirus-free country. Therefore, it was not necessary to follow the precautions that the health authorities dictated in the rest of the world. The Tanzanians could continue with their routines. Instead of wearing a mask or getting vaccinated, the Minister of Health, Dr. Dorothy Gwajima, proposed three alternatives on state television: pray; ingest a concoction of ginger, garlic, and lemons, and inhale herbal vapors.

Ten months after Magufuli’s death (March 17, 2021), the president’s speeches endure both on the street and in political circles. Parliamentarian Josephat Gwajima, who is also an evangelical pastor with millions of followers, has declared war on the health regulations that the Tanzanian president is now proposing. In this pulse, Gwajima insists that vaccines modify human DNA to the point of transforming us into zombies, among other unscientific theories.

Parliamentarian Josephat Gwajima insists that vaccines modify human DNA to the point of transforming us into zombies, among other unscientific theories

Hand in hand with President Magufuli – who liked to identify himself in public as a highly religious person – the churches became the mouthpiece of many conspiracies about covid-19, reaching all corners of this nation. But religious centers are not the only spokespersons for these theories. Social networks, as well as word of mouth, are also playing an important role.

Conspiracies, in fact, are still an obstacle to the immunization campaign. So far, health authorities have vaccinated just over 2.11% of its 57 million citizens – 1.2 million doses administered, according to government data – one of the lowest rates on the planet. The Government announced its intention to vaccinate at least 60% of the population, but many people have refused to be inoculated.

One of the most widespread conspiracy theories in Tanzania insists that vaccines sterilize women, a hoax that could explain why, in this country, the number of immunized men is almost double that in the case of women.

“You would be surprised how widespread these rumors are,” he launches Syriacus Buguzi, a Tanzanian science journalist, from his home in Dar es Salaam. “According to a recent medical study, still unpublished, a good part of the country’s health workers also believe in these hoaxes related to the coronavirus and its vaccines. I’ve heard all kinds of theories. Without going any further, this morning I heard that the scientists who designed the vaccines want to change the religious beliefs of the people who get immunized.

See also  Paul McKenna: Celebrity hypnotist is on a quest to discover where his grandfather taught in Edinburgh, can you help?

“This scenario is unsustainable”

Not all citizens refuse vaccinations. Judith Kitomari (not her real name to protect her identity) never accepted the denial speeches of her president. On the street, or during conversations with acquaintances, he hid his opinions. But instead of approving of the government’s measures, the 27-year-old safari guide listened with concern. As her savings disappeared from her pockets, Kitomari felt that Tanzania was entering a maze with no way out. Although the authorities kept international borders open at all times, restrictions in other countries caused the number of visitors to plummet. In this nation, where up to 11.7% of its Gross Domestic Product (GDP) depended on tourism, this was a blow to millions of people, from drivers to cooks and hotel receptionists. For this reason, Kitomari has no doubts: “We need to get back to normality. This scenario is unsustainable. I decided to get vaccinated to contribute my grain of sand. We all want this pandemic to end.”

The government began listing positive coronavirus cases in late July, a year after President Magufuli froze the counter. However, in reality, no one knows precisely the status of this epidemic. Health authorities have registered 26,480 infections, as well as 734 deaths related to this disease. But they admit the real numbers are probably much higher: Up to 80% of infected Tanzanians don’t even know they’ve gotten sick because they don’t have symptoms or go to a hospital, according to government estimates.

Similar scenarios are repeated in the rest of the continent. According to the World Health Organization (WHO), the authorities detect one in seven infections on African soil. To the low number of tests carried out is added, among other factors, the youth of its population, more likely to get sick with covid-19 without developing serious symptoms. The median age of Tanzania – about 18 years old – is more than twice lower than that of Spain, which is over 44.

While the pandemic spreads silently, with the omicron variant as the latest threat, the symptoms of the economic deterioration of this global crisis are much more visible. The East Africa Business Council (EABC) put figures on this disaster: in 2020, this region lost more than 4.2 billion euros, as well as two million jobs, due to the collapse of tourism.

The journalist Syriacus Buguzi uses resounding words to describe the Magufuli government: his regime, in addition to promoting an avalanche of hoaxes about the coronavirus, also created an epidemic of fear. During the first days of her term, President Hassan allowed the reopening of several media outlets banned by the previous Administration, but deeper reforms are still needed to restore freedom of expression to Tanzanians.

“The Tanzanian state has always had a tight grip on all institutions,” says Buguzi. “Magufuli simply took advantage of this fact to further increase his power. It wasn’t difficult. On that basis, he created a series of strict laws to control the traditional media and even Internet users. For example, since July 2020, we cannot talk about pandemics or disasters unless the government authorizes us to do so.

– Is this why many Tanzanian doctors do not want to talk to us journalists, even though they are now, in theory, free to recognize that the coronavirus is present in Tanzania? we asked Buguzi.

—The laws I have named still remain in the Penal Code. Even after Magufuli’s death, many Tanzanians do not feel safe. We are not clear whether we can speak freely or not. In reality, only a few doctors dare to give their opinion freely. The previous regime created an atmosphere of fear. And he made sure that fear was great. True fear.

-I disagree. I have talked to many health workers. My conclusion is that they, like the vast majority of the Tanzanian population, do not identify the coronavirus as a major problem for this country. Many Tanzanians now think that covid-19 attacks only Western people. And, because hospitals aren’t as overcrowded with patients with the disease, doctors aren’t too worried about it.

According to Buguzi, Tanzanians simply want to forget about the coronavirus as soon as possible. Without looking back.