Skip to content
Home News Covid 19: First portrait of omicron: it grows exponentially and it is not clear that it is milder | Science 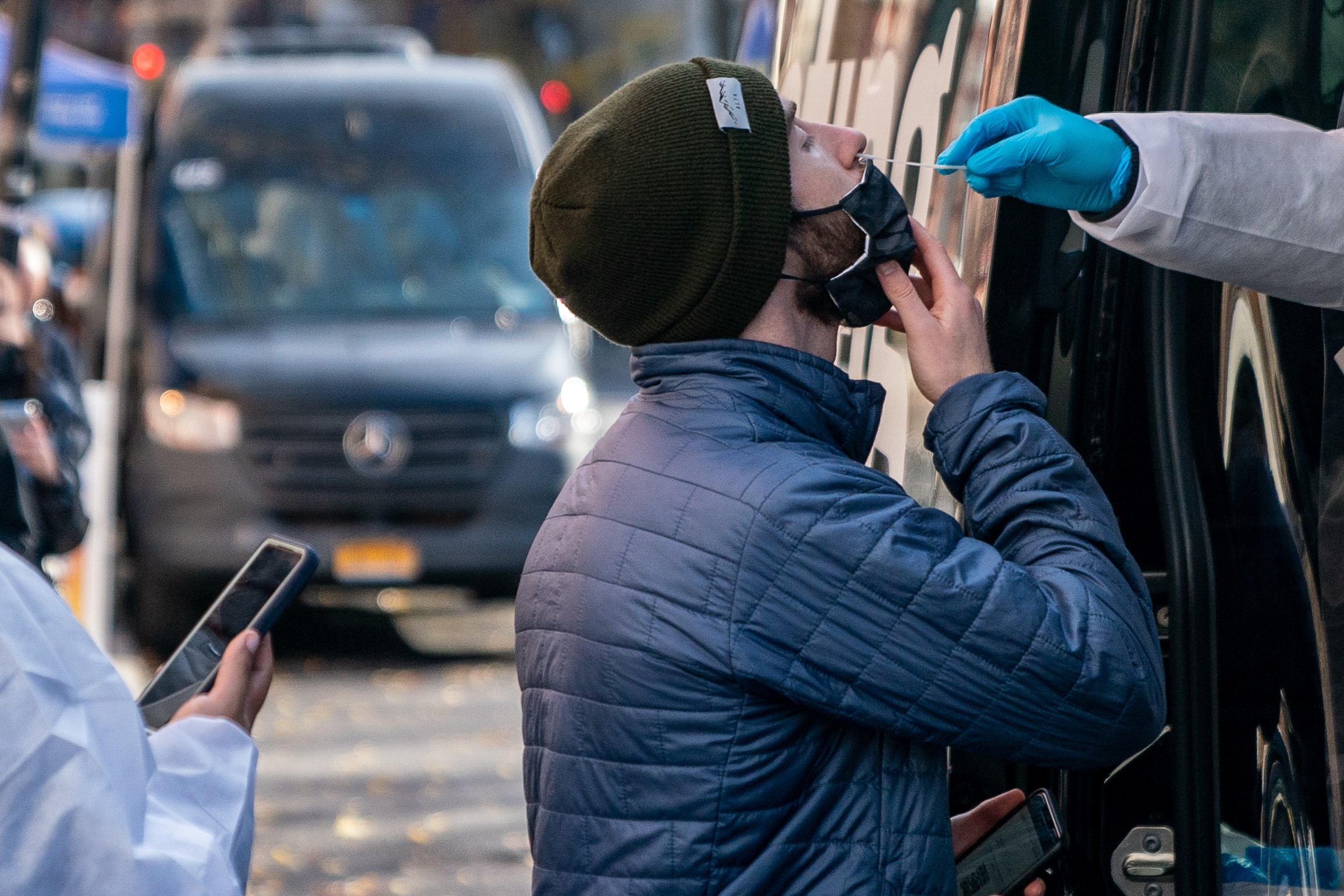 The scientific community has already sketched a first portrait of omicron, the new version of the coronavirus detected three weeks ago in southern Africa. The variant, with an unusual number of mutations, is spreading across the planet at a speed never seen in its predecessors. The European authorities have warned that the growth of omicron is “exponential”. Cases are doubling every other day, according to British data. Omicron is capable of multiplying 70 times faster in human bronchi than the still dominant variant, the delta, according to a preliminary study from the University of Hong Kong released Wednesday. The authors, led by the renowned virologist Michael Chan, infected human cells in the laboratory and observed that omicron is very successful in the upper respiratory tract, which would explain the explosion of infections, but is 10 times less efficient than its predecessors in the lung , which suggests a lower lethality.

Chan himself has stressed that “the severity of the disease in humans is not determined only by the multiplication of the virus, but also by the immune response of the infected person, which can lead to a cytokine storm [una reacción inmunitaria que puede ser mortal]”. Chan is not optimistic. “By infecting many more people, a highly infectious virus can cause more serious cases and deaths, although the virus itself is less pathogenic,” he warned in a statement. A report from the European Center for Disease Prevention and Control, published this Wednesday, considers it “very likely” that the arrival of omicron will increase hospitalizations and deaths compared to those expected with the delta variant.

Many preliminary studies suggest that omicron is capable of deceiving the first line of human defenses – antibodies induced by the vaccine or by a previous infection – and causing new mild infections in those vaccinated with only two doses and in people who already they have passed the covid. The effectiveness of two Pfizer punctures in preventing these mild cases falls after four months to 35% compared to omicron, according to an interim analysis by the UK Health Safety Agency. With two injections of AstraZeneca, the protection would be 0%, always speaking of mild infections.

The same study indicates that a third dose with Pfizer raises the protection to 75%, in the case of those who were already vaccinated with two punctures of that brand, and to 71%, in the case of those who received AstraZeneca, according to one of the co-authors, the Spanish-British epidemiologist Jamie López Bernal. “I suggest that everyone get the booster shot when their turn comes. With the experience we have with other variants, it is very likely that the protection against serious complications of covid is greater than the protection against infection, so those who have not received the first two doses should be vaccinated as soon as possible ”, explains López Bernal .

I suggest everyone get the booster shot when their turn comes

A large outbreak in Norway illustrates the ease of omicron to spread even among vaccinated people. On November 26, 117 workers from the renewable energy company Scatec held a Christmas dinner at a restaurant in Oslo, with one of the participants recently arrived from South Africa. Virtually all were vaccinated, but 74% ended up infected by omicron. Those affected, with an average of 38 years, have mostly had a cough, fatigue, snot, sore throat and fever, but at the moment there are no hospitalizations, according to a study by the Norwegian Institute of Public Health released this Thursday. The authors emphasize that symptoms generally appeared three days after the party, faster than with the delta variant (4.3 days) or the previous ones (five days).

If the omicron variant viruses manage to dodge the antibodies, they find a second line of defense, that of T lymphocytes, white blood cells that, once the mild infection begins, can prevent it from developing into a serious disease. The American vaccinologist Phil Krause, president of the World Health Organization (WHO) group of experts on covid vaccines, stressed this Thursday that this barrier of T lymphocytes, both that generated by vaccines and that resulting from previous infections , “Remains largely intact” versus omicron.

South African health insurance company Discovery released encouraging results on Tuesday. Their preliminary analyzes of more than 200,000 cases suggest that two doses of Pfizer’s vaccine maintain 70% effectiveness – 60% in septuagenarians – in avoiding hospitalizations for the omicron variant. It is a drop from the 93% that was recorded with the delta variant, but it is still a high protection. However, the effectiveness of two Pfizer punctures to prevent any type of infection – most of which would be mild or asymptomatic – would barely reach 33%, compared to 80% previously, according to the interim report of the insurer, carried out in collaboration with the South African Medical Research Council.

Ómicron seems extremely transmittable. Discovery’s initial calculations also suggest that the risk of being reinfected is 40% higher with omicron in people who already had the delta variant – typical of 2021 – and 73% higher in citizens who were infected in the first wave of 2020 .

The true severity of the omicron-caused covid is still unknown, but whatever it may be, a flood of cases could send the healthcare system reeling. An increase in infected health workers – and forced to isolate themselves at home – could empty hospitals. Furthermore, British geneticist Jeffrey Barrett of the Wellcome Sanger Institute, has alerted in their social networks that the capacity to perform diagnostic tests for covid “can be increased in a linear way, but the demand will grow exponentially.” His prediction is unsettling: “This will happen everywhere and almost at the same time, so global supply chains will struggle.”

See also  Steven Forti: The more I hate, the more viral: why Twitter has been filled with fury at the height of the extreme right | Actuality | ICON

Duncan Robertson, a pandemic analyst at the University of Oxford, has summarized sarcastically the situation in the United Kingdom: “We will not reach a million cases a day because we do not have the capacity to do a million PCRs a day.” The biostatistician Adam Kucharski, from the London School of Hygiene and Tropical Medicine, has also raised the alarm: “I suspect that knowledge of the omicron situation in Europe is about to fall off a cliff. Demand for evidence due to the rapid growth of cases will exceed capacity. “

Even if it is hypothetically less virulent, if it is transmitted more efficiently it will end up causing severe cases of illness and death.

Virologist Isabel Sola believes that there is “an exciting question” still unanswered: if omicron really causes a less serious disease. The report by the South African insurer indicates that adults infected with omicron would have a 29% lower risk of ending up in hospital than in the first wave of the pandemic, but the authors themselves acknowledge that this data could be a mirage caused by the simple fact that, in South Africa, a high percentage of the population has already passed the covid and has more defenses than in 2020.

Irish epidemiologist Michael Ryan, director of the WHO emergency program, urged on Tuesday to protect “as soon as possible” the most vulnerable people. “We will be the happiest people in the world if we come back here in two or three weeks and say that this disease is much milder and that everything is fine. […], but this is not how this virus has behaved until now, “he warned. “That is not our experience in the three successive waves of this pandemic, so I believe that we must act now in the real world, while we collect data to understand exactly what this virus is capable of.”

See also  USA and China: The powers fight to conquer space (to control the earth) | International

Isabel Sola, from the National Center for Biotechnology (CSIC), shares the concern. “Applying the precautionary principle, with what we know of the partial loss of immunity, revaccination should be reinforced, especially of the most vulnerable. And, at the same time, reinforce the measures that help to contain the transmission of the virus: diagnostic test, mask, distance, ventilation, avoiding crowds ”, he explains. “Even in the hypothetical case that it is less virulent, if it is transmitted more efficiently it will end up causing serious cases of disease and death,” warns Sola.

The American physicist Albert Allen Bartlett repeated over and over again that the greatest limitation of the human being is his inability to understand exponential growth. That skill, however, is essential to appreciate the magnitude of the challenge that omicron poses. The concept is well understood with the classic example of paper. If you take a sheet of newspaper, say 0.01 centimeter thick to facilitate calculations, and fold it in half, the thickness will now be 0.02 centimeter. If it is folded again, it will be 0.04 centimeter. Each fold will double the thickness. If you can fold ten times, it will be more than two inches. If it could be folded 15 times, the sheet of paper would be as tall as a person. With 19 times the height of an eight-story building would be exceeded. And with only 23 folds it would shade the Eiffel Tower. That is exponential growth. And that’s the omicron challenge.

In the US, a fetus is sacred – but children in classrooms come second to guns. why?