Skip to content
Home News Covid-19: Federico Martinón-Torres: “We will not end the pandemic until it is controlled globally” | Society 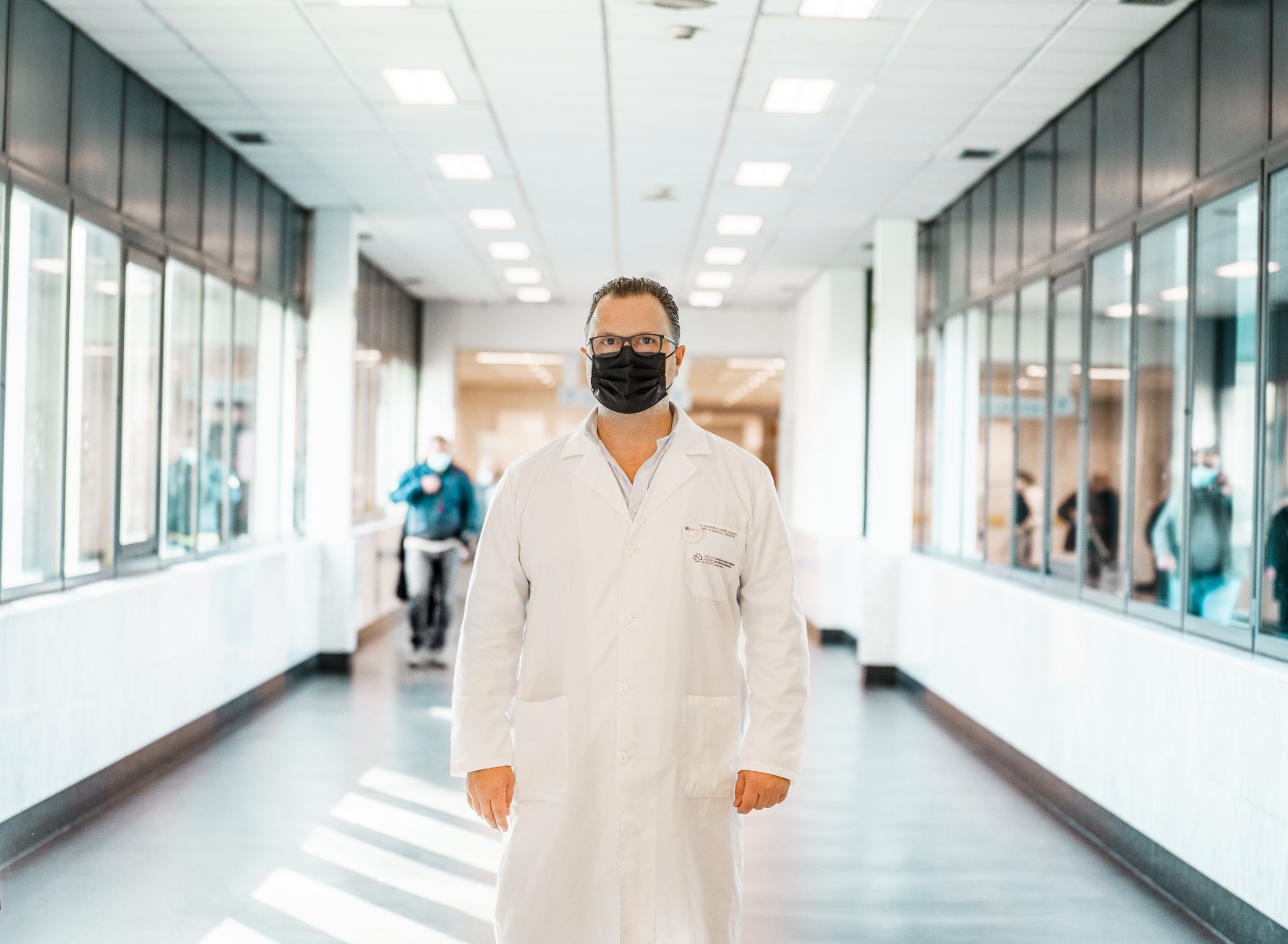 Federico Martinón-Torres (Ourense, 50 years old), member of the advisory committee on vaccines of the World Health Organization (WHO), is clear that the end of the pandemic is only possible if humanity is able to deliver immunization against the covid to all corners of the planet. Now it is no longer a problem of insufficient doses, admits the head of Pediatrics at the public hospital in Santiago de Compostela. “Inequality is a reality. We had a chance as a civilization to do things better and they haven’t been done. It is a matter of priorities and political commitment ”, laments the researcher, in charge of coordinating the only collaborating center on vaccine safety that the WHO has in Europe, based in the capital of Galicia.

Ask. Why does the high vaccination rate not free Spain from a Christmas similar to last year?

Answer. They have nothing to do with those of last year. We are with the same infection rates, but then the hospitals were collapsed and now the proportion of admitted who die has nothing to do with it. They are mostly people who have not been vaccinated or who have a high baseline risk. Your starting risk when you get vaccinated is different if you are 30 years old than if you are 80.

P. Does it make sense then that the alarms go off?

R. If the number of infections increases very significantly, even though the proportion of individuals who enter or die is much lower, in absolute numbers the health system may also collapse. These vaccines do not work to prevent infection, they are not sterilizing. What they do is, if you are infected, you are much less likely to be symptomatic and enter or die. They also don’t prevent you from infecting others, but you are infectious for less time.

P. The feeling spread that vaccines were the panacea.

R. We knew all this, there is no surprise. There may have been a problem of generating expectations and transmitting information. Already in animal models, before reaching humans, it was seen that these first-generation vaccines did not have a significant impact on the upper airway, which is the portal of entry for the virus. There was talk of 60%, 70%, 80% coverage [para la inmunidad de grupo], but they are not magic numbers to simply transmit to the population. They depend on many factors, not just the vaccination rate. It depends on what the virus does and what we people do. The new variants appear in each person who becomes infected, it does not matter whether it is in Europe, Africa or in any corner of the world, and to succeed they have to reach a fertile ground, that is, a susceptible population and in sufficient numbers. There are many other countries that are not vaccinating and the virus continues to evolve.

See also  Storm Gladys 2022: tips for driving in snow - how to prepare yourself and car for cold weather, and stay safe

P. Have the vaccines worked as expected?

R. The vaccines have worked so much better than we could imagine. The effectiveness is extremely high. The WHO approved an efficacy of 50% with a lower limit of 30% for a vaccine to be approved. All have had it 90%. That is why it began to speculate that the impact capacity they could have on the transmission was going to be greater. But over time it turned out that this was not the case.

P. He is critical of the fact that healthy children are vaccinated in Europe while people at risk, including infants, remain unimmunized in the rest of the world. Can this pandemic be stopped without an equitable distribution of immunizations?

R. Ómicron is the proof that no. The most advanced countries in vaccination such as Spain have entered a transition phase, but others are in a very different phase. That has taken us back to a previous point, although it is not as bad as the previous one. It is the natural evolution of the epidemiology of infections: the waves should be less intense and more bearable. Until the pandemic is controlled globally, we will not end it. We will reach better control situations like the ones we have just experienced, but we will be exposed to the variations that may occur in the virus in contexts that are more conducive to it.

P. What measures should health authorities take with the pharmaceutical sector that manufactures vaccines to avoid hoarding by the richest countries?

R. It does not depend only on the pharmaceutical sector. It is much more complex and I wish I had the answer. In addition to the will of the laboratories, there must be political and social will. There were initial plans like Covax [plataforma mundial para dar acceso igualitario a países ricos y pobres] that have not been enough. Inequality is a reality. We had a chance as a civilization to do things better and they haven’t been done. It is a question of priorities and political commitment. If the great countries of the world want that not to happen, it does not happen.

P. Should patents be released?

R. It’s complicated. Pharmaceutical companies are not NGOs, they seek to do business and earn money, but if it weren’t for them there would be no vaccines. No country, not even the US, is capable of manufacturing them by itself.

P. But they have needed public funds and humanity is living in an emergency situation.

R. Yes, but this is not a potato omelette that can be made with the recipe. There are very few countries prepared for technology transfer. Europe is not ready. Even if they give you the recipe and the money, having the necessary people to do it with all the guarantees is very difficult.

P. And are there now enough doses to vaccinate the entire planet?

R. Right now, with the production capacity and approval of the new vaccines, yes. But there are other problems. The distribution of any pharmaceutical product in these countries is complicated. Now it is not a problem of dosage and I believe that it is not a problem of budget either, but rather that there is a political effort to solve the bureaucratic obstacles of export and internal distribution and put the human and logistical resources so that the vaccine arrives. With this I do not remove responsibility from those who have it, but it is more complex than it may seem.

P. Has the Spanish population’s high degree of confidence in vaccines compared to other European countries surprised you?

R. Very pleasantly It has a lot of merit and we must be very happy, but we must not become complacent. We must take great care of this value because we are not impervious to what is happening in our environment. It is a matter of information and continuing education from children. The important thing is not that the vaccines are mandatory or not, but that you know that if you cross in red and something happens to you, it is your responsibility. The problem is not the conspiracy anti-vaccines, which are a very small fraction and have no solution. There are other speeches better elaborated, that mix scientific facts with fantastic pseudologies, that generate doubts and mistrust. The vast majority of people who are going to be vaccinated, even the most convinced, are somewhat afraid. First to the pain, but also to not being that one of a million to whom the weirdest effect in the world happens. The important thing is that, despite those doubts, you make the right decision because the balance between the information you have and the benefit you are going to obtain is the right one. If you don’t have coherent voices that give you the correct vision and there are people who can convince you otherwise, it’s over.

P. The marketing of pharmaceutical companies with rich countries and that now they do not reach the poor ones is also a breeding ground for mistrust.

R. Totally, but they have not done anything contrary to the rules that we have all consented to. You have to see the positive side. They are heroes because they saved us thanks to their ability to mass produce vaccines. We were very lucky to have them very soon and with very high efficiency. Many labs were left on the road.

P. Do you perceive more distrust in families regarding the childhood vaccine?

R. No, perhaps because I have the vision of Galicia, where the coverage is very high. The important thing is to do an honest information exercise, not to generate false expectations. You cannot promise people that if they get the vaccine, they will never get an infection again because it is a lie. You create disappointment and spend a cartridge for the next time you need me to trust you. With the data we have on eight million vaccinated children, I reaffirm myself that the vaccine does not have any safety problem in that age group. But the benefit to healthy children is marginal because they defend themselves well against infection. It is small compared to the one in risk groups or with other vaccines that are not being used. It squeaks me that they are vaccinated with covid and not with meningococcus or papilloma. It is time for the calendar to be updated and as good as that of other countries.

P Should there be a third dose under 40 years of age? There is already talk of a fourth.

R. It is likely that the regimen with these vaccines is not two doses, but three. We are learning as vaccines are given. Are we going to need annual doses? Nobody knows. I believe that those at very high risk, the immunosuppressed, may continue to need reinforcements. In the case of the rest, it will depend on the strategy and the objective profit that is obtained.

P. Is there already the capacity to manufacture adaptable vaccines to the new variants in a short time?

R. Yes. If we were able to create a vaccine in less than a year, adapting it and modifying its composition is easy from a technical point of view. Then you have to adapt the regulatory system to be able to quickly validate them. The question is whether we need them. We still do not have an answer because the vaccines so far work well.